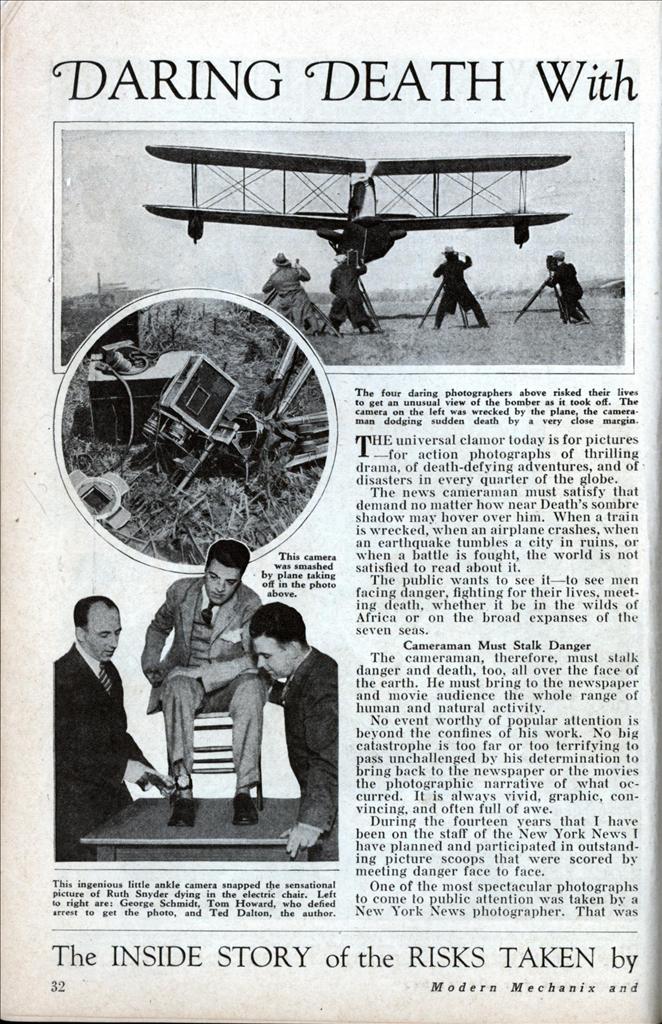 Why wasn’t De Pinedo rescued? Why couldn’t mechanics save him if photo sleuths got close enough to take tragic shots—?

Why do news cameramen dare death, go to any length to get pictures of executions, burning munitions factories, gang wars—?

Ted Dalton, camera ace, gives the answers in this thrilling yarn about Unsung Knights of the Shutter!

THE universal clamor today is for pictures —for action photographs of thrilling drama, of death-defying adventures, and of disasters in every quarter of the globe.

The news cameraman must satisfy that demand no matter how near Death’s sombre shadow may hover over him. When a train is wrecked, when an airplane crashes, when an earthquake tumbles a city in ruins, or when a battle is fought, the world is not satisfied to read about it.

The public wants to see it—to see men facing danger, fighting for their lives, meeting death, whether it be in the wilds of Africa or on the broad expanses of the seven seas.

Cameraman Must Stalk Danger The cameraman, therefore, must stalk danger and death, too. all over the face of the earth. He must bring to the newspaper and movie audience the whole range of human and natural activity.

No event worthy of popular attention is beyond the confines of his work. No big catastrophe is too far or too terrifying to pass unchallenged by his determination to bring back to the newspaper or the movies the photographic narrative of what occurred. It is always vivid, graphic, convincing, and often full of awe.

During the fourteen years that I have been on the staff of the New York News I have planned and participated in outstanding picture scoops that were scored by meeting danger face to face.

One of the most spectacular photographs to come to public attention was taken by a New York News photographer. That was the sensational picture of General Francesco De Pinedo’s blazing plane with the flyer trapped in it, burning to death.

A gruesome picture, to be sure, but on the other hand no more shocking than the word picture of the same episode by capa- ble reporters. Perhaps I am prejudiced, but I believe this picture had more of the dramatic and tragic than any written story. The cameraman who took that picture had to remain calm while death struck before his very eyes.

Do Pinedo was attempting to fly from Floyd Bennett Field, Long Island, to Bagdad. On the morning scheduled for the hop-off, I had a chartered plane at the field..

It was stationed a little distance hack of De Pinedo’s. It was faster than the general’s plane and could keep up with him until we obtained the necessary pictures showing the take-off. In addition I had three photographers posted at intervals along the run-way. The third man was at the end of the take-off course. This arrangement assured us of a complete pictorial reproduction of the flight down the runway.

As De Pinedo started off he was also trailed by a motorcycle with a side-car, carrying lire-fighting apparatus to light any blaze which might break out. Every plane starting on a hop is followed by this motorcycle.

De Pinedo shot down the runway and on reaching close to the end of it he realized he was not going to lift himself over the fence. Rather than dive into the gully on the other side of the fence, he suddenly swerved off the course and careened over, directly in front of Bill Casselman, a News copy editor with whom photography is a hobby.

He kept cool in the face of this tragedy unraveled at his very feet, and “shot” one of the most sensational pictures that has ever been made. His reward was a handsome bonus.

There was no possible way of saving De Pinedo. The motorcycle fire fighter tried in vain to extricate the aviator from the flames and was so badly burned he had to be taken to a hospital.

The photograph that caused the greatest sensation’ among newspaper readers was the picture of Ruth Snyder dying in the electric chair. She and Judd Gray were condemned to death for the murder of Albert Snyder, a magazine art director. My orders were to get a picture of the electrocution. It was a laconic command, but it was up to me to produce the picture. I learned that a photograph of an execution had never been made at Sing Sing prison.

The first problem I was up against was in selecting the right man for the job. He had to be a stranger to New York photographers and reporters. Other newspapers were planning to get the same picture and prison authorities were determined to keep all photographers out. Naturally if other photographers who were barred noticed that one of my men “crashed,” they would certainly “squawk.”

Tom Howard, crack photographer of The Chicago Tribune, was enlisted for the special service, he decided that a Baby lea camera with a Zeiss lens, described as F4.5, which is a medium speed lens, would be the necessary apparatus. We held secret meetings in a hotel room in a quiet section of the city, where no one would suspect what we were planning or recognize us and lead to a revelation of our designs. We tried attaching the little camera to various its of his body. At first we experimented a good deal with Tom Howard’s chest area, figuring that it would be in line with the subject. We found that breathing interfered with the exposure. It was surprising, too, how the heart-beat alone was sufficient to throw it off. Finally we decided to attach the camera to his ankle, hitching it to a steel clamp there. For an entire week we carried on our experiments in the hotel room under light and distance conditions we anticipated would prevail on the night of the execution in the Sing Sing death house. We perfected the pose so that Howard could keep the focus steady for 30 to 40 seconds.

Getting the Death Chamber Picture

The next problem was to get Tom Howard the front row in the death chamber. An ankle camera would be of no use behind that line, we arranged to have two reporters with Howard, each of the trio was to make an attempt to grab front row bench. As it happened, Howard got a little lost in the scramble, but one of the huskier reporters survived the crush and surrendered a front seat to Howard. The rest is history. Tom Howard got the picture which will forever remain an epic in the annals of news photography. It was a chance in ten thousand, and he made it. In the foreign field movie and newspaper cameramen often dare death to bring to the public graphic details of major world events. When the Japanese and Chinese forces were fighting in Shanghai, unarmed cameramen calmly ground away and reloaded plate after plate while bullets and shells fell all around them.

During the late uprisings in Cuba cameramen were on the job pictorially recording a revolution in the midst of angry mobs and whistling bullets. In a recent riot, in which six persons were killed and fourteen wounded, Joe Gibson, 46-year-old newsreel photographer, was shot in the leg.

To bring thrills to the public, cameramen have ventured to the very edge of roaring volcanoes and as molten lava rolled down toward them snapped pictures of volcanoes in eruption, Among the most thrilling of these was the moving picture of the eruption of Krakatoa, one of the most unusual and active submarine volcanoes, located in the Sunda Strait between Sumatra and Java.

Krakatoa has erupted as many as 16,000 times in twenty-four hours. In 1883 its eruption destroyed the island at its base and caused a water wave 100 feet high that overwhelmed the coasts of islands for hundreds of miles. As a result 36,000 people were drowned and the wave, continuing around the Cape of Good Hope, was felt in the English Channel, 11,000 miles distant.

Yet J. H. Bekker, cameraman in the service of the Dutch government, dared to go within 150 feet of the island to obtain a sound moving picture of one of Krakatoa’s recent spectacular outbursts.

He risked his life to make a record of the great spectacle while tons of lava, rock, molten glass, sulphuric gas, live steam and columns of water thousands of feet high almost engulfed his boat. During a flight over the volcano, a wing of Bekker’s plane caught fire from burning lava and the cameraman almost lost his life.

The finest sea disaster picture ever taken were made by an amateur with an ordinary folding camera. They were the photos of the sinking of the Vestris in 1928 and the photographer was Fred Hanson, a member of the crew of the ill-fated vessel.

While passengers and crew struggled for their lives on the sinking ship, Hanson risked his life to record the stark realism of tragedy at sea. He escaped just before the ship went down.

A noteworthy picture assignment which illustrates how news cameramen face perils was the coverage of the big arsenal explosion at Denmark, New Jersey. The terrors of No Man’s Land and Chateau Thierry were all crowded hundred-fold into the eight hours during which the explosions roared at the government arsenal.

Al Willard, a demon photographer if there ever was one, broke through all lines, with shells popping on all sides of him, mounted to a 100-foot tower in the midst of the blasting and there he “shot” away to the accompaniment of a booming serenade. His escape from anything but trivial injuries was miraculous.

News cameramen often have to pick precarious spots for their “act.” Often they must stand at dizzy heights on the ledge of a skyscraper to get a special parade scene or show work going on across the street. As stunt-men they figure the professionals who walk wires and dive from heights into ten-foot tubs are pikers compared to them. It’s a part of every photographer’s daily routine to expose himself to some perilous, breath-taking adventure.

Although it is seldom chronicled, a news photographer runs a greater chance of breaking his neck than some daredevil who is performing a stunt for him. But you seldom see that side of it.

Riots are mighty tough assignments on photographers. When cops and rioters or strikers are battling and bullets enter the fracas, somebody is bound to get hurt, but the “photogs” stick through the thick and thin of it to get their pictures. I recall some time ago when Passaic, New Jersey, policemen went on a club- he cannot pause to inquire as to the weather. He can not wait until ideal conditions prevail. He must go or the scene he is after will no longer exist and a rival will beat him to it.

Lieut. Eddie Dowling of my staff was covering army maneuvers from the air not long ago when the plane he was riding dove into New York Bay. A parachute jump was out of the question because the plane was too close to the water. A fireboat picked him and the pilot up, and, after a brief spell of recuperation, he was back in action again—all set for new adventures.

The news cameraman of the newspapers and the movies is the friend of the high and low. That’s all in a cameraman’s life.