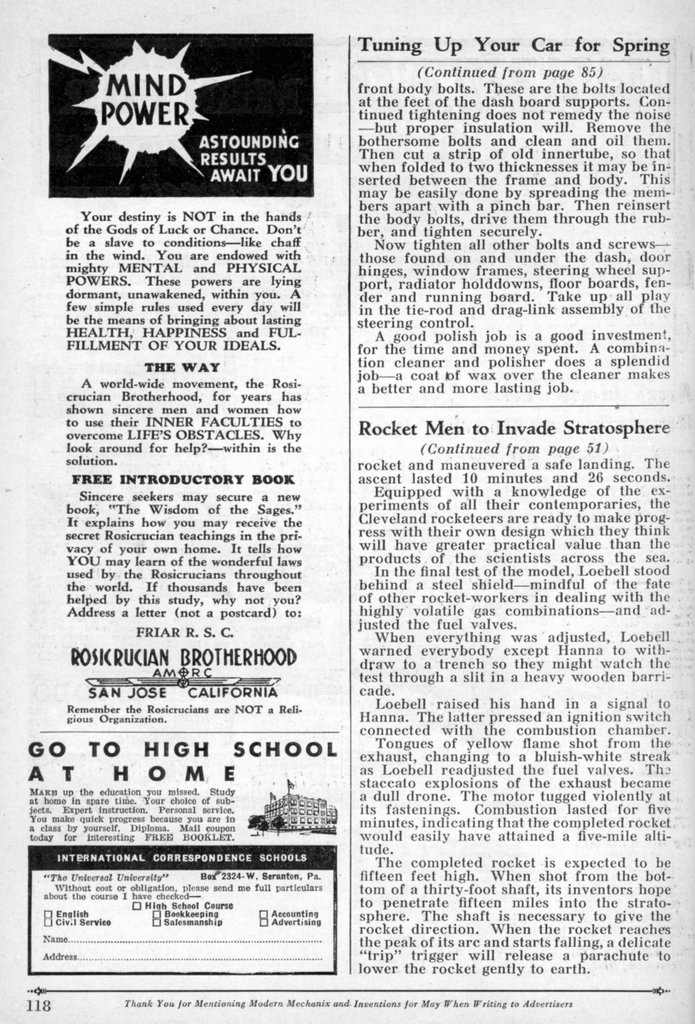 Such information as emanated from the secrecy surrounding Tilling’s operations at Osnarbrueck, Germany, has since been in the possession of the Cleveland Rocket

Society’s guiding geniuses. They plan to adopt the Tilling heritage and carry his work to further perfection.

Ernst Loebell and his assistant, Ted Banna, have also investigated another secret German rocketâ€”that of the famous Fischer brothers, details of which have also been closely guarded. The Fischers have achieved the biggest advance thus far in the field of passenger rocket flying.

The Fischers pursued their experiments on the island of Rugen in the Baltic Sea under the auspices of the German War Ministry. Otto Fischer, brother of Bruno, who designed the rocket, was shot up 32,-000 feet, more than six miles, into the air in a 24-foot steel projectile.

At the peak of the rocket’s trajectory, Otto released a parachute attached to the

rocket and maneuvered a safe landing. The ascent lasted 10 minutes and 26 seconds.

Equipped with a knowledge of the experiments of all their contemporaries, the Cleveland rocketeers are ready to make progress with their own design which they think will have greater practical value than the products of the scientists across the sea.

In the final test of the model, Loebell stood behind a steel shieldâ€”mindful of the fate of other rocket-workers in dealing with the highly volatile gas combinationsâ€”and adjusted the fuel valves.

When everything was adjusted, Loebell warned everybody except Hanna to withdraw to a trench so they might watch the test through a slit in a heavy wooden barricade.

Loebell raised his hand in a signal to Hanna. The latter pressed an ignition switch connected with the combustion chamber.

Tongues of yellow flame shot from the exhaust, changing to a bluish-white streak as Loebell readjusted the fuel valves. The staccato explosions of the exhaust became a dull drone. The motor tugged violently at its fastenings. Combustion lasted for five minutes, indicating that the completed rocket would easily have attained a five-mile altitude.

The completed rocket is expected to be fifteen feet high. When shot from the bottom of a thirty-foot shaft, its inventors hope to penetrate fifteen miles into the stratosphere. The shaft is necessary to give the rocket direction. When the rocket reaches the peak of its arc and starts falling, a delicate “trip” trigger will release a parachute to lower the rocket gently to earth.