Popular Science
Issue: May, 1939
Posted in: General
No Comments on Dart-Shooting Fish Gun Has Pistol Grip (May, 1939) 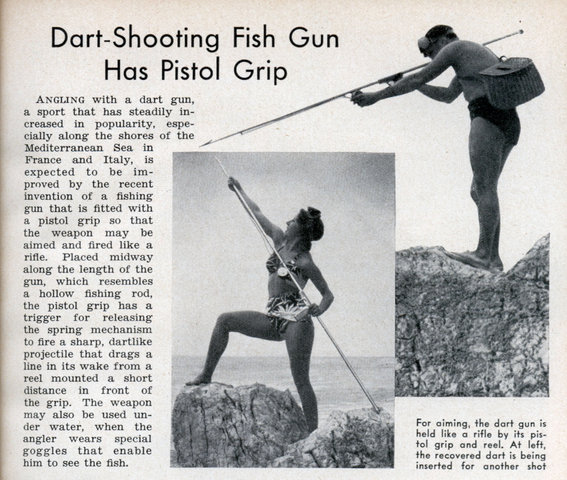 Angling with a dart gun, a sport that has steadily increased in popularity, especially along the shores of the Mediterranean Sea in France and Italy, is expected to be improved by the recent invention of a fishing gun that is fitted with a pistol grip so that the weapon may be aimed and fired like a rifle. Placed midway along the length of the gun, which resembles a hollow fishing rod, the pistol grip has a trigger for releasing the spring mechanism to fire a sharp, dartlike projectile that drags a line in its wake from a reel mounted a short distance in front of the grip. The weapon may also be used under water, when the angler wears special goggles that enable him to see the fish.