Check out the image on the second page and see if you can determine which is the live horse and which is stuffed. 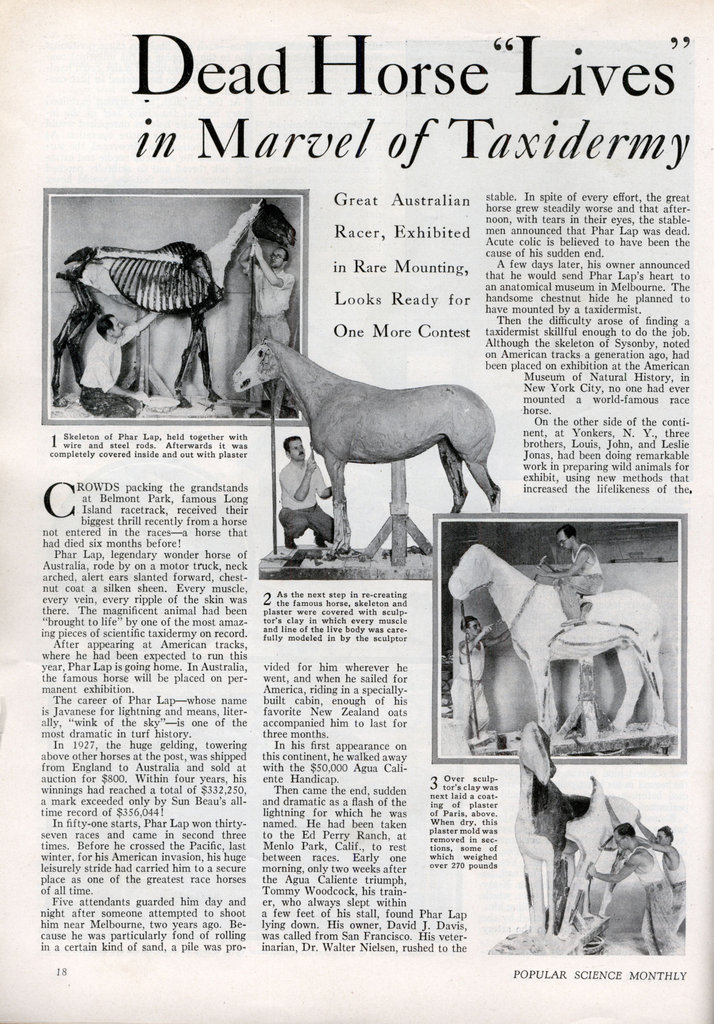 CROWDS packing the grandstands at Belmont Park, famous Long Island racetrack, received their biggest thrill recently from a horse not entered in the racesâ€”a horse that had died six months before!

Phar Lap, legendary wonder horse of Australia, rode by on a motor truck, neck arched, alert ears slanted forward, chestnut coat a silken sheen. Every muscle, every vein, every ripple of the skin was there. The magnificent animal had been “brought to life” by one of the most amazing pieces of scientific taxidermy on record.

After appearing at American tracks, where he had been expected to run this year, Phar Lap is going home. In Australia, the famous horse will be placed on permanent exhibition.

The career of Phar Lapâ€”whose name is Javanese for lightning and means, literally, “wink of the sky”â€”is one of the most dramatic in turf history.

In 1927, the huge gelding, towering above other horses at the post, was shipped from England to Australia and sold at auction for $800. Within four years, his winnings had reached a total of $332,250, a mark exceeded only by Sun Beau’s all-time record of $356,044!

In fifty-one starts, Phar Lap won thirty-seven races and came in second three times. Before he crossed the Pacific, last winter, for his American invasion, his huge leisurely stride had carried him to a secure place as one of the greatest race horses of all time.

Five attendants guarded him day and night after someone attempted to shoot him near Melbourne, two years ago. Because he was particularly fond of rolling in a certain kind of sand, a pile was provided for him wherever he went, and when he sailed for America, riding in a specially-built cabin, enough of his favorite New Zealand oats accompanied him to last for three months.

In his first appearance on this continent, he walked away with the $50,000 Agua Caliente Handicap.

Then came the end, sudden and dramatic as a flash of the lightning for which he was named. He had been taken to the Ed Perry Ranch, at Menlo Park, Calif., to rest between races. Early one morning, only two weeks after the Agua Caliente triumph, Tommy Woodcock, his trainer, who always slept within a few feet of his stall, found Phar Lap lying down. His owner, David J. Davis, was called from San Francisco. His veterinarian, Dr. Walter Nielsen, rushed to the stable. In spite of every effort, the great horse grew steadily worse and that afternoon, with tears in their eyes, the stablemen announced that Phar Lap was dead. Acute colic is believed to have been the cause of his sudden end.

A few days later, his owner announced that he would send Phar Lap’s heart to an anatomical museum in Melbourne. The handsome chestnut hide he planned to have mounted by a taxidermist.

Then the difficulty arose of finding a taxidermist skillful enough to do the job. Although the skeleton of Sysonby, noted on American tracks a generation ago, had been placed on exhibition at the American Museum of Natural History, in New York City, no one had ever mounted a world-famous race horse.

On the other side of the continent, at Yonkers, N. Y., three brothers, Louis, John, and Leslie Jonas, had been doing remarkable work in preparing wild animals for exhibit, using new methods that increased the lifelikeness of the, subjects. Davis heard of their work and turned the reproduction of Phar Lap over to them.

Twice a day for two months, in preparation for the work, Louis Jonas visited the Empire City Track, in Yonkers, to watch the horses in their workouts. He studied them in every detail, paying special attention to the muscles of the legs. In addition, albums of photographs of the famous Australian racer were gone over as part of the painstaking study that preceded the four and a half months of intensive labor required for the actual mounting. Photographs, made during this time exclusively for Popular Science Monthly, illustrate the different phases of the work.

As a first step, the bones of Thar Lap’s skeleton were carefully fitted together and held in place by means of wire and steel rods. Then a thin layer of plaster was applied. This was allowed to harden and then sculptor’s clay was spread over it.

Combining the art of the sculptor with that of the taxidermist, Louis Jonas then modeled the clay until every tendon and muscle was reproduced exactly as it had appeared in real life. Next, over the clay, the three brothers spread an inch-and-a half-thick layer of plaster of Paris. U-shaped steel bars were attached to each side to prevent breakage. When the plaster was thoroughly dry, it was removed in sections, some weighing 270 pounds, to form the negative mold in which the permanent base would be built up.

The inside of each section of the mold was carefully coated with wax and strips of roofing paper, which had been soaked in paste, were pressed along the entire inside. Three other layers of paper followed, then two layers of burlap, soaked in a special composition plaster, and finally, an additional three layers of paper.

For a week, the paper and burlap remained in the mold to dry. At the end of that time, it was easily removed, forming a hard shell of unusual strength which reproduced every minute ridge and depression of the original clay model. In the meantime, the clay model had been taken down and the skeleton prepared for shipment to Australia, where it will be placed on permanent exhibition.

The sections of the hardened paper and burlap were then joined together by means of nails hammered into wooden supports that form part of the wood-and-steel framework which braces the interior of the shell. Coatings of shellac were painted on the exterior, sawdust was sprayed on, and other coats of shellac applied. The main base was complete. Only the fine touches remained to be put on.

One of these fine touches was reproducing the veins, especially in the legs. To do this, pieces of rope were immersed in paste and then glued to the form in the exact positions where the veins of the original animal had been. Close-up photographs of Phar Lap’s “million dollar legs,” as well as extensive anatomical charts, aided in this phase of the work.

When it was finished, the final step began. This was placing the skin on the completed mounting. An important new discovery, made by the Jonas brothers, was employed at this stage to increase the remarkable fidelity of their reproduction.

It is a special flexible plaster. It contains nine secret ingredients and was spread over the entire completed mounting under the skin. As it retains its flexibility and elasticity for some time, the new plaster permits the taxidermist to sculpture over the hide after it has been attached. By skillful pressure of the fingers and by pushing and pulling the hair this way and that, he can produce lifelike lines and ripples.

Besides attaching the skin to the form, the new plaster also protects it from future attacks by insects or other parasites.

Putting on the ears and tail, and making a few minor touches here and there, completed the work, an achievement that is receiving recognition as one of the outstanding feats of modern taxidermy.