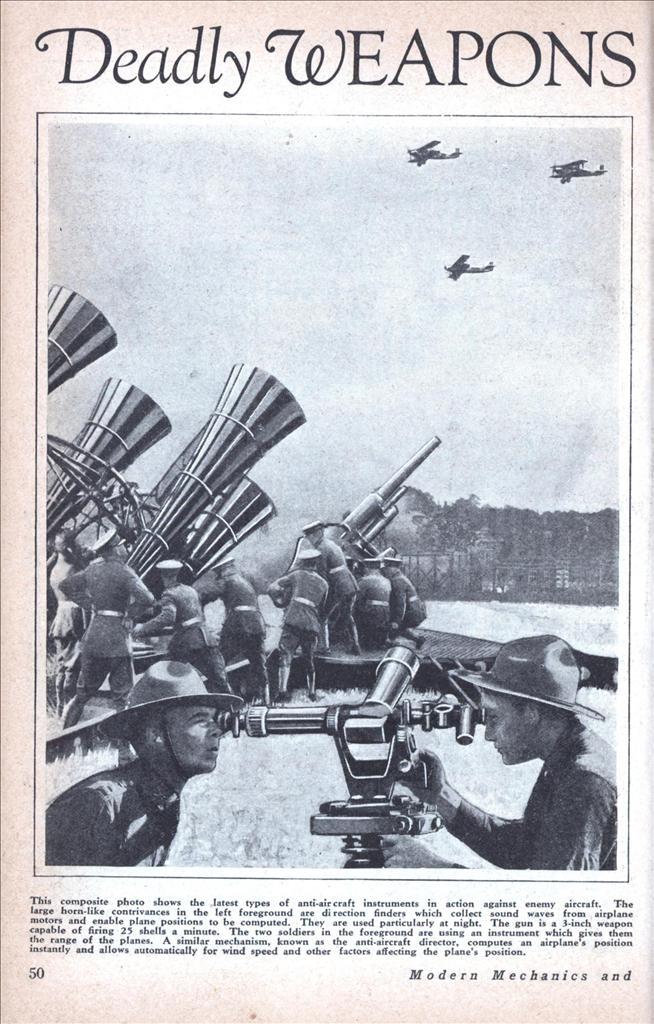 Deadly WEAPONS of the NEXT WAR

Anti-aircraft guns capable of firing 25 3-inch shells a minute, bringing down bombers miles in the heavens; range-finding mechanisms which determine an airplane’s position so accurately that they in effect make anti-aircraft guns self-aiming; amazing armored tanks which travel 70 miles an hour—these are only a few of the astonishing new war machines developed by army experts ready for deadly service in the next war.

Perhaps most marvelous of all these deadly machines is the anti-aircraft director, which is described by Capt. G. M. Wells, chief of the anti-aircraft section of the army artillery, as “a super-computing machine which automatically observes the target and computes its future position in space. Wind, temperature, and other factors which influence the flight of the plane are automatically corrected within the instrument itself.”

Detection of airplanes from the ground at night is simplified by special apparatus. Giant searchlights capable of spotting planes 8 miles away have been devised. Two large horns, mounted parallel to each other, collect sound waves from an enemy plane which enable an operator to determine approximate position. With the aid of another instrument called the acoustic corrector, the time required for the sound to travel from the plane to the horns is computed and the true position of the plane is found. These marvelously efficient anti-aircraft instruments, as well as the guns themselves, are mounted on rubber-tired trailers and can be transported swiftly as the need may arise.

Remarkable as are these anti-aircraft weapons, they are no more startling than the amazing new combat tanks recently tested by our government. This machine is known as the Christie light tank. It is a three-man affair which can travel at 70 miles an hour over smooth roads and “43 miles an hour over rough, plowed fields. It can operate with or without the familiar caterpillar treads, which can be removed in 14 minutes tor cross-country travel.

Another type of light tank, more extensively developed since the war than the new Christie model, is adapted to carry a 75 mm. gun with armored shield, cargo body for ammunition, spare parts and anti-aircraft gun mounts. Another type of vehicle now under development will be used to carry forward machine gun squads after the larger machines have overcome enemy resistance.

Naval armament has kept pace with land weapons, both as regards offense and defense. The U. S. Navy now has three huge airplane carriers which house a swarm of warplanes ranging in size from large bombers to tiny scouts. These planes take off from the deck of the mother ship, complete their missions, and return. Some of them have pontoons and can land in the sea; most of them are land planes which use the ship’s deck as base of operations.

Defensively the art of laying a smoke screen has been developed to a fine point. A smoke screen is a battleship’s most effective defense against air attack, excluding, of course, the activities of her own defending planes. Swift destroyers, running ahead of the battleships, belch forth obscuring clouds of smoke which effectively hide the big ships from enemy airmen.

One of the most recent developments in naval armament is the tiny folding-wing airplane to be carried in the hull of a submarine. England is the pioneer in this field, and she has closely guarded her secret. At the recent London air show a number of these small planes, along with a bomber credited with a speed of 200 miles an hour, were ordered withdrawn from exhibition by the government as being far too secret for public display. It is known, however, that the submarine plane is a Parnall Peto, a seaplane which folds its wings and slips inside a special compartment of the sub. It carries a pilot, an observer, and there is room for a wireless set, chart case, and a two-seat type chute. The plane has a range of two hours.

Although not strictly a new weapon of warfare, the Army has been experimenting with parachutes capable of dropping machine guns from airplanes, the purpose being to set up machine gun nests behind enemy lines in the dead of night. For daylight use the system has not yet proved itself practical owing to the comparative ease with which enemy snipers can pick off the slow moving targets.

In the field of big guns, the 14-inch “Big Berthas” of American make which demonstrated their superiority in the world war still represent the latest word in armament. A photo of one of these guns, mounted on a railway car, appears on page 51. These guns fire a projectile weighing 1400 pounds a distance of 25 miles with astonishing accuracy. During the war they were used in batteries of five, and when they went into action the enemy sought shelter holes in a hurry. These guns are also used in battleships.