Mechanix Illustrated
Issue: Sep, 1938
Posted in: Ahead of its time
Tags: environment
No Comments on Death Lurks in the River (Sep, 1938)

Very interesting article about pollution in the nations bodies of water. It would be another 34 years before the clean water act was passed. No doubt if you dig deep enough you’ll find that it was Prescott Bush and his faithful advisor Pappy Rove who caused this problem with their “Healthy Rivers” act. 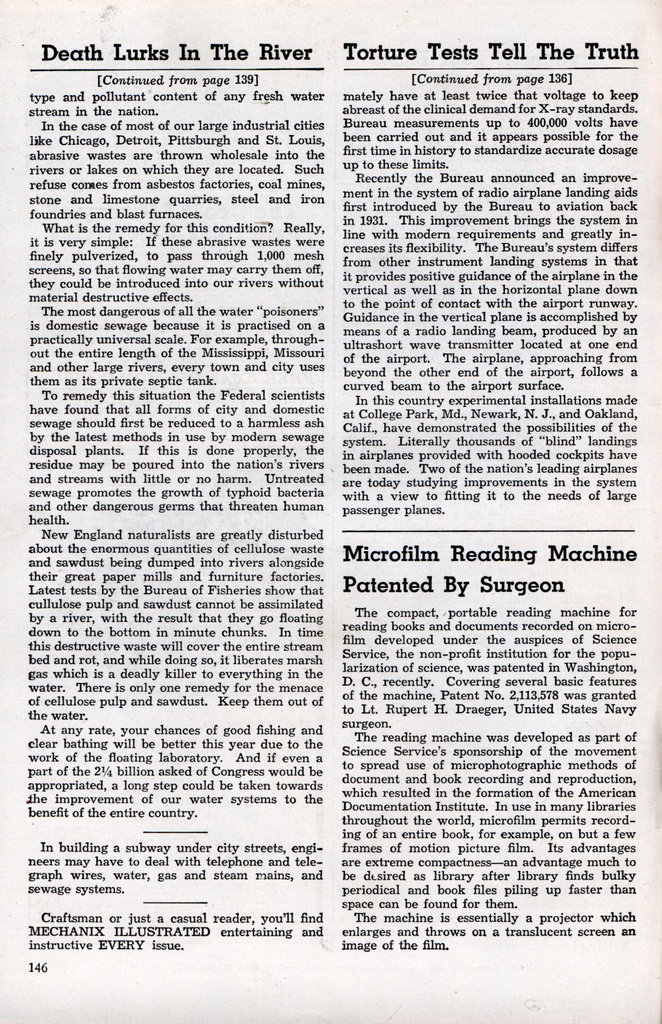 Death Lurks in the River

Cellulose and sawdust pollution in the North Atlantic, acid pollution in the Middle Atlantic, malaria in the Coastal plain, soil erosion in the Piedmont plateau, unpalatable water in the South Eastâ€”this is the dangerous condition of our coastal and inland waterways. This story tells what the government’s special floating laboratory is doing about it

WE HEAR much about pollution. Conservationists inform us that the defiling of our inland and coastal water is causing a serious health menace to human as well as to aquatic life at an alarming rate. The life or death of every type of American fresh water fish is involved: bass, trout, pickerel, pike, perch, crappie, catfish, carp, sturgeon, salmon, whitefish and many others. Our own health, particularly that of our children, is involved.

Factories and municipalities pour wastes into rivers at a rate that bodes ill for people being served by those waters. Experts rate the sulphuric acid drainage from bituminous coal mines as the most destructive of all forms of trade-waste pollution. The acid destroys metal boat bottoms, boiler tubes and steel waterlock equipment. It disintegrates concrete and filters into springs and wells. Flood overflow of acid-tainted water kills all but the hardiest vegetation. The amount of acid drained into the Ohio river system in one year was estimated by the Public Health Service at over 3,000,000 tons; losses resulting from this drainage exceed $10,000,000 a year. Abandoned mines in Pennsylvania, Ohio, West Virginia, Kentucky, Indiana, Maryland, Alabama and Tennessee have been responsible for much acid pollution.

New England and the North Atlantic States are suffering from excessive pollution of surface waters. The middle Atlantic States present a variety of problems including soil erosion in the Piedmont plateau, malaria in the coastal plain and a shortage of sewerage facilities in the densely populated areas. In the Southeast there is need for increased public-health protection in malaria-infested areas and of improvement of unpalatable water supplies. The Ohio basin is being used by mankind as a sewer, a source of water supply, an outlet for floods and a highway. Something, at least should be done for its polluted condition.

Is anything definite being done to curb the ravages of pollution?

The National Resources Committee recently made a report covering our inland and coastal water conditions, which was sent to congress by President Roosevelt. It called for an expenditure of nearly 2-1/4 billion dollars to purify and harness our water resources. No less than $135,000,000 was recommended for the New York metropolitan area alone. The Board announces that at least $15,000,000 will be needed to clean up but a single river: the drainage area of the historic Potomac, involving Virginia, Maryland, Pennsylvania and the District of Columbia. The government, at least, is not sitting back, taking it on the chin. Extensive experiments are being conducted to locate and check polluted areas and the best approach has proved to be through the Bureau of Fisheries. To this end, Dr. M. M. Ellis of the Federal Bureau of Fisheries conceived and brought into being one of the most amazing laboratories in the world.

Nothing much was said about the work of the “floating laboratory,” as it is called, for in its experimental stage it was not known whether it would be a success. But now, after Dr. Ellis has completed some 10,000 tests and scientific experiments on a good proportion of America’s navigable waters, the story can be told.

What the scientists aboard this unique craft have learned about pollution concerns every man, woman and child in the United States. Due to this work, it is probable that the fishing in your own community is being benefited this month. Heretofore it has been practically universally believed that pollution was a necessary evil. Man simply had to get rid of the wastes he created, and dumping them into the river was the accepted method. The pollution was there and it would cost too much to eradicate it. Now, however, Dr. Ellis has discovered that man may still pour a goodly proportion of his wastes into moving bodies of water and do relatively little harm.

Let us see how Dr. Ellis operates and what he has discovered. First the laboratory itself: It resembles the average Mississippi River steamboat, flat-bottomed and of slight draft. It was developed at the research base of the Fisheries Bureau at Columbia, Missouri, and is operated in conjunction with the Missouri State University. The laboratory is filled with delicate and amazing instruments invented by Dr. Ellis and is equipped with specially designed research rooms. Naturally the first step in the huge program was to determine what the reaction would be when exposed to every conceivable kind of pollutant, including domestic sewage, waste from coal mines and acid from tanning factories.

To learn this, live fish are used as the guinea pigs. They are held captive in a glass tube which is suspended over the laboratory table. This tube has both outlet and inlet, and by means of a triple valve, water from three separate sources can be introduced into it at will.

In order to use this instrument with utmost efficiency the exact defilement of the water from the different sources is first determined and then placed in three separate containers, all connecting with the tube by means of the triple valve. Each individual fish is subjected in turn to the various waste-filled waters and the precise effect is noted by Dr. Ellis.

By repeatedly using this test, the scientist can name the exact location of polluted waters that are killing aquatic life and harming humans. By knowing the chemical content of the water, he also can determine what pollution agent is doing the damage.

Another research room is used to study the effect of oil-polluted water on the nation’s aquatic life. Live fish are kept in glass jars into which oil of various types (including fresh petroleum and drained crankcase oil) and in varying amounts, is introduced. Tests conducted here prove conclusively just how much oil in fresh water is dangerous and in what locations it does the most harm. Results of the hundreds of river trips are analyzed and calculated at the headquarters laboratory at Columbia.

One section of the main laboratory is devoted to studying the salt content of river water. This pollutant comes from waste materials of ice-cream plants, salt mines and metal mines, and foundries which throw away on a large scale, refuse materials such as lead, copper, iron, arsenic and zinc. The salt content is ascertained by determining the conductivity of the water. This is done by simply shooting an electric current through it and then picking it up with a headset. In other words, instead of using a wire to conduct the current, represented in this test by telegraphic signals, the water itself is used as a conductor. The operator, picking up the signals after they have passed through the fluid, can discover immediately, by the intensity of the signals, the exact amount of salt present.

Another section of the laboratory is devoted to one of the most unusual experiments of all, involving the measuring of a live fish’s heart action! First a delicate stethoscopelike instrument is placed over the creature’s heart. This connects with a stencil which in turn is lightly placed on a revolving drum. While the fish is being subjected to waters of known pollution content, his throbbing heart reflects his reactions through the “stethoscope” to the stencil, which translates these reactions in writing on the revolving drum!

One of Dr. Ellis’ main objectives in making these tests is to reduce his pollution findings down to “standards” which may be applied to any waters not in immediate reach of the floating laboratory. These standards, when reduced to chemical formulae, can, and are being used in determining type and pollutant content of any fresh water stream in the nation.

In the case of most of our large industrial cities like Chicago, Detroit, Pittsburgh and St. Louis, abrasive wastes are thrown wholesale into the rivers or lakes on which they are located. Such refuse comes from asbestos factories, coal mines, stone and limestone quarries, steel and iron foundries and blast furnaces.

What is the remedy for this condition? Really, it is very simple: If these abrasive wastes were finely pulverized, to pass through 1,000 mesh screens, so that flowing water may carry them off, they could be introduced into our rivers without material destructive effects.

The most dangerous of all the water “poisoners” is domestic sewage because it is practised on a practically universal scale. For example, throughout the entire length of the Mississippi, Missouri and other large rivers, every town and city uses them as its private septic tank.

To remedy this situation the Federal scientists have found that all forms of city and domestic sewage should first be reduced to a harmless ash by the latest methods in use by modern sewage disposal plants. If this is done properly, the residue may be poured into the nation’s rivers and streams with little or no harm. Untreated sewage promotes the growth of typhoid bacteria and other dangerous germs that threaten human health.

New England naturalists are greatly disturbed about the enormous quantities of cellulose waste and sawdust being dumped into rivers alongside their great paper mills and furniture factories. Latest tests by the Bureau of Fisheries show that cullulose pulp and sawdust cannot be assimilated by a river, with the result that they go floating down to the bottom in minute chunks. In time this destructive waste will cover the entire stream bed and rot, and while doing so, it liberates marsh gas which is a deadly killer to everything in the water. There is only one remedy for the menace of cellulose pulp and sawdust. Keep them out of the water.

At any rate, your chances of good fishing and clear bathing will be better this year due to the work of the floating laboratory. And if even a part of the 2-1/4 billion asked of Congress would be appropriated, a long step could be taken towards the improvement of our water systems to the benefit of the entire country.