Yes, kill a snake in only eight and a half minutes! Of course this would only really work on animals that aren’t allowed to move. It seems like stepping on the snake would have been more effective. 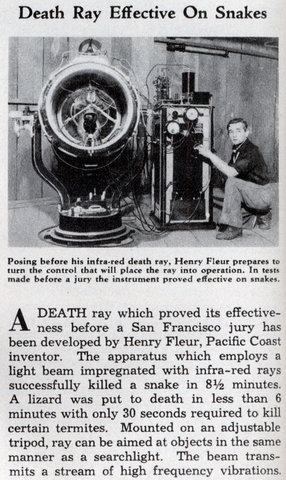 Death Ray Effective On Snakes
A DEATH ray which proved its effectiveness before a San Francisco jury has been developed by Henry Fleur, Pacific Coast inventor. The apparatus which employs a light beam impregnated with infra-red rays successfully killed a snake in 8-1/2 minutes. A lizard was put to death in less than 6 minutes with only 30 seconds required to kill certain termites. Mounted on an adjustable tripod, ray can be aimed at objects in the same manner as a searchlight. The beam transmits a stream of high frequency vibrations.