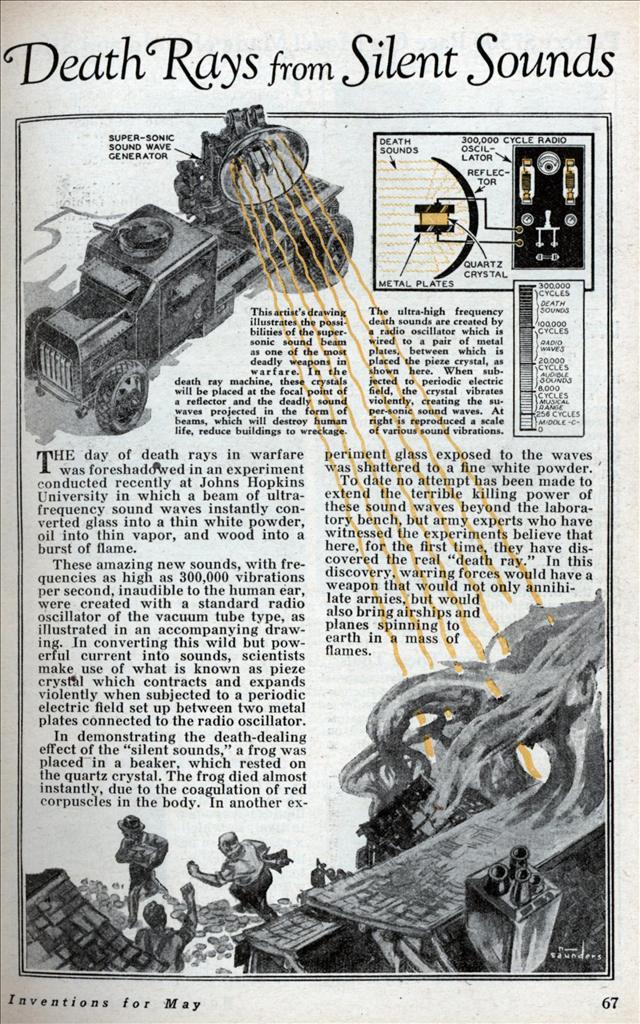 THE day of death rays in warfare was foreshadowed in an experiment conducted recently at Johns Hopkins University in which a beam of ultra-frequency sound waves instantly converted glass into a thin white powder, oil into thin vapor, and wood into a burst of flame.

These amazing new sounds, with frequencies as high as 300,000 vibrations per second, inaudible to the human ear, were created with a standard radio oscillator of the vacuum tube type, as illustrated in an accompanying drawing. In converting this wild but powerful current into sounds, scientists make use of what is known as pieze crystal which contracts and expands violently when subjected to a periodic electric field set up between two metal plates connected to the radio oscillator.

In demonstrating the death-dealing effect of the “silent sounds,” a frog was placed in a beaker, which rested on the quartz crystal. The frog died almost instantly, due to the coagulation of red corpuscles in the body. In another experiment glass exposed to the waves was shattered to a fine white powder. To date no attempt has been made to extend the terrible killing power of these sound waves beyond the laboratory bench, but army experts who have witnessed the experiments believe that here, for the first time, they have discovered the real “death ray.” In this discovery, warring forces would have a weapon that would not only annihilate armies, but would also bring airships and planes spinning to earth in a mass of flames.