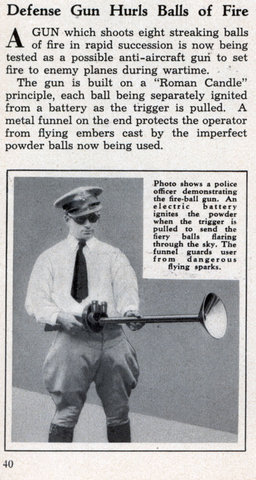 Defense Gun Hurls Balls of Fire
A GUN which shoots eight streaking balls of fire in rapid succession is now being tested as a possible anti-aircraft gun to set fire to enemy planes during wartime.
The gun is built on a “Roman Candle” principle, each ball being separately ignited from a battery as the trigger is pulled. A metal funnel on the end protects the operator from flying embers cast by the imperfect powder balls now being used.