Modern Mechanix
Issue: Sep, 1930
Posted in: Aviation
No Comments on Defying Death in a Parachute (Sep, 1930) 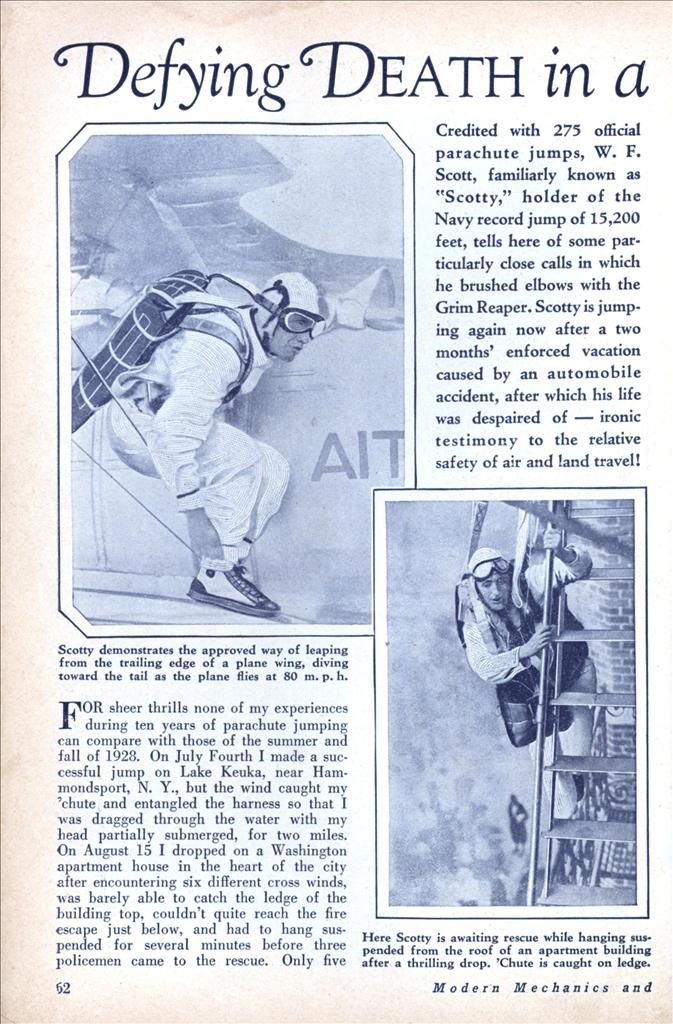 Defying Death in a Parachute

Credited with 275 official parachute jumps, W. F. Scott, familiarly known as “Scotty,” holder of the Navy record jump of 15,200 feet, tells here of some particularly close calls in which he brushed elbows with the Grim Reaper. Scotty is jumping again now after a two months’ enforced vacation caused by an automobile accident, after which his life was despaired of — ironic testimony to the relative safety of air and land travel!

by W. F. SCOTT
Champion Parachute Jumper of the Navy

FOR sheer thrills none of my experiences during ten years of parachute jumping can compare with those of the summer and fall of 1928. On July Fourth I made a successful jump on Lake Keuka, near Hammondsport, N. Y., but the wind caught my ‘chute and entangled the harness so that I was dragged through the water with my head partially submerged, for two miles. On August 15 I dropped on a Washington apartment house in the heart of the city after encountering six different cross winds, was barely able to catch the ledge of the building top, couldn’t quite reach the fire escape just below, and had to hang suspended for several minutes before three policemen came to the rescue. Only five days later I landed full tilt on a group of high tension wires of 35,000 voltage, on the edge of Boiling Field, Washington.

That July Fourth experience was a terrific battle with death. Never will I forget it, for only by a miracle am I now alive to describe it. My purpose in going to Hammondsport was not only to make an exhibition jump but to make an official test of a new type of rubber suit designed to save the lives of aviators who are forced to resort to their ‘chute over a body of water.

Now, I’m barely five feet tall, yet this suit was made for a man who measures five feet eight. However, I was sealed in the contraption, which was all in one piece, including the stockings. Sealed in is right. The front of the suit was laced up with heavy thumbscrews against rubber gaskets. Rubber bands were placed around my wrists and adhesive tape bound around my neck mighty tight. So tight, in fact, that when I jumped I thought I was going to choke when the wind struck me full force.

The plane was an O-L-8, a new amphibian. With Lieut. Harvey Bowes at the controls we sailed out, 9 miles from Ithaca, into the center of beautiful Lake Keuka, which is 5 miles wide, 22 miles long and at least a couple of miles at its deepest point. The jump from 4,000 feet was satisfactory enough, but when the ‘chute snapped open, about 1200 feet below my leap, an enormous hole ripped open along the back of the rubber suit, due, no doubt, to the shock of the wind against the heavy harness around my body.

However, everything else seemed to be all right until I hit the water. Always, of course, a jumper aims to disengage the parachute from his body as soon as he lands. This I attempted to do, but I was so badly entangled that I failed. Meanwhile the wind and water were waging a fierce struggle for supremacy over what was to be my fate, the water pouring into the gaping hole in the rubber suit, thereby tending to pull me beneath the surface, and the wind spasmodically catching hold of the ‘chute and forcing it along the water at a fast rate of speed.

Bear in mind also that the rubber suit itself weighed about 20 pounds dry, with five additional pounds of lead in the sole of each shoe, presumably for the purpose of maintaining my body in an upright position at all times while in the water.

Pretty soon the suit acted just like a giant bucket of water attached to my person, dragging my head beneath the surface every now and again. And now a sudden gust of wind caught the ‘chute, just as Captain H. C. Richardson, in charge of the test, noticed my plight and headed for me in his speed boat from a point perhaps 200 yards away. Whereupon for over two miles I was in a helpless, and apparently hopeless, situation. Inextricably entangled in the harness, which was still strapped to my body, I was hurtled, at dizzy speed, through the water, occasionally rolling over the surface, but more often with my nose exposed to a six-inch covering of water.

For perhaps half of that terrible ride I was fully conscious, able to observe almost everything that was going on, but utterly unable to help myself. Then all went blank. However, Captain Richardson told me afterwards that my face had been completely submerged for six minutes before he and his assistants were able to drag me out. Even then my face had turned blue in color. But quickly they took me to the nearest dock, offered first aid for almost an hour, shot a stomach pump into me and let me lie down for a spell. Only Captain Richardson’s rare presence of mind and speed of action saved my life, combined with the fact that the rescue party was able to locate me, thanks to the fact that the parachute and harness were able to float on the surface, thereby rendering them visible to the rescue party for hundreds of yards.

My experience of August 20, 1928, was easily the second most thrilling of a lifetime. A big movie company that makes news reels wanted to take some pictures of myself and three other Navy men jumping simultaneously from a plane over Boiling Field, Washington. The film was to be called the “race to earth,” but it might well have been termed “the race with death.” I won the pictorial race handily enough, but almost lost my life during the venture.

From a 1500 foot elevation we all jumped from a Navy Ford transport. Once my ‘chute was open and I was speeding towards the earth, 1 took careful note of a. spot on the field where I wanted to land, but a strong wind blew up suddenly and upset my plans. Imagine my horror to realize, when only a couple hundred feet from the ground, that I was likely to drop full tilt on a group of high tension wires of 35,000 voltage, near the roof of a hangar!

Unfortunately, however, it was too late for me to accomplish much towards guiding the ‘chute, so within a few seconds I found myself suspended on one of those dangerous wires like a canary on a perch. True enough, the wires were barely six feet from the ground, but since I measure only five feet from head to toe, I wasn’t any too near the ground at that particular moment. By some miracle, however, none of my body actually was touching the wires, though my ‘chute was wrapped around them, and at any moment I might make a contact that would mean my death.

Nevertheless, I somehow contrived to undo my breast strap and both leg straps, but while so doing, my right toe barely touched a section of the wire, with the result that a great wall of flame shot out, badly scorching several shroud lines on the ‘chute. But I scrambled quickly to the ground and asked an attendant at the field to have the power shut off. This he did immediately, so that I was able to recover my ‘chute without further damage to it.

Talk about a strong wind blowing you all over the heavens! I’ll wager I’ll always remember the events of August 15, 1928, when I was fortunate enough to set a new Navy altitude record of 15,200 feet.

My pilot, Lieut. Ernest W. Litch of the Naval Air Station near Washington, took me up in a Vought Corsair biplane for what I hoped would be a record jump for all Navy parachute men. When we reached 15,200 feet I signalled Litch that I was ready and then, when he had slowed down to the customary jumping speed of 80 miles an hour, I poised for a brief moment to visualize the scene below. The capital city looked like a tiny park from the great height of 3 miles.

For this particular jump I took the precaution of wearing two parachutes, one of the regulation seat type and the other of the back type for emergency use. However, the first one opened up satisfactorily enough. \et I soon found myself well nigh helpless before a strong north wind which carried me well over the city. I was like a cork bobbing about in a strong sea, for no sooner did I find myself down to an elevation of 5,000 feet, than a south wind caught me and started swinging the ‘chute back towards the Potomac River from whence I had come.

Now, the average parachute jump takes only from 30 seconds to one minute, so one can well imagine how I felt when, after being aloft 15 minutes, I began to realize that I would be lucky to even make a safe landing, let alone a good one. All the while, of course, as I neared the earth I kept looking about for a possible landing place. Two hundred yards or so from the ground, in one of the most crowded sections of the city, I was forced to conclude that my best bet was to try to land on a nearby apartment house. I was unable to make the roof, however, but skimmed over it, my feet catching in a radio aerial.

Fortunately for me, the ‘chute caught on the ledge at the top. But I couldn’t quite reach down far enough to catch the fire escape six feet below, so I just hung there. Meanwhile hundreds of people were watching me from the ground, and to add a bit of humor to my hazardous situation, an excited woman threw open a window in an apartment nearby, and while I swung like a pendulum with each new movement of the wind, she entreated me if I wanted a glass of water.

I assured the good lady that I did not, and while so doing three policemen came to my rescue, raised a ladder to the roof, and I managed to clamber down the fire-escape to safety.

How does it feel to make a jump? Well, there’s a new kind of thrill most every time, depending largely on how the winds and currents are behaving. But generally the first sensation is of a rushing wind and a terrific descent. Then, after you pull the rip-cord you get something of a jolt as the ‘chute opens. After that it’s all pretty much plain sailing until you hit the ground, granted that you know how to guide your giant parasol.

This is entirely a matter of proper manipulation of the shroud lines, whereby you are able to pull the side of the ‘chute in the direction you want to slip, assuming that the wind is not blowing particularly hard. In thus maneuvering your shroud lines you also are able to increase your rate of descent since a parachute works on the principle of a column of air massed directly underneath the lifeboat of the air.

Different jumpers have their own individual methods of leaping from a plane, but I believe that it is possible to make this generalization: if you are in an open cockpit plane, then stand where the trailing edge of the lower wing fastens on to the fuselage, forming a V,’ and dive towards the tail, fall as far as you desire, and then release the ‘chute. On the other hand, if you are in a cabin type of closed plane, you simply dive straight forward out the door.