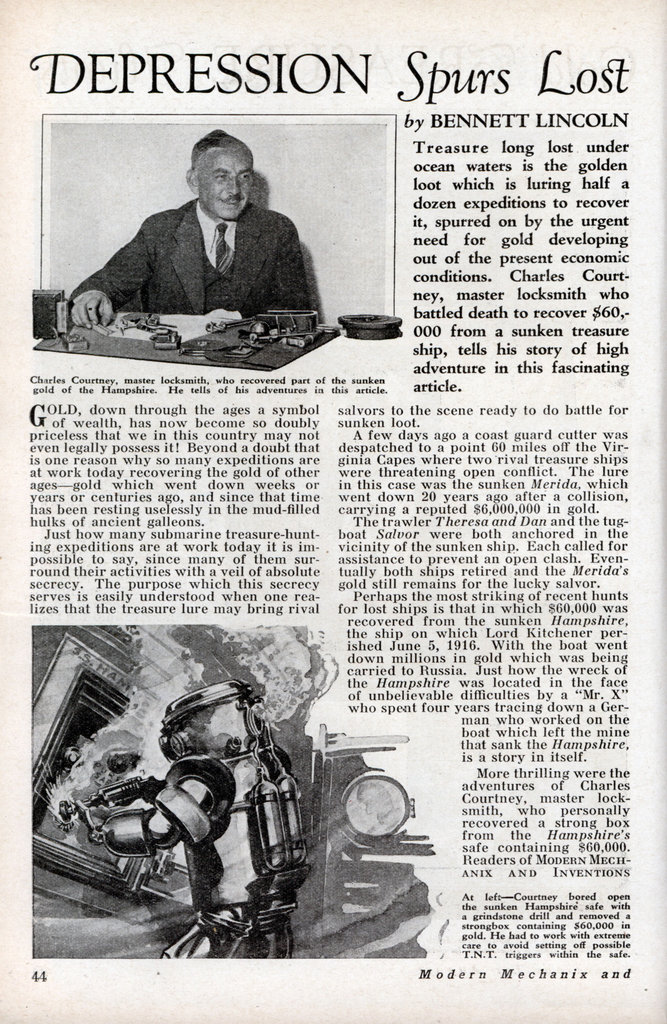 Treasure long lost under ocean waters is the golden loot which is luring half a dozen expeditions to recover it, spurred on by the urgent need for gold developing out of the present economic conditions. Charles Courtney, master locksmith who battled death to recover $60,000 from a sunken treasure ship, tells his story of high adventure in this fascinating article.

GOLD, down through the ages a symbol of wealth, has now become so doubly priceless that we in this country may not even legally possess it! Beyond a doubt that is one reason why so many expeditions are at work today recovering the gold of other agesâ€”gold which went down weeks or years or centuries ago, and since that time has been resting uselessly in the mud-filled hulks of ancient galleons.

Just how many submarine treasure-hunting expeditions are at work today it is impossible to say, since many of them surround their activities with a veil of absolute secrecy. The purpose which this secrecy serves is easily understood when one realizes that the treasure lure may bring rival salvors to the scene ready to do battle for sunken loot.

A few days ago a coast guard cutter was despatched to a point 60 miles off the Virginia Gapes where two rival treasure ships were threatening open conflict. The lure in this case was the sunken Merida, which went down 20 years ago after a collision, carrying a reputed $6,000,000 in gold.

The trawler Theresa and Dan and the tugboat Salvor were both anchored in the vicinity of the sunken ship. Each called for assistance to prevent an open clash. Eventually both ships retired and the Merida’s gold still remains for the lucky salvor.

Perhaps the most striking of recent hunts for lost ships is that in which $60,000 was recovered from the sunken Hampshire, the ship on which Lord Kitchener perished June 5, 1916. With the boat went down millions in gold which was being carried to Russia. Just how the wreck of the Hampshire was located in the face of unbelievable difficulties by a “Mr. X” who spent four years tracing down a German who worked on the boat which left the mine that sank the Hampshire, is a story in itself.

More thrilling were the adventures of Charles Courtney, master locksmith, who personally recovered a strong box from the Hampshire’s safe containing $60,000. Readers of Modern Mechanix and Inventions will remember Mr. Courtney’s own story of his methods of opening the safe on the sunken Egypt in an eminently successful salvage venture which up to date has recovered $3,250,000.

Mr. Courtney is president of the American Association of Master Locksmiths, and so widespread is his fame that when a man was needed to unlock the safes of the Hampshire, Mr. X came from the other side of the sea to seek his services. Courtney accepted the commission, veiled in secrecy, little knowing that before he had completed his contract he would very nearly have paid with his life, and that he would carry a shattered wrist and hair prematurely whitened by terror as a permanent reminder of a disastrous bout with death.

Sitting in his New York office, the master locksmith told me the terrifying story of his experiences for readers of this magazine. He told me of being taken aboard the salvage ship, of a zig-zag course taken to the treasure site to elude possible pursuers, of the location of the wreckâ€”and finally of his own part in the drama.

“Right after the ship was identified, I started my diving work. I went down and with the use of a grindstone drill succeeded in boring open a built-in safe in the ship. That was a mighty difficult job, cracking that safe. I had to guard against T-N-T triggers or other safeguards which its makers might have secreted in it. I blew it open without mishap, however, and withdrew from it a strong box which I later discovered contained about $60,000 in gold.

“I went down once again after recovering that strong box with the $60,000. You see there was no possible way of opening those safes without my presence down there. It was impossible to calculate the nature of the tumblers because of the havoc of time. The only method we could employ was to locate the safes and figure out the best and most harmless way of blasting them open, and still regain the treasures they held.

“By April 24 there had already been a great deal of blasting work. This was the day when we were to reap our hard-fought for harvest. There was $10,000,000 lying there waiting for us to bring it back to civilization.

“Down we went, Costello, Samuel Mansfield, an adventurous youth from Virginia, and myself. We were in our aluminum suits. We had the customary equipment and auxiliary devices. We used our telephones constantly, keeping in communication with the engineers on deck of the salvage boat. As my two companions and myself were let down on the second descent the first 100-foot drop was without a hitch. At 200 feet I was suddenly seized with misgivings. Something was wrong.

“I was cut off from communication with my other two comrades. Fear of darkness overcame meâ€”darkness as smothering, as all-enveloping as the inside of a coffin.

“‘Bring us up quick! We’ve been struck by an undertow!'” I yelled desperately.

“But no response. No signal or other token that those on the surface got my SOS. Having had experience as a diver I tried to be calm. I figured, or tried to figure as calmly as I could, that those above were waiting for the current to ease. I could not budge the cables. The electricity was cut off so that there could not be a short circuit.

“In another moment I was seized with a terrifying sensation. As I dangled there helplessly, hoping and praying for rescue, my suit was cut in the right side. I was flung violently against the side of the Hampshire. I was sure I would be dead in a matter of moments. I was down under pressure of 400 pounds to the square inch. My breathing became more difficult.”

In these waters of black menace, more horrible than any of Poe’s tombs of living death, Courtney struggled for a half hour that seemed a monthâ€” tugging frantically at his signal cable, getting no response, losing blood from the frightful gash in his side and suffering excruciating pain from his shattered wrist. Minutes dragged past, each heavy with the conviction that the next moment would bring a rush of death-dealing watersâ€”and then the cables stirred. Forces of the current were bested at last, and Courtney was lifted to the surface.

“Several hours later I happened to be looking in a mirror, for curiosity rather than for vanity. To my amazement I discovered that my hair had turned almost white from the frightful experience I had in Neptune’s chamber. But I’m happy to say it was just another set of mixed tumblers locking a vault out of which I was very lucky to escape. When I returned to the tranquil routine of my West 125th St. shop during the latter part of last May, I had 12 stitches in my side and my wrist was encased in a plaster cast.”

After that catastrophe, work of salvaging the Hampshire was postponed until late summer. It is rumored that the British government is negotiating to buy up the rights of Mr. X and his co-workers.

Interest in salvaging operations is world wide. Efforts are being made to obtain the $5,000,000 which went down with the English frigate Lutine which sank off the mouth of the Zuyder Zee in 1799. Still others are trying to get back $10,000,000 in Spanish gold which sank with the frigate De Braak off the Delaware Capes in 1798.

There are several other similar expeditions. Some of them are working secretly. Only recently a specially-equipped submarine steamed out of New York harbor on a salvage mission. No one knows the mysterious craft’s personnel, no one knows her destination.

No one knows with any authority exactly how many treasure ships lie in unmarked graves. Only recently Allan C. Robertson, searching through dingy old records, came across accounts of the sinking of the De Braak in colonial days, carrying a reputed $40,000,000 in goldâ€”under only 70 feet of water. One of the illustrations with this article shows the recovery methods he is pursuing in seeking this fabulous treasure.

One of the most remarkable of the new treasure salvaging devices is the diving suit shown on page 46, developed by J. S. Peress, of Byfleet, England. It is extraordinarily strong,, enabling descents to 1200 feet, a previously unheard of depth. The diver carries his own air supply on his back, eliminating pumping lines. Despite its size, the suit is very flexible under water, the joints moving in an oil cushion. Pincer-like claws at the end of each arm function like fingers. The depths at which the new suit can operate brings such treasure ships as the Lusitania, lying in 700 ft. water, within range of diving operations.