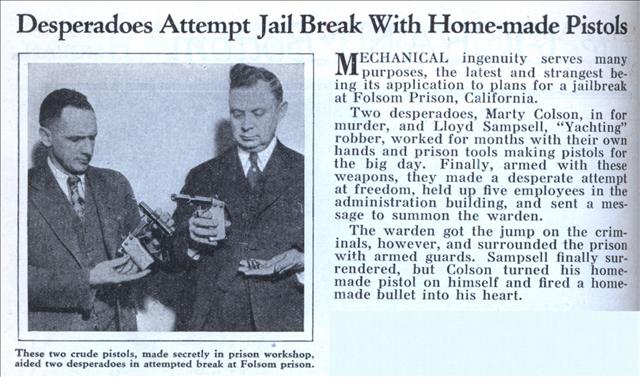 MECHANICAL ingenuity serves many purposes, the latest and strangest being its application to plans for a jailbreak at Folsom Prison, California.

Two desperadoes, Marty Colson, in for murder, and Lloyd Sampsell, “Yachting” robber, worked for months with their own hands and prison tools making pistols for the big day. Finally, armed with these weapons, they made a desperate attempt at freedom, held up five employees in the administration building, and sent a message to summon the warden.

The warden got the jump on the criminals, however, and surrounded the prison with armed guards. Sampsell finally surrendered, but Colson turned his homemade pistol on himself and fired a homemade bullet into his heart.