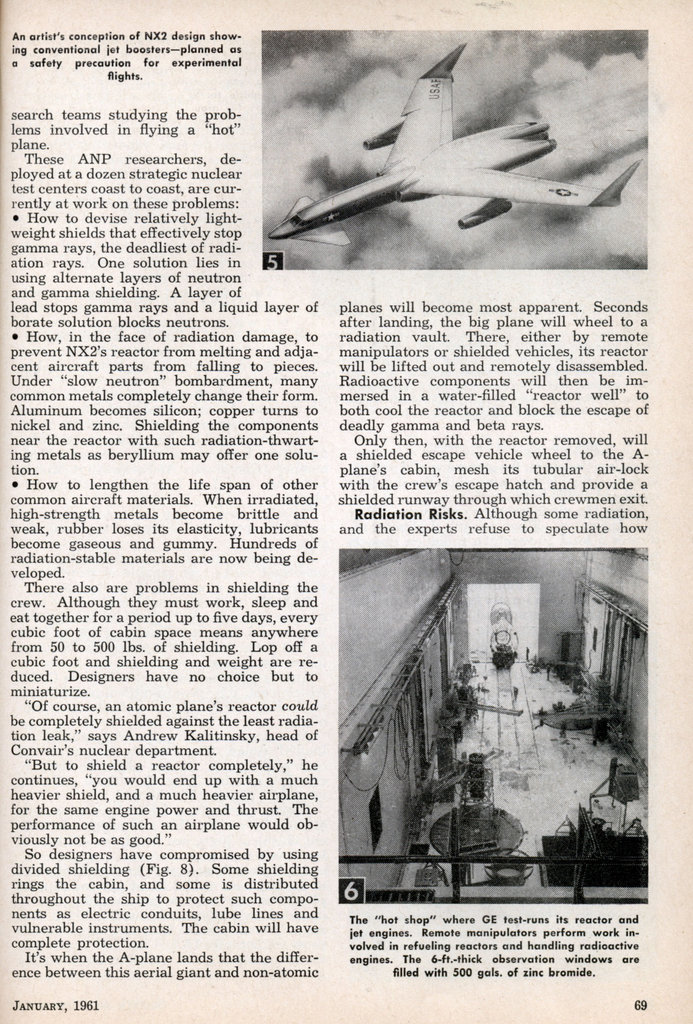 What will take to the air sometime in 1964 aver sparsely populated western terrain and along 50-mile-wide “radiation corridors” promises some surprises for old-hand plane watchers.

America’s “hottest” bomber, big as a B-52, will have swept back wings and non-orthodox tail control surfaces. Although the NX2’s vital statistics are still shrouded in secrecy, the ship soon to be constructed at Convair’s plant in Fort Worth, Texas, will measure some 180 ft. from nose to tail and have a wingspan of about 150 ft. Its wings will carry no engines except for two conventional jet boosters planned for experimental flights only (Fig. 5). Thus the plane will have thinner and broader wings than the B-52 to balance its tail-heavy reactor and radiation shielding. Control surfaces on the vertical and horizontal stabilizers will be smaller than for jet planes of comparable size. This is because the plane’s center of gravity won’t shift as it does on jet planes as they consume fuel. One pound of fuel probably will carry the NX2 about 14,000 miles and keep it aloft for 24 hours or more.

Reactor Is Heart. A shielded, spherical reactor, heart of the NX2, will contain uranium 235 or plutonium 239, both easily fissionable materials, as fuel. The reactor and there’s a possibility that there may be two of them acts as the source of the heated air that provides thrust.

A single gram (or about 0.035 lbs.) of reactor fuel generates about 1 million watts during a day’s fissioning and boosts the reactor’s temperature well
above 1,200 F.

Capt. Thomas L. Jackson, an Air Force nuclear technologist, has estimated that to power a nuclear bomber at near the speed of sound and to altitudes of 35,000 ft, a reactor must supply “in the neighborhood of 300 mgw.”

While this figures out to about 0.65 lbs. of atomic fuel a day, actually the “fast” reactor under development for NX2 is said to be far more efficient. A dwarf compared to ordinary power reactors, it nevertheless squeezes far greater power from a gram of reactor fuel.

In the absence of control rods, fission is regulated by moving the fuel elements or reflector segments in the reactor’s core to increase or decrease the number of neutrons and thus the rate of fission. One nuclear technician suggests that NX2’s fast reactor may be controlled by a rotatable drum, coated on one side with boron, an element that captures neutrons. Controlled from the cabin, the drum’s boron side can be rotated to absorb neutrons and thus slow or stop the fission process.

Pratt & Whitney’s indirect cycle system taps reactor heat indirectly through a closed loop that circulates liquid metal from the reactor’s core to heat exchangers where compressed air is heated and turned into thrust.

Direct cycle advocates claim the system is the simplest, most reliable and easiest to maintain.

Other nuclear engineers are not so convinced.

“The direct system’s inherent limitations rule it out as a really high-performance supersonic power plant,” says one engineer. These limitations stem from the fact that air, being a poor conductor of heat, can seldom tap a reactor’s full potential. If it can, the reactor must be big enough to present a large heat transfer area to the airstream. Jet engine air also runs the risk of nuclear contamination through contact with reactor fuels. The indirect cycle system has several advantages. Liquid metal, the most efficient heat conductor known, can remove essentially all the heat from even the smallest, most compact reactor. Unlike a direct cycle system, the reactor and its fuel elements can be isolated against oxidation. Jetstream contamination is virtually impossible.

But there are some disadvantages. The indirect system involves a complex of piping and plumbing, including liquid-metal circulating pumps operated by engine air, that sap some of the turbojet’s thrust. Piping is prone to leaks, and a reactor left uncooled can explode. Remote plumbing requires shielding not necessary in the direct cycle system.

However, both systems pose one of the thorniest problems to confront designers of advanced aircraft reactors (the only type that can generate enough power to propel planes at supersonic speeds): where to find materials that can withstand the tremendous reactor temperatures in the 3,000 FÂ° range.

A mixture of heat-resisting ceramics and reactor metals called cermets may help solve the problem, say some engineers. Among the refractory cermets now being developed for aircraft fast reactors are beryllium oxide, beryllium carbide and graphite compounds.

These ANP researchers, deployed at a dozen strategic nuclear test centers coast to coast, are currently at work on these problems:

â€¢ How to devise relatively lightweight shields that effectively stop gamma rays, the deadliest of radiation rays. One solution lies in using alternate layers of neutron and gamma shielding. A layer of lead stops gamma rays and a liquid layer of borate solution blocks neutrons.

â€¢ How, in the face of radiation damage, to prevent NX2’s reactor from melting and adjacent aircraft parts from falling to pieces. Under “slow neutron” bombardment, many common metals completely change their form. Aluminum becomes silicon; copper turns to nickel and zinc. Shielding the components near the reactor with such radiation-thwarting metals as beryllium may offer one solution.

â€¢ How to lengthen the life span of other common aircraft materials. When irradiated, high-strength metals become brittle and weak, rubber loses its elasticity, lubricants become gaseous and gummy. Hundreds of radiation-stable materials are now being developed.

There also are problems in shielding the crew. Although they must work, sleep and eat together for a period up to five days, every cubic foot of cabin space means anywhere from 50 to 500 lbs. of shielding. Lop off a cubic foot and shielding and weight are reduced. Designers have no choice but to miniaturize.

“Of course, an atomic plane’s reactor could be completely shielded against the least radiation leak,” says Andrew Kalitinsky, head of Convair’s nuclear department.

“But to shield a reactor completely,” he continues, “you would end up with a much heavier shield, and a much heavier airplane, for the same engine power and thrust. The performance of such an airplane would obviously not be as good.”

So designers have compromised by using divided shielding (Fig. 8). Some shielding rings the cabin, and some is distributed throughout the ship to protect such components as electric conduits, lube lines and vulnerable instruments. The cabin will have complete protection.

It’s when the A-plane lands that the difference between this aerial giant and non-atomic planes will become most apparent. Seconds after landing, the big plane will wheel to a radiation vault. There, either by remote manipulators or shielded vehicles, its reactor will be lifted out and remotely disassembled. Radioactive components will then be immersed in a water-filled “reactor well” to both cool the reactor and block the escape of deadly gamma and beta rays.

Only then, with the reactor removed, will a shielded escape vehicle wheel to the A-plane’s cabin, mesh its tubular air-lock with the crew’s escape hatch and provide a shielded runway through which crewmen exit.

Radiation Risks. Although some radiation, and the experts refuse to speculate how much, may leak from the less-than-maximum shielding, people on the ground would experience a negligible exposure while the ship flies overhead at 400 to 600 mph.

Inside the plane, crewmen will wear radiation dosimeters. When a man’s dosimeter indicates a total 30-roentgen radiation dosage, he will be scratched from flying A-planes. Thus, unless every precaution is taken, a crew is no more trained than they are up to their radiation limit and must be pulled from the flight roster and grounded.

Two of these situations concern weather conditions. On a sunny, breezy day, fission products will quickly disperse with relatively little danger. But in bad weather, when dispersion is poor, more concentrated contamination would likely occur over a greater area.

Two other possible situations concern reactor crash damage. Meltdown could occur when the reactor’s core melts because of coolant system failure. This may not necessarily be serious as long as the reactor shielding remains intact. Runaway could happen if control failure permits the reactor to speed up until its fiery heat vaporizes the core. This could be serious because vaporizing releases more fission products than melting.

Weighing these variables – reactor damage and weather – the experts have arrived at an appraisal of crash danger:

Farther than one mile from crash site: no radiation high enough to cause even temporary sickness.

Yet under the most adverse conditions, such as a reactor runaway during bad weather, persons in a narrow belt as far as 35 miles downwind may receive “maximum permissible exposure,” a non-damaging dosage, but nonetheless an appreciable exposure.

Strategic Design. The NX2’s design speed of a subsonic 500 to 600 mph and its modest ceiling of about 40,000 ft. reveals, far more than does its odd configuration, its strategic mission as a CAMAL bomber (Continuous Airborne Alert Missile Launcher and Low-Level Penetration Airplane).

“Missiles have wrung the premium out of a plane’s speed and altitude,” says one designer.

CAMAL A-planes would maintain a continuous airborne alert. Ordered into action, they would drop to altitudes of 500 to 1,000 ft., but suffer none of the power loss common to low-flying jets.

Atomic-powered bombers will fit the CAMAL concept; they require no vulnerable midair fueling and could stay aloft almost indefinitely.

An atomic-powered plane has a nearly unlimited range. The limiting factor is the crew’s ability to remain aloft for days in cramped quarters (Fig. 7) without suffering mental or physical breakdown.

Reactor-jet engines, fueled by superheated air, not by combustible and oxygen-dependent chemical fuels, are nearly as efficient at low levels as at high.

An A-plane’s range isn’t limited by the size of the payload. Add 1 lb. of payload to a jet plane and you increase gross weight (mostly in added fuel) anywhere from 3 to 10 lbs. The same pound would increase an A-plane’s gross weight only 1.5 to 4 lbs. and this mostly in strengthening its airframe and landing gear, and increasing reactor size slightly.