Device Awakens Sleeper With Water In The Face (Sep, 1938)

I had a similar device that would pour water on me when I refused to get up for school. I called her Mom. 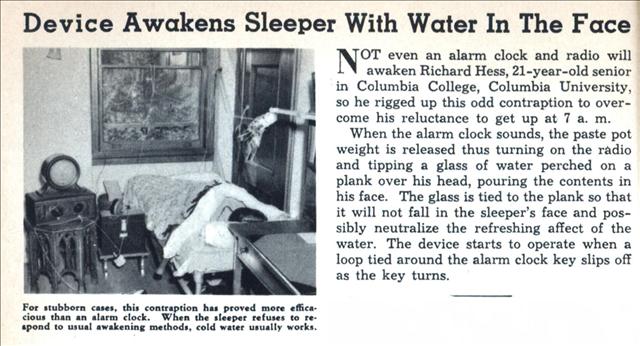 Device Awakens Sleeper With Water In The Face

NOT even an alarm clock and radio will awaken Richard Hess, 21-year-old senior in Columbia College, Columbia University, so he rigged up this odd contraption to overcome his reluctance to get up at 7 a. m.

When the alarm clock sounds, the paste pot weight is released thus turning on the radio and tipping a glass of water perched on a plank over his head, pouring the contents in his face. The glass is tied to the plank so that it will not fall in the sleeper’s face and possibly neutralize the refreshing affect of the water. The device starts to operate when a loop tied around the alarm clock key slips off as the key turns.