Is there any way this could possibly have worked? It seems like way too subtle a problem to solve just by matching certain frequencies. I’m sure you could program a computer to do a pretty good job of this now, but even that would have problems. And even if it worked, who’s to say a commercial can’t have music? 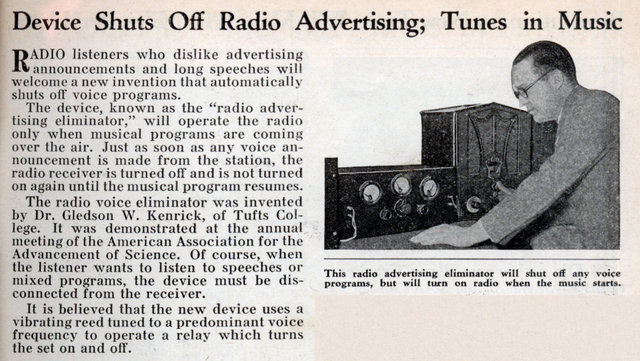 RADIO listeners who dislike advertising announcements and long speeches will welcome a new invention that automatically shuts off voice programs.

The device, known as the “radio advertising eliminator,” will operate the radio only when musical programs are coming over the air. Just as soon as any voice announcement is made from the station, the radio receiver is turned off and is not turned on again until the musical program resumes.

The radio voice eliminator was invented by Dr. Gledson W. Kenrick, of Tufts College. It was demonstrated at the annual meeting of the American Association for the Advancement of Science. Of course, when the listener wants to listen to speeches or mixed programs, the device must be disconnected from the receiver.

It is believed that the new device uses a vibrating reed tuned to a predominant voice frequency to operate a relay which turns the set on and off.