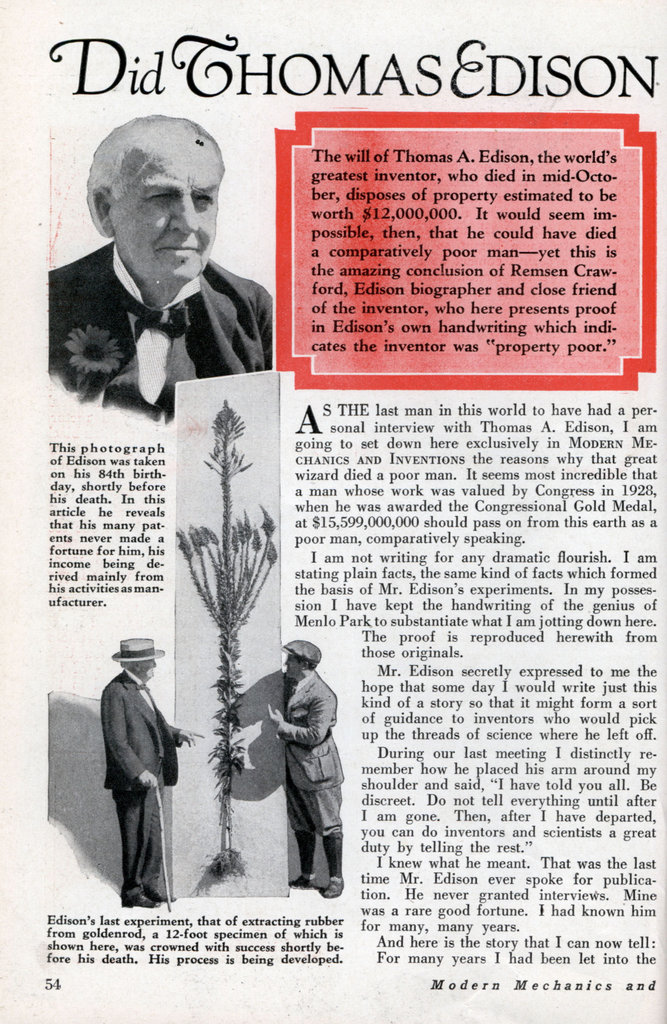 AS THE last man in this world to have had a personal interview with Thomas A. Edison, I am going to set down here exclusively in Modern Mechanics and Inventions the reasons why that great wizard died a poor man. It seems most incredible that a man whose work was valued by Congress in 1928, when he was awarded the Congressional Gold Medal, at $15,599,000,000 should pass on from this earth as a poor man, comparatively speaking.

I am not writing for any dramatic flourish. I am stating plain facts, the same kind of facts which formed the basis of Mr. Edison’s experiments. In my possession I have kept the handwriting of the genius of Menlo Park to substantiate what I am jotting down here.

The proof is reproduced herewith from those originals.

Mr. Edison secretly expressed to me the hope that some day I would write just this kind of a story so that it might form a sort of guidance to inventors who would pick up the threads of science where he left off.

During our last meeting I distinctly remember how he placed his arm around my shoulder and said, “I have told you all. Be discreet. Do not tell everything until after I am gone. Then, after I have departed, you can do inventors and scientists a great duty by telling the rest.”

I knew what he meant. That was the last time Mr. Edison ever spoke for publication. He never granted interviews. Mine was a rare good fortune. I had known him for many, many years.

And here is the story that I can now tell: For many years I had been let into the secret that Thomas Edison was not enriching himself by his wondrous inventions. Some day he would die a relatively poor man. The pay-check of genius unhappily is seldom commensurate with service to humanity. Trite the tale, but in Mr. Edison’s case it had always seemed to me like a deplorable, tragic calamity. This man should have been the Croesus of the modern world if rewarded in rightful ratio to the uses mankind had made of his incomparable wisdom.

Some months prior to his death, when a controversy arose over the question, “What did Edison ever really do for the making of moving pictures, etc?” and I saw an undercurrent of challenge to his greatness, I sought an interview: My acquaintance with Mr. Edison had until then never been more than what a newspaper reporter sometimes develops with a celebrity in the day’s work of chronicling the news. But thirty years ago, when I first went to interview him, he put aside his drafting board, and with it, all reserve and answered my questions about the expiration of some of his patents with such frankness and cordiality that a bond of sympathy arose between us.

Sitting there in his laboratory in West Orange, N. J., at nearly midnight on a Saturday night, clad in a shabby old linen duster and with a big floppy old straw hat pulled down over his eyes, the world’s greatest inventor told me that he had never had exclusive use of any of his great inventions.

He related to me that while a government is supposed to protect a patent for seventeen years, the expiration of a patent means but little to an inventor because in the case of an epoch-making invention, nine times out of ten somebody has bobbed up and challenged the real inventor’s right to his patent, and the real inventor always gets the worst of it in court, even though he may hold in his hand the patent of the United States Government.

“Take that little incandescent lamp hanging over my head, for instance,” declared Mr. Edison in that interview years ago and which I am now releasing in its entirety for the first time. “I fought for that in the courts of this country fourteen years, and my associates and I spent $1,000,000 trying to establish my claims to it which had been vouched by the Patent Office.

“At the expiration of the fourteen years there were but three years left for the patent to live.

“Thus, my opponents were able to keep me out of the profits of that particular patent until the rights to it were well-nigh useless.

“I am not saying this in a mood of complaint, for I can make money, anyhow. But it is a miserable system we have in this country that menaces a poor man starting out to invent something. I know of several inventors who are poor. Their ideas would have made them millionaires. But they were kept poor by the pirates who were allowed to usurp their rights in courts.

“The usurpation is particularly apt to result in the case of some extraordinary patent. I could invent a new monkey wrench which might go without infringement, but the moment I take certain forces and work out a moving picture for the first time in the history of the world, like that produced by the kinetoscope, mark you how the pirates rise up and call it their own.

“The seven patents expiring at midnight tonight are not fundamental patents. They were improvements rather than originations. The monopoly of their use will not be destroyed for the reason that there is no such thing in this country as the monopoly of any inventor’s creation.

“We have never had a monopoly of anything I have ever invented.”

With this old interview in my mind, I wondered how Mr. Edison had been faring all these years with “the pirates” whom he had so vividly, so forcefully depicted to me long before.

On my last visit to Mr. Edison not so long ago, I found him in his laboratory peering through a queer new camera. He chuckled good-humoredly as he hailed me with this: “Yes, we’ll take up where we left off thirty years ago, and we’ll complete the interview about the fellows I call ‘pirates’. Maybe it will help those young inventors who are coming after me.”

He spoke very frankly to me about his financial status when I asked him if he would take me into his confidence and tell me why he was not the richest man in the world.

Here is the first question I typed out for Mr. Edison, for this was the form our interview took: “In our interview Friday you answered one of my questions by saying that you had never made much money from your inventions and patents but your earnings had come from manufacturing and selling your products.

“You went further and said that you believe you have spent more defending your patents in court than you had ever derived from them on a royalty basis, excepting perhaps the moving picture rights. This is by far the outstanding point in this interview, since Henry Ford has corroborated these facts about you.

“Now, I would like for you to enlarge upon this. I have always thought you were never duly paid in money commensurate with your great service to the world. Millionaires have sprung up like mushrooms on your inventions, when to any normal mind it would appear that you should have been enriched more than you have been.

“How great is your fortune?

“What is your total annual income, roughly estimated?

“I don’t want to pry into your business, but what you have already said makes this the big point in this interview. Please go as far as you can on this.”

To which Mr. Edison replied, in his own handwriting: “Would not like to do this for many reasons. At present my income has nearly disappeared on account of the depression in business.”

There you have itâ€”the last statement Edison made concerning the profits made from his inventions.