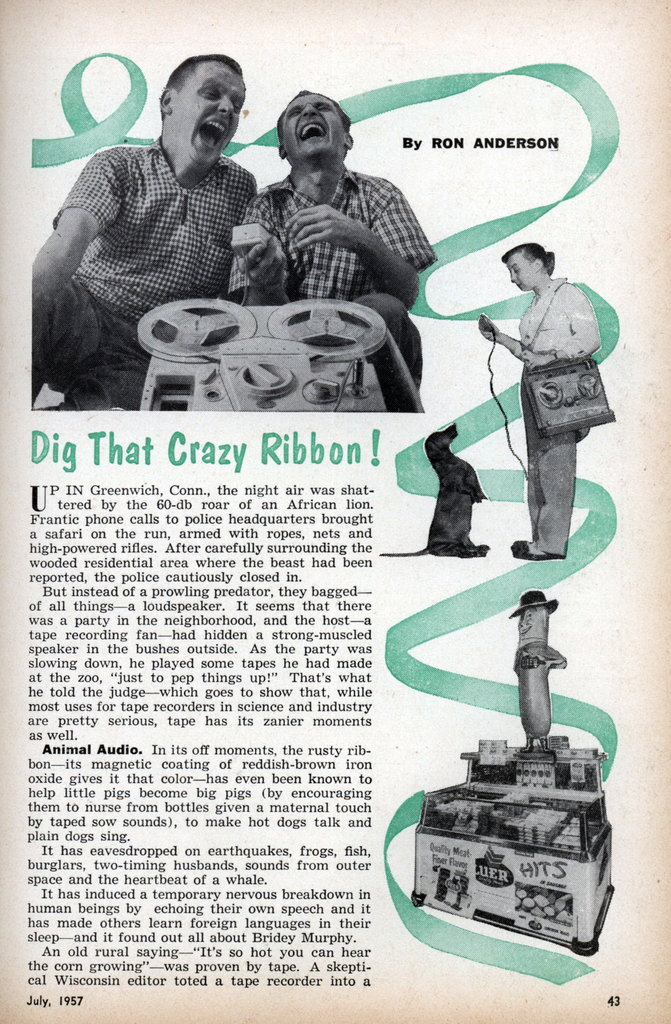 UP IN Greenwich, Conn., the night air was shattered by the 60-db roar of an African lion. Frantic phone calls to police headquarters brought a safari on the run, armed with ropes, nets and high-powered rifles. After carefully surrounding the wooded residential area where the beast had been reported, the police cautiously closed in.

But instead of a prowling predator, they bagged â€”of all thingsâ€”a loudspeaker. It seems that there was a party in the neighborhood, and the hostâ€”a tape recording fanâ€”had hidden a strong-muscled speaker in the bushes outside. As the party was slowing down, he played some tapes he had made at the zoo, “just to pep things up!” That’s what he told the judgeâ€”which goes to show that, while most uses for tape recorders in science and industry are pretty serious, tape has its zanier moments as well.

Animal Audio. In its off moments, the rusty ribbonâ€”its magnetic coating of reddish-brown iron oxide gives it that colorâ€”has even been known to help little pigs become big pigs (by encouraging them to nurse from bottles given a maternal touch by taped sow sounds), to make hot dogs talk and plain dogs sing.

It has eavesdropped on earthquakes, frogs, fish, burglars, two-timing husbands, sounds from outer space and the heartbeat of a whale.

It has induced a temporary nervous breakdown in human beings by echoing their own speech and it has made others learn foreign languages in their sleepâ€”and it found out all about Bridey Murphy.

An old rural sayingâ€””It’s so hot you can hear the corn growing”â€”was proven by tape. A skeptical Wisconsin editor toted a tape recorder into a corn field on a still night and turned it on. The result ? A tapeful of snap, crackle and popâ€”typical corn-growing soundsâ€”hot off the cob.

Articulate Sausage. Talking hot dogs, barking in plain English, have tape vocal cords. Their electronic pedigree relates their breed to any number of inanimate objects, including talking refrigerators, elevators, gasoline pumps and Uncle Sam’s mail boxes. As the unwary customer approaches the hot dogâ€”or what have youâ€” the gadget accosts him with pre-recorded jingles. It stimulates salesâ€”so they say.

But talking dogs evidently are not enough to satisfy this wonderful age of science. A Dane named Carl Weismann” chases dogs with a tape recorder to capture the haunting music of their howls. With his portable machine he toured the alleys and gutters of Copenhagen luring stray mongrels of all kinds to bark into his microphone. From this varied canine chorus he then snipped the taped barks into individual woofs, classified each on the musical scale from soprano to bass and put them all back together again in such sequence that they came out Jingle Bells when the patched-up tape was played.

And if you think this sounds completely silly, you are quite right. But consider that a record firm put it on a disc that sold half a million copiesâ€””confounding man and beast” as Life magazine reported. Whatever it is, this proves somethingâ€”possibly that the bark of a dog is worse than his bite.

Frog Courtship. Tape recordings also figured in a project reminiscent of the late Dr. Kinsey when a University of Texas biologist headed for the swamps to survey the sexual behavior of toads and frogs. By taping the mating calls of various species, he discovered why some frogs lead a loveless life. That, incidentally, was not his purpose. The captured croaks are expected to contribute to knowledge of heredity factors in humans.

While we’re on the subject of sex, there’s the story about the ex-GI, allegedly from Newcastle, Pa., who corresponded via tape recordings with a Fraulein by name of Bertha Kohlz whom he had met on occupation duty in Germany. After two years of talking on tape, their hi-fi courtship warmed to the point where he married her and brought her to the United States. As far as is known, this is the only tape recorder to have a hand in carrying Kohlz to Newcastle.

Spell on Reels. The man who really started the tape reels rolling was a guy who wanted to be in two places at onceâ€” Bing Crosby. Back in 1948, with a yen for the easy life, Crosby took a dim view of spending his dinner hour in the studio so that the network’s eastern listeners could hear his radio show “live” at a respectable hour.

Recordings were the only answer, but in those days producers paled at the mention of a canned show. They felt that the crooner’s magic spell would defy confinement into grooves. Yet Crosby was insistent, so a few shows were disc-recorded in advance. As predicted, the shows lost their sparkle on wax. Editing and cuttingâ€” which could add snap to a slow showâ€”was impossible on discs.

Then Crosby ran across the Ampex Corporation which had “liberated” the Magnetophon, the first tape recorder secretly developed in wartime Germany. With this machine and the Scotch tape people’s amazing new oxide-coated tape, “live” quality was a cinch. And to top it off, the rusty ribbon could be sliced and spliced like movie film. Editing became a snapâ€”you might even say a “snip”â€”with nothing more than a pair of scissors and some sticky tape.

The result was that Crosby and his crew took a new lease on their Hooper rating and enjoyed dinner at home while a taped show “stood in” at the studio.

Tape Tax Tricks. Crosby’s experience broke the sound barrier in radio. Soon “Duffy’s Tavern” made history by taking shape on tape in the easygoing comfort of a Caribbean isle, where the cast basked contentedly in the sun. By taking their tape recorder abroad, they also managed to “erase” the income tax from their pay checks.

The famed sister team of Maro and Anahid Agemian, two outstanding musicians who appear in concert halls over the country, rehearse their piano and violin duets regularly, though they live thousands of miles apart. One sister, living on the west coast, tapes her piano part and sends the tape to the other sister, living on the east coast. She, in turn, plays the tape and practices right along on her violin.

While tape has given stars of both radio and television this super stand-in, it has also bequeathed dual personalities to lesser lights. Politicians discovered a legal way of stuffing extra votes into the ballot boxâ€” campaigning in several places simultaneously through recorded tape. While multiplying votes in this way, they complain that the tape won’t shake hands, lead parades, and kiss babies.

Pastorless churches now have tape services. Though many congregations seem willing to listen to sermons from a machine, some theologians object to tape-recorded prayers. Arguing that it is the sincerity of prayer that counts and not the mere sound of the words, they figure that hi-fiâ€”though it speak with the tongue of angelsâ€”is but sounding brass.

Travelers carrying lightweight battery-powered tape recorders can now bring back audio panoramas from their journeys, livening up their photographs and movies with the music, street sounds, and speech of the countries they have visited. One Minneapolis family took a tape recorder to Russia to record the highlights of the trip. The police returned the compliment by “bugging” their hotel room with microphones to record them. This, evidently, was one of rare instances where the communists considered turn-about fair play.

In this random roundup of the odds and ends in tape recording, the accent is on the “odds.” We therefore shan’t go into the many sobersided uses of tape in science and communications. Tape today is the mirror and sounding board for the varied noises of the world. But like trick mirrors at a carnival, tape, too, reflects human folly.