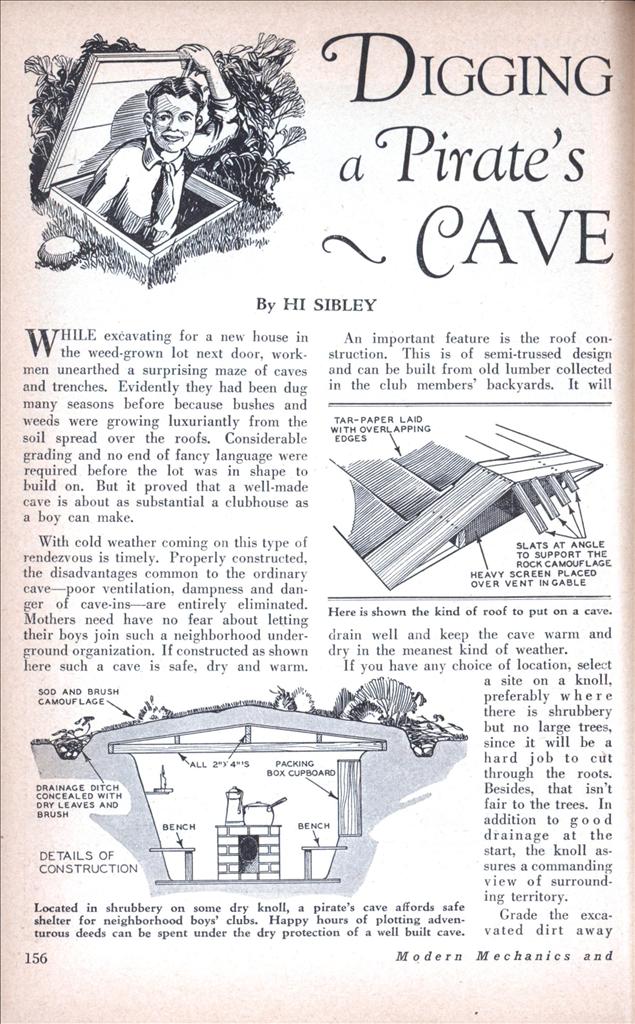 WHILE excavating for a new house in the weed-grown lot next door, workmen unearthed a surprising maze of caves and trenches. Evidently they had been dug many seasons before because bushes and weeds were growing luxuriantly from the soil spread over the roofs. Considerable grading and no end of fancy language were required before the lot was in shape to build on. But it proved that a well-made cave is about as substantial a clubhouse as a boy can make.

With cold weather coming on this type of rendezvous is timely. Properly constructed, the disadvantages common to the ordinary-cave—poor ventilation, dampness and danger of cave-ins—are entirely eliminated. Mothers need have no fear about letting their boys join such a neighborhood underground organization. If constructed as shown here such a cave is safe, dry and warm.

An important feature is the roof construction. This is of semi-trussed design and can be built from old lumber collected in the club members’ backyards. It will drain well and keep the cave warm and dry in the meanest kind of weather.

If you have any choice of location, select a site on a knoll, preferably where there is shrubbery but no large trees, since it will be a hard job to cut through the roots. Besides, that isn’t fair to the trees. In addition to good drainage at the start, the knoll assures a commanding view of surrounding territory.

Grade the excavated dirt away from the hole in an even slope. This helps to conceal its location. Piles of dirt would give you away in a hurry, and scouts from that tough gang over on Boiler Avenue would soon have your stronghold listed for future attack.

Save all the flat stones for the fireplace, unless bricks are available. The latter will make a better fireplace, however, without mortar. The roof or ceiling joists should extend at least a foot on each side of the excavation. The ridge support is made up of two two-by-fours laid one on top of the other, as shown in the diagram. The roof boards should be covered with tar paper or old canvas, or in a pinch, several layers of newspapers. At one end of the roof, tack heavy wire screen under the gable, and further protect this with a row of slats set at an angle. These are to partially support large stones placed against them to conceal the vent. If the stones are big enough they will not impede air circulation to any great extent. A trench is dug for the stove-pipe and, when this is laid, covered over again with dirt. Of course, it will be an advantage to have the chimney as far away from the cave as your supply of stove-pipe will permit. However, be sure that the top of the chimney is one or two feet higher than the stove. Otherwise your draft will be sluggish. Stones should be piled around the chimney to hide it, and it wouldn’t be a bad idea to throw over the chimney itself some old junk, such as rusty washboilers, etc., that will not interfere with draft. In case a potential enemy sees smoke rising he naturally would assume it to be a rubbish fire.

Cover the roof with soil and then spread leaves and brush over it in a natural manner. Next spring new growth will spring up from the seeds thus sown. Dig a drainage trench around the “eaves” and fill with loose brush to hide it.