Interesting note “This display, flashing a brilliant ruby-red, is the first use of solid-state, light-emitting diodes in a consumer product. ” 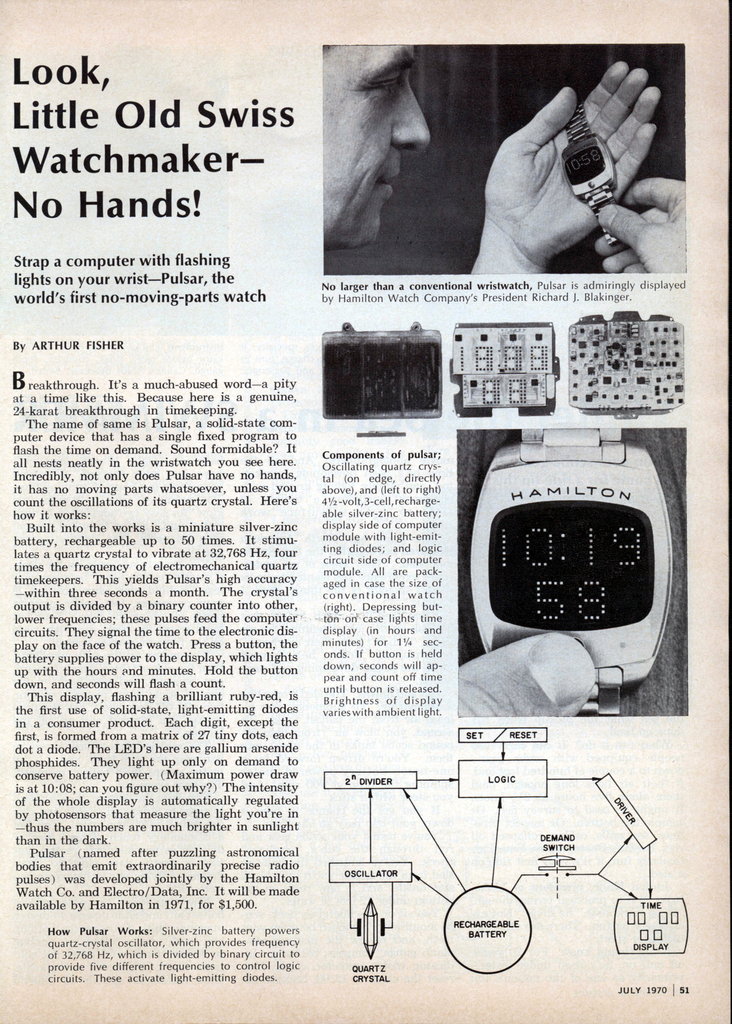 Breakthrough. It’s a much-abused word-a pity at a time like this. Because here is a genuine, 24-karat breakthrough in timekeeping.

The name of same is Pulsar, a solid-state computer device that has a single fixed program to flash the time on demand. Sound formidable? It all nests neatly in the wristwatch you see here. Incredibly, not only does Pulsar have no hands, it has no moving parts whatsoever, unless you count the oscillations of its quartz crystal. Here’s how it works:

Built into the works is a miniature silver-zinc battery, rechargeable up to 50 times. It stimulates a quartz crystal to vibrate at 32,768 Hz, four times the frequency of electromechanical quartz timekeepers. This yields Pulsar’s high accuracy -within three seconds a month. The crystal’s output is divided by a binary counter into other, lower frequencies; these pulses feed the computer’ circuits. They signal the time to the electronic display on the face of the watch. Press a button, the battery supplies power to the display, which lights up with the hours Clnd minutes. Hold the button down, and seconds will flash a count.

This display, flashing a brilliant ruby-red, is the first use of solid-state, light-emitting diodes in a consumer product. Each digit, except the first, is formed from a matrix of 27 tiny dots, each dot a diode. The LED’s here are gallium arsenide phosphides. They light up only on demand to conserve battery power. (Maximum power draw is at 10:08; can you figure out why?) The intensity of the whole display is automatically regulated by photosensors that measure the light you’re in -thus the numbers are much brighter in sunlight than in the dark.

Pulsar (named after puzzling astronomical bodies that emit extraordinarily precise radio pulses) was developed jointly by the Hamilton Watch Co. and Electro/Data, Inc. It will be made available by Hamilton in 1971, for $1,500.

Caption 1: Components of pulsar; Oscillating quartz crystal (on edge, directly above), and (left to right) 4 V2 -volt,3-cell, rechargeable silver-zinc battery; display side of computer module with light-emitting diodes; and logic circuit side of computer module. All are packaged in case the size of conventional watch (right). Depressing button on case lights time display (in hours and minutes) for 1 V. seconds. If button is held down, seconds will appear and count off time until button is released. Brightness of display varies with ambient light.