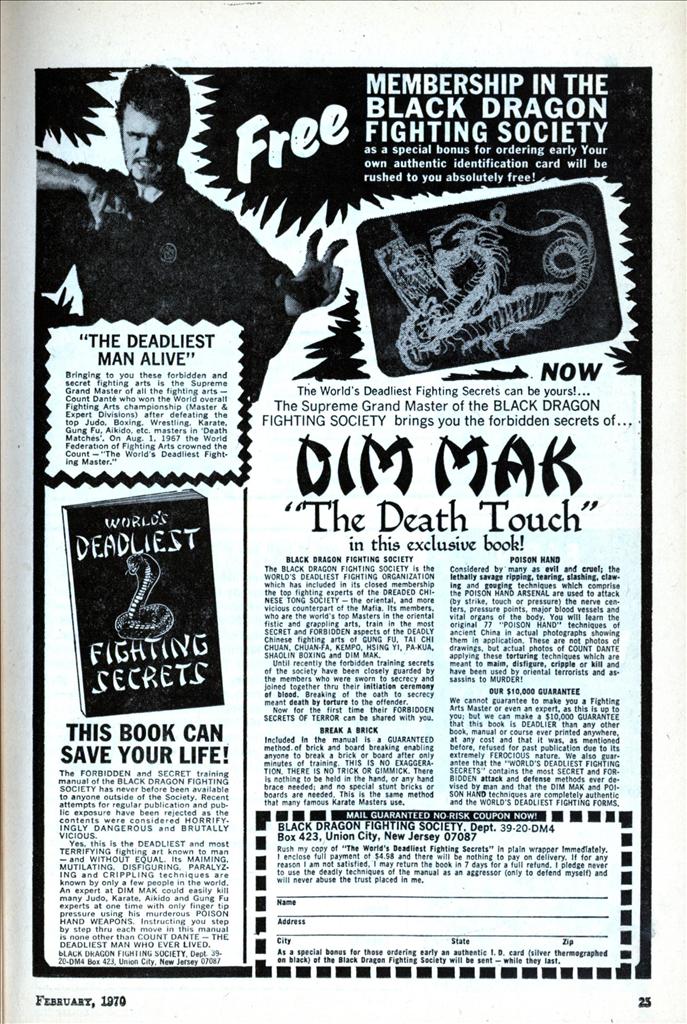 in this exclusive book!

The BLACK DRAGON FIGHTING SOCIETY is the WORLD’S DEADLIEST FIGHTING ORGANIZATION which has included in its closed membership the top fighting experts of the DREADED CHINESE TONG SOCIETY – the oriental, and more vicious counterpart of the Mafia. Its members, who are the world’s top Masters in the oriental fistic and grappling arts, train in the most SECRET and FORBIDDEN aspects of the DEADLY Chinese fighting arts of GUNG FU. TAI CHI CHUAN, CHUAN-FA, KEMPO. HSING Yl, PA-KUA, SHAOLIN BOXING and DIM MAK.

Until recently the forbidden training secrets of the society have been closely guarded by the members who were sworn to secrecy and joined together thru their initiation ceremony of blood. Breaking of the oath to secrecy meant death by torture to the offender.

Now for the first time their FORBIDDEN SECRETS OF TERROR can be shared with you.

Included In the manual is a GUARANTEED method, of brick and board breaking enabling anyone to break a brick or board after only minutes of training. THIS IS NO EXAGGERATION. THERE IS NO TRICK OR GIMMICK. There is nothing to be held in the hand, or any hand brace needed; and no special stunt bricks or boards are needed. This is the same method that many famous Karate Masters use.

Considered by many as evil and cruel; the lethally savage ripping, tearing, slashing, clawing and gouging techniques which comprise the POISON HAND ARSENAL are used to attack (by strike, touch or pressure) the nerve centers, pressure points, major blood vessels and vital organs of the body. You will learn the original 77 “POISON HAND” techniques of ancient China in actual photographs showing them in application. These are not photos of drawings, but actual photos of COUNT DANTE applying these torturing techniques which are meant to maim, disfigure, cripple or kill and have been used by oriental terrorists and assassins to MURDER!

We cannot guarantee to make you a Fighting Arts Master or even an expert, as this is up to you; but we can make a $10,000 GUARANTEE that this book is DEADLIER than any other book, manual or course ever printed anywhere, at any cost and that it was, as mentioned before, refused for past publication due to its extremely FEROCIOUS nature. We also guarantee that the “WORLD’S DEADLIEST FIGHTING SECRETS” contains the most SECRET and FORBIDDEN attack and defense methods ever devised by man and that the DIM MAK and POISON HAND techniques are completely authentic and the WORLD’S DEADLIEST FIGHTING FORMS.