This is one of those things were technology has really helped. Before DNA tests the only things they had to go on were blood tests and lie detectors. 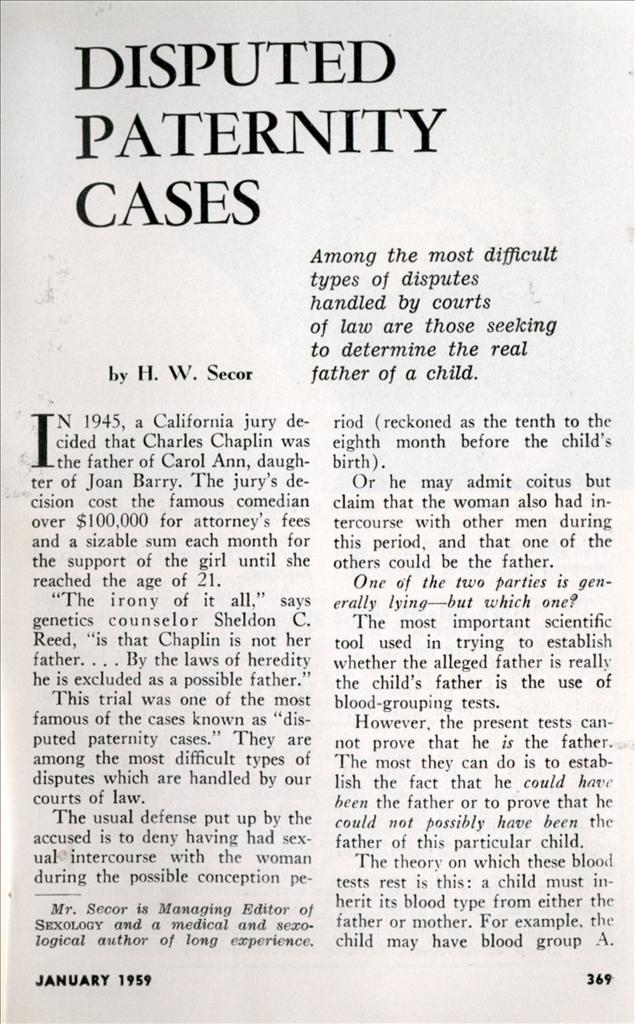 Among the most difficult types of disputes handled by courts of law are those seeking to determine the real father of a child.

IN 1945, a California jury decided that Charles Chaplin was the father of Carol Ann, daughter of Joan Barry. The jury’s decision cost the famous comedian over $100,000 for attorney’s fees and a sizable sum each month for the support of the girl until she reached the age of 21.

“The irony of it all,” says genetics counselor Sheldon C. Reed, “is that Chaplin is not her father. … By the laws of heredity he is excluded as a possible father.”

This trial was one of the most famous of the cases known as “disputed paternity cases.” They are among the most difficult types of disputes which are handled by our courts of law.

The usual defense put up by the accused is to deny having had sexual intercourse with the woman during the possible conception period (reckoned as the tenth to the eighth month before the child’s birth).

Or he may admit coitus but claim that the woman also had intercourse with other men during this period, and that one of the others could be the father.

One of the two parties is generally lyingâ€”but which one?

The most important scientific tool used in trying to establish whether the alleged father is really the child’s father is the use of blood-grouping tests.

The theory on which these blood tests rest is this: a child must inherit its blood type from either the father or mother. For example, tin-child may have blood group A.

This blood group must have been inherited from one of the two parents.

The mother and the alleged father, let us say, are both found to have group B. In this case the male is immediately ruled out as the possible father. The real father would have to be a male with blood group A.

On the other hand suppose the alleged father is of blood group A. Does this prove he is the real father? No, it merely proves that he could be the fatherâ€”but so could any other male with blood group A.

This is a simple illustration of blood grouping tests. The tests are quite complicated and involve many blood group combinations. However, they cannot prove actual paternity.

According to the authority in the field, Sidney B. Schatkin, who handles all paternity proceedings for the New York City Corporation Counsel’s office, complete blood tests can discover 55 out of 100 false accusations of fatherhood. This of course involves only a portion of the cases.

One of the additional important methods used to determine the truth in these cases is the use of lie detector tests. This method has been utilized for many years by a number of judges of the Chicago courts. According to a six-year study made by a Chicago lie detection laboratory, the method has had considerable success.

The laboratory, John E. Reid and Associates, found that out of 312 disputed paternity eases handled by them, 93 per cent of the parties tested had lied in their testimony about their sexual relationship.

After taking the lie-detector test, about 82 per cent of the persons involved confessed having committed perjury.

It should be noted here that lie-detector test results are admitted as evidence in court only when both parties agree beforehand that the results of the tests are to be admitted in the trial as evidence.

What are the common types of lies that turn up in disputed paternity tests?

Very common is the claim by the mother that she had not had intercourse with any other male during the conception period â€” forty per cent of the mothers confessed to lying about this.

Often, instead of accusing the real father, the mother decides to accuse a man she loves, in the hope that he will marry her. Or she may choose a male with wealth and position or one who is single.

Many witnesses for the accused father will swear that they also had sexual intercourse with the mother during the conception periodâ€”57 per cent of these witnesses confessed to lying after taking the lie-detector test.

The most common defense of the men accused was to admit coitus with the mother, but not during the conception period. This was found to be true in only 26 out of 311 cases.

Thus it can be seen that the lie-detector, despite important limitations, may have considerable value in disputed paternity tests.