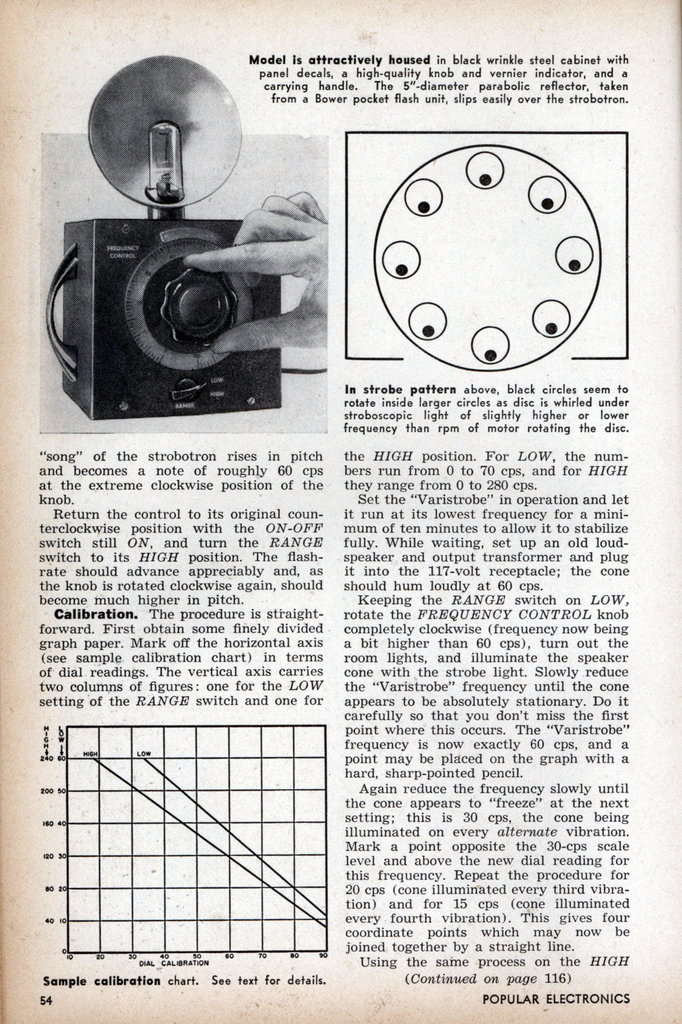 The “Varistrobe” consists essentially of a power supply, a time-base circuit or variable multivibrator, and a strobotron neon tube (631-P1, also called 1D21/SN4) which is triggered by the impulses from the multivibrator. On the LOW setting of the RANGE switch, the flash-rate may be varied from about 15 cps to a little above 60 cps; when set in the HIGH position, frequencies between 60 cps and 240 cps are easily covered. The intentional overlap of the two ranges permits the user to obtain any flash-rate from 15 cps (900 flashes per minute) to 240 cps (14,400 flashes per minute). The latter is the upper limit of the rating of the strobotron.

Each flash lasts between 1/2500 second and 1/5000 second. When the flash-rate is synchronized with the moving object, most of the motion occurs in darkness. The object is thus illuminated briefly in approximately the same spot each time it comes around, so that it appears stationary. If the flash-rate is a bit slower or faster than the number of rps, the rotation or reciprocation will be seen as a lazy, crawling motion.

Construction. Many of the chief structural details are shown in the photographs and illustrations. The power transformer, filter capacitor, discharge capacitor, and frequency control potentiometer all appear above the chassis; the smaller components and the RANGE switch are mounted below the chassis.

The RANGE switch is a four-circuit, double-throw type. It was chosen for its availability in standard catalogs and for its small size. Only three of the contacts are employed in a single-throw arrangement. When you are wiring this switch into the circuit, be careful to arrange the contacts so that all three of the LOW setting capacitors (CZa, C5, and C6) are connected across their mates (C2b, C/f, and C7) when switch is in LOW position.

You’ll take real pride in the unit if you add panel decals, a high-quality knob and vernier indicator, and a carrying handle. Effectiveness of the strobotron illumination is heavily dependent upon the quality of the reflector used behind it. The one shown in the pictures comes from an inexpensive Bower pocket flash.

Testing. Set the RANGE switch on LOW and rotate the potentiometer knob (Rll) clockwise until the switch just clicks on. In about 30 seconds or less, the strobotron should start to flash at its slowest rate. At this point, it is very important to remove the 6SN7GT from its socket while the strobotron is flashing. This should extinguish the glow in the strobotron completely. If the flashing continues with the multivibrator tube removed, it indicates that the anode grid voltages on the strobotron are incorrectâ€”which may be caused by one or more of the following faults :

(a) R2 and R3 may have been interchanged.

(c) Rl or R2 or both may be shorted by some incorrect connection.

(d) The voltage output of the transformer may be too high if any other but the specified type is used. The voltage measured across the filter capacitor (CI) should be just about 300 volts.

If everything is working correctly, replace the 6SN7GT in its socket, and allow it to warm up once again. Slowly rotate the FREQUENCY CONTROL knob clockwise. The flash-rate should rise smoothly and evenly. As the frequency increases, the “song” of the strobotron rises in pitch and becomes a note of roughly 60 cps at the extreme clockwise position of the knob.

Return the control to its original counterclockwise position with the ON-OFF switch still ON, and turn the RANGE switch to its HIGH position. The flash-rate should advance appreciably and, as the knob is rotated clockwise again, should become much higher in pitch.

Calibration. The procedure is straightforward. First obtain some finely divided graph paper. Mark off the horizontal axis (see sample calibration chart) in terms of dial readings. The vertical axis carries two columns of figures: one for the LOW setting of the RANGE switch and one for the HIGH position. For LOW, the numbers run from 0 to 70 cps, and for HIGH they range from 0 to 280 cps.

Set the “Varistrobe” in operation and let it run at its lowest frequency for a minimum of ten minutes to allow it to stabilize fully. While waiting, set up an old loudspeaker and output transformer and plug it into the 117-volt receptacle; the cone should hum loudly at 60 cps.

Keeping the RANGE switch on LOW, rotate the FREQUENCY CONTROL knob completely clockwise (frequency now being a bit higher than 60 cps), turn out the room lights, and illuminate the speaker cone with the strobe light. Slowly reduce the “Varistrobe” frequency until the cone appears to be absolutely stationary. Do it carefully so that you don’t miss the first point where this occurs. The “Varistrobe” frequency is now exactly 60 cps, and a point may be placed on the graph with a hard, sharp-pointed pencil.

Again reduce the frequency slowly until the cone appears to “freeze” at the next setting; this is 30 cps, the cone being illuminated on every alternate vibration. Mark a point opposite the 30-cps scale level and above the new dial reading for this frequency. Repeat the procedure for 20 cps (cone illuminated every third vibration) and for 15 cps (cone illuminated every fourth vibration). This gives four coordinate points which may now be joined together by a straight line.

Using the same process on the HIGH setting of the RANGE switch yields the calibration line from 60 cps to 240 cps. This may be drawn on the same sheet of paper as shown in the sample. In this case, start from 60 cps and work your way up in frequency. Cessation of motion can be observed for 60 cps, 120 cps, 180 cps, and 240 cps, giving four points for the second calibration line. Now your tachometer graph is ready for use.

To find the speed of any rotating or reciprocating body, scratch or chalk it in one spot that will be clearly visible while it is in motion. Next, determine the highest frequency which freezes the reference mark so that it is visible in only one place. The dial may now be read and translated in cps from the graph. To convert cps into revolutions or reciprocations per minute, multiply the cps by 60.