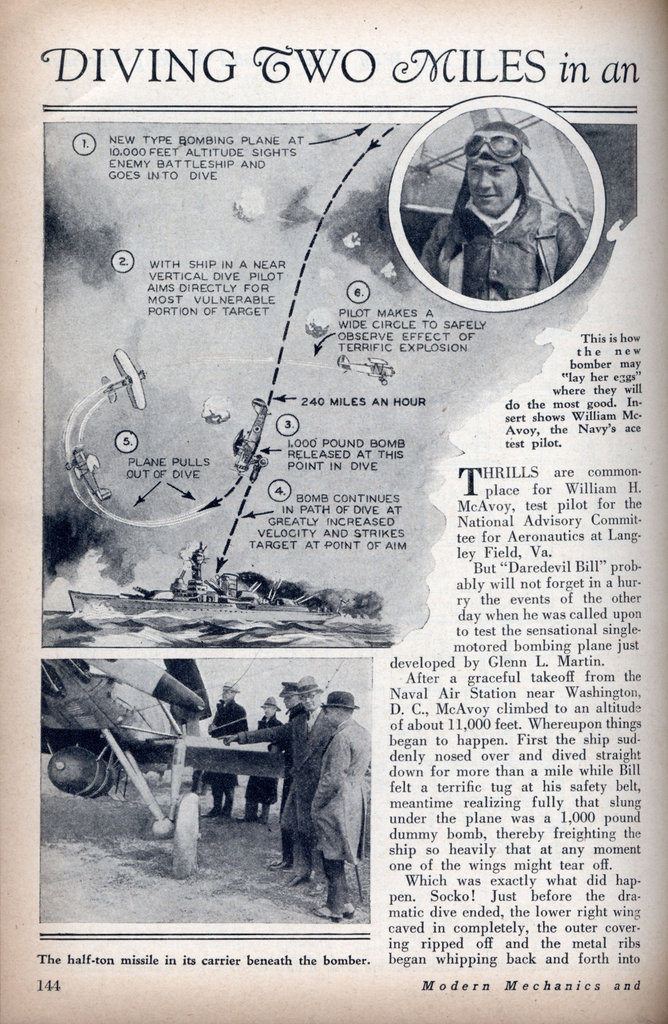 THRILLS are commonplace for William H. McAvoy, test pilot for the National Advisory Committee for Aeronautics at Langley Field, Va.

But “Daredevil Bill” probably will not forget in a hurry the events of the other day when he was called upon to test the sensational single-motored bombing plane just developed by Glenn L. Martin.

After a graceful takeoff from the Naval Air Station near Washington, D. C, McAvoy climbed to an altitude of about 11,000 feet. Whereupon things began to happen. First the ship suddenly nosed over and dived straight down for more than a mile while Bill felt a terrific tug at his safety belt, meantime realizing fully that slung under the plane was a 1,000 pound dummy bomb, thereby freighting the ship so heavily that at any moment one of the wings might tear off.

Which was exactly what did happen. Socko! Just before the dramatic dive ended, the lower right wing caved in completely, the outer covering ripped off and the metal ribs began whipping back and forth into the wind.

Not a whit dismayed, McAvoy took a firm grip on the controls, got the ship in hand just in time to save the entire wing from collapsing, and landed safely.

What the government experts have been striving for in their tests with the “egg-laying” plane is to develop a ship strong enough to make a 10,000 foot power dive while carrying a 1,000 pound combat bomb. So that, following McAvoy’s first experimental flight, the wings on the new plane were made far more durable.

A few days later McAvoy once more took the ship up, carrying the regulation 1,000 pound bomb. This was the first time in history that a plane had withstood the terrific beating of carrying a 1,000 pound bomb straight down from the skies for nearly two miles, at more than four miles a minute, and then, still carrying that bomb, climbing up again from the dive with ease, without damage to the airplane.

In actual warfare, of course, the ship wouldn’t have to carry the bomb through the pull-up. But the pilot must know that in case the bomb fails to release, his plane is strong enough to come out of the dive still freighted with its half-ton weight.