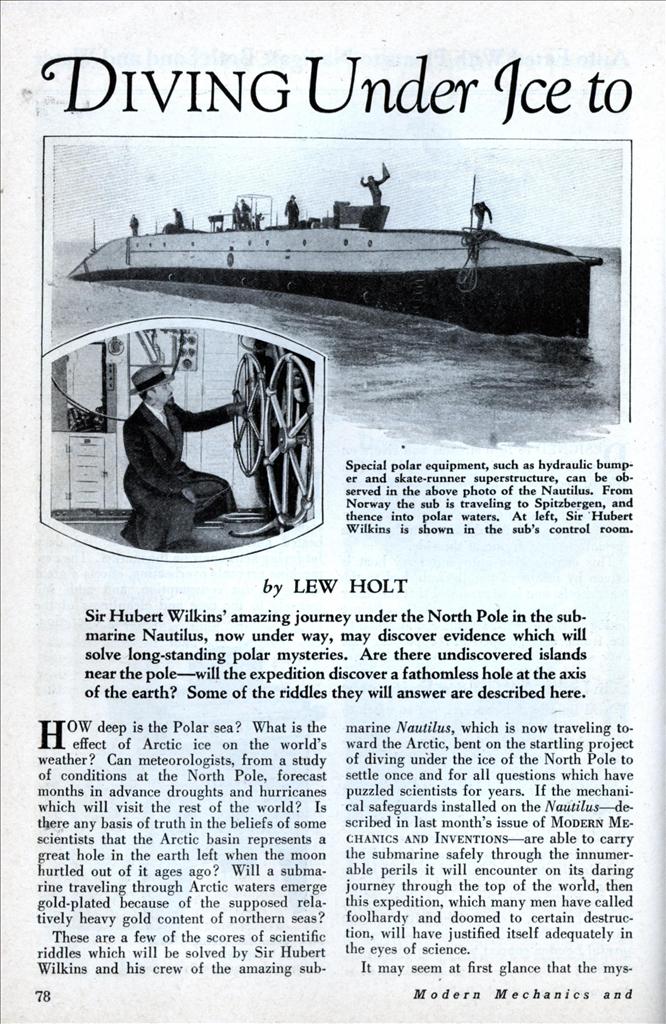 Sir Hubert Wilkins’ amazing journey under the North Pole in the submarine Nautilus, now under way, may discover evidence which will solve long-standing polar mysteries. Are there undiscovered islands near the pole—will the expedition discover a fathomless hole at the axis of the earth? Some of the riddles they will answer are described here.

HOW deep is the Polar sea? What is the effect of Arctic ice on the world’s weather? Can meteorologists, from a study of conditions at the North Pole, forecast months in advance droughts and hurricanes which will visit the rest of the world? Is there any basis of truth in the beliefs of some scientists that the Arctic basin represents a great hole in the earth left when the moon hurtled out of it ages ago? Will a submarine traveling through Arctic waters emerge gold-plated because of the supposed relatively heavy gold content of northern seas? These are a few of the scores of scientific riddles which will be solved by Sir Hubert Wilkins and his crew of the amazing submarine Nautilus, which is now traveling toward the Arctic, bent on the startling project of diving under the ice of the North Pole to settle once and for all questions which have puzzled scientists for years. If the mechanical safeguards installed on the Nautilus—described in last month’s issue of Modern Mechanics and Inventions—are able to carry the submarine safely through the innumerable perils it will encounter on its daring journey through the top of the world, then this expedition, which many men have called foolhardy and doomed to certain destruction, will have justified itself adequately in the eyes of science.

It may seem at first glance that the mysteries locked in Arctic ice can have little practical interest to a world which occupies warmer lands thousands of miles removed from the North Pole. But if, through the establishment of weather stations at various points in the Arctic, meteorologists are able to gather information which will enable them to tell the corn growers of Iowa that they are due to have a hot, dry summer two years hence, or to inform orange growers of California that the season of 1935 will be wet and cold, then the value of the information gathered at the top of the world will have proved itself well-nigh priceless. That is one of the purposes of the Wilkins expedition. It hopes to find spots where permanent weather stations can be established.

It has been calculated that 18,000 cubic miles of drift ice reach the Atlantic ocean yearly from Arctic regions. When you consider that all the people in the world can crowd into a space of one cubic mile, as illustrated elsewhere in this article, you begin to realize the tremendous volume of ice which affects the world’s weather. There is even more ice in the Antarctic—so much that sea levels throughout the globe would be raised 30 feet if it were to melt in a day. The movement and distribution of polar ice is not uniform from year to year. Weather stations could report on its distribution and so supply information which, in connection with knowledge already at hand from temperate regions, would make long-distance forecasting a possibility.

There may be islands in the Arctic sea on which permanent stations could be established. If there are, the Nautilus is likely to find them. There are thousands of miles of polar wastes which have never been explored. Who can predict what mystery land may be discovered by the expedition? The whole trip is the most amazing voyage of exploration since the days of Columbus. All existing maps may have to be re-drawn when Wilkins returns.

No one has any idea of the contour of the bottom of the Arctic basin. There is even a theory which has gained some credence that there may be a hole through the center of the earth, extending to unfathomable depths. This is not likely, but possible. The fact that the sounding instruments carried to the Pole by Peary were not long enough to strike bottom has given encouragement to believers in this theory. No one can definitely say, now, what the facts are—but when the Nautilus returns it will bring with it an accurate chart of the sea bottom. Soundings will be made by the electrical method familiarly known as the “sonometer”, in which a sound wave is sent from the submarine to the bottom of the sea and its return echo registered. The time interval consumed makes it easy to compute the distance traveled.

Ice drills in the submarine which can bore through 100 feet of ice enable fresh air to be brought aboard the ship, and makes it possible for observers from the sub to get out on the ice to study polar conditions, even when there is no stretch of open water available for the ship to come to the surface.

A photographic balloon filled with helium will be used to send up a camera to take aerial photos. In case it seems desirable to know the nature of the country before venturing out of the submarine, the camera balloon can be sent up through the conning tower and an air photo snapped. This will show the country for miles around. A compass carried in the balloon will be photographed on the same plate, so that the problem of direction will be solved. In effect, the aerial balloon will produce a made-to-order map in an emergency.

Water-tight movie cameras are also part of the equipment of the Nautilus. With them pictures can be taken beneath the ice of the polar sea.

Experiments in short-wave radio broad- casting will be conducted at the Pole. It is not known whether the sub can broadcast when submerged, but it will be lying on the surface often enough so that operators in the United States with short-wave receivers should be successful in catching the signals from the North Pole.

What sort of life exists in the Arctic? Walrus and polar bears are about all that occur to the average person. But there is unquestionably a wide variety of sea life, animal and vegetable, existing in minute form in Polar waters. A unique mechanism by which the Nautilus can collect samples of such life, and preserve them for reference, has been devised.

A roll of muslin, unfolding something after the fashion of a roll of film, will filter samples of Arctic water through it constantly. Sea life which collects on the muslin will be preserved as the roll is wound up. Later on, when the sub returns to civilization, it will be a simple matter to unroll the precious muslin and make an exhaustive study of the sea life adhering to it. No one can predict what odd forms of life will be discovered.

Even the bottom of the sea will yield up its secrets. Hollow tubes will be lowered from the submarine, collecting deposits of ooze which will give geologists an insight into the physical construction of the northern hemisphere. Evidence thus collected may serve to disprove or substantiate current theories as to the origin of the world. Perhaps, ages ago, there was land at the Pole where now is only water. Perhaps the temperature was warmer, the land occupied by a long vanished race. If so, the sample-collecting tubes of the Nautilus will probably supply the evidence. Magnetism, that odd force which operates compasses, will likewise be studied. Probably the Nautilus will float directly over the magnetic pole. If she does, her compass needles will likely point vertically instead of to the north.

What about currents in the Arctic ocean? It is roughly known that there is a current flowing from the Bering Sea towards Spitsbergen, but there is very little real knowledge on the subject. Many problems of economic importance can be hastened toward solution when scientists know more about Arctic currents. For instance, it is possible that the great Hudson Bay country in Canada can be opened up by connecting it with England by means of a submarine trade route. Hudson Bay is a natural sea outlet for the great wheat-raising country of western Canada. If the Nautilus demonstrates its ability to fend off and dodge icebergs in the region of Greenland, the submarine may come into its own as a wheat cargo carrier. For, as a glance at the map reproduced elsewhere in this article will show, a northern submarine route between Hudson Bay and Liverpool, a world wheat market, is the most direct and shortest that can exist. Furthermore, a submarine can carry a respectable cargo tonnage which may some day make it a competitor of steamers in certain cases.

The “polar front” theory of weather prediction, which may be studied by the Wilkins expedition through the use of sounding balloons and instruments for measuring air densities, has as its basis the following facts: The mass of air in the northern hemisphere is 10,000,000,000 tons greater in January than in the following July. This means that this vast tonnage of air is shifted once a year, developing terrific energy. The horsepower developed by winds has been calculated at 20,000,000,000. Some day this vast source of latent power may be tapped.

Even the force of gravity, always a mystery, but today more mysterious than ever with Prof. Albert Einstein challenging the principles established by the great Newton, will be investigated by the expedition. It is known that the force of gravity varies in different locations on the earth. Instruments carried on the Nautilus will enable scientific members of the crew to take records that may have an important bearing on the mystery of gravitation.

Some one has suggested to Sir Hubert Wilkins that his submarine will be gold-plated when it comes home from the Arctic. It is supposed that the Arctic ocean has a heavy gold content, and that it will be deposited on the metallic sub, attracted by the electric batteries which propel the ship—a sort of huge electroplating scheme devised by nature. There is little likelihood that this much to be desired event will come to pass, but there is a certain amount of justification for the prediction. Not only Arctic seas, but all sea water, contains minute quantities of gold in suspension. Science has long known this, but no satisfactory means of extracting the metal cheaply has yet been devised. Submarines traveling through temperate waters have shown no tendency to collect gold-plate on their hulls.

It will be seen from the foregoing that it would be a brave man indeed who would describe the Wilkins expedition as a mere adventure. It is an adventure, of course— so was the journey of Columbus to the new world—but it is a project which may prove of inestimable value to the world at large.

There is always the possibility that these daring men may not come back. The Nautilus may be crushed in grinding ice, may become hopelessly wedged in the bottom of an iceberg. No one denies the dismaying odds of peril and sudden death which confront the expedition.

Even as you read these words, the Nautilus is somewhere on its way toward its amazing goal.