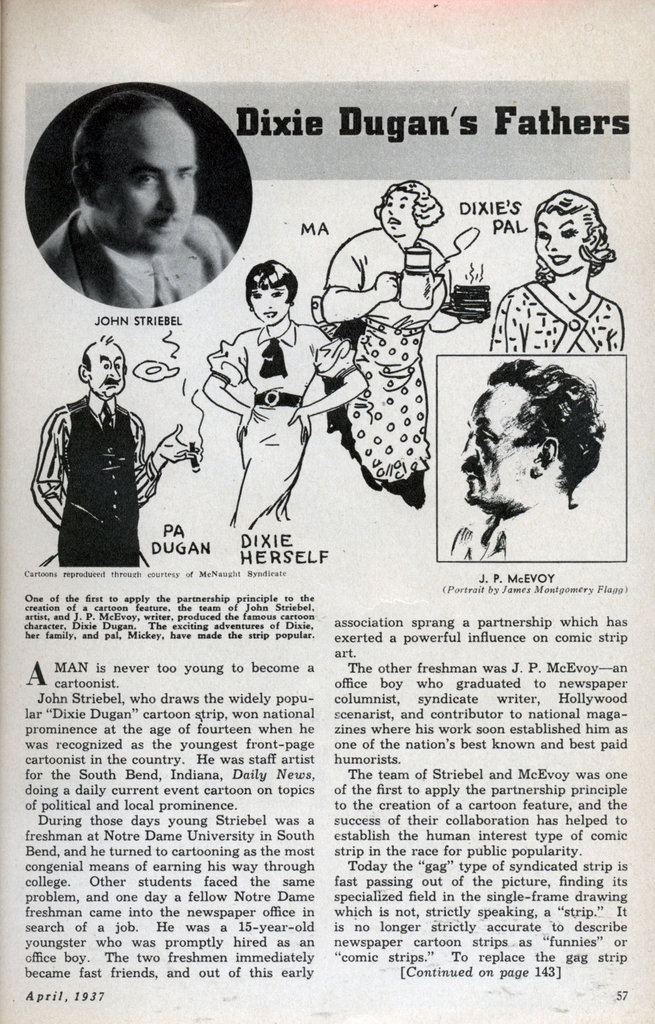 A MAN is never too young to become a cartoonist. John Striebel, who draws the widely popular “Dixie Dugan” cartoon strip, won national prominence at the age of fourteen when he was recognized as the youngest front-page cartoonist in the country. He was staff artist for the South Bend, Indiana, Daily News, doing a daily current event cartoon on topics of political and local prominence.

During those days young Striebel was a freshman at Notre Dame University in South Bend, and he turned to cartooning as the most congenial means of earning his way through college. Other students faced the same problem, and one day a fellow Notre Dame freshman came into the newspaper office in search of a job. He was a 15-year-old youngster who was promptly hired as an office boy. The two freshmen immediately became fast friends, and out of this early association sprang a partnership which has exerted a powerful influence on comic strip art.

The other freshman was J. P. McEvoyâ€”an office boy who graduated to newspaper columnist, syndicate writer, Hollywood scenarist, and contributor to national magazines where his work soon established him as one of the nation’s best known and best paid humorists.

The team of Striebel and McEvoy was one of the first to apply the partnership principle to the creation of a cartoon feature, and the success of their collaboration has helped to establish the human interest type of comic strip in the race for public popularity.

Today the “gag” type of syndicated strip is fast passing out of the picture, finding its specialized field in the single-frame drawing which is not, strictly speaking, a “strip.” It is no longer strictly accurate to describe newspaper cartoon strips as “funnies” or “comic strips.” To replace the gag strip which was the reigning favorite a decade ago, there has come the serial story told in picturesâ€” a story of adventure, family life, or romance in which the leading characters pass through a succession of incidents just as they would in a fiction serial. The team of Striebel and McEvoy has been a leader in this transformation.

“Dixie Dugan” is a typical human interest strip which is the product of two specialists. John Striebel is the artist; J. P. McEvoy is the creator of the characters. Dixie Dugan, the heroine who gives the strip its name, is a modern, attractive working girl whose adventures and tribulations with Pa and Ma Dugan, her girl pal, Mickey, and her various boy friends run the gamut of human interest. McEvoy is a skillful storyteller, Striebel an accomplished artist, and the successful merging of their two types of genius has set a pattern which can be observed in numerous other writer-artist teams prominent in the strip cartoon field.

The collaboration of Striebel and McEvoy did not begin until some years after their Notre Dame friendship. Striebel went to Chicago when he finished college and entered the game of fashion drawing and advertising illustration. McEvoy, too, was in Chicago working as a newspaper columnist. When the Chicago Tribune asked McEvoy to originate a Sunday feature, he proposed that John Striebel illustrate it. The feature was “The Potters,” which rose to phenomenal national popularity. That was the beginning of the team of Striebel and McEvoy.

Artist Striebel was doing other work at the same time, including magazine covers and the drawings for Robert Quillen’s syndicated feature, “Aunt Het.” The desire to do a comic strip had always been in the back of his mind. This was quite natural, for there is no surer and swifter road to the big money for a cartoonist than through the medium of a syndicated strip, with scores of newspapers throughout the country buying reproduction rights. Striebel originated a strip which he called “Pantomime” and it ran successfully for six years.

During this period he moved to Woodstock, New York, well known as an artists’ colony, to study painting. Thousands of Dixie Dugan fans will recognize Woodstock as the town of “Stood-wock” which occasionally figures in the drawings.

While carrying on his Pantomime strip, Striebel was also illustrating a serial called “Show Girl” which McEvoy was contributing to a national magazine.

It is typical of the modern trend in strip cartooning that Dixie Dugan should have been born out of a magazine serial. The idea for the strip grew out of the Show Girl heroine, and it is the serial story, pictorially presented, which explains the appeal of the Dixie Dugan strip. It is this same appeal which underlies the success of the vast majority of present-day cartoon strips, and the artist with a lively fictional imagination as well as a facile pen is ideally equipped for an assault on the field. Few professions offer swifter or more lavish rewards. A yearly contract of $100,000 is by no means exceptional for the man who can create a pen-and-ink character such as Andy Gump, by the late Sidney Smith.

John Striebel reminds one of Douglas Fairbanks in appearance, and he has a genial, observant eye for the foibles of humanity which is reflected in the Dixie Dugan strip. Not all cartoonists are accomplished artists in other media than pen and ink, nor does the profession demand that they should be, but Striebel is an expert in oils and water colors and a great many of his paintings have been reproduced as magazine covers.

Having begun his career at the age of fourteen, he looks up from Dixie Dugan on his drawing board and says whimsically, “Now I’m experimenting with the popular idea that life begins at forty.”