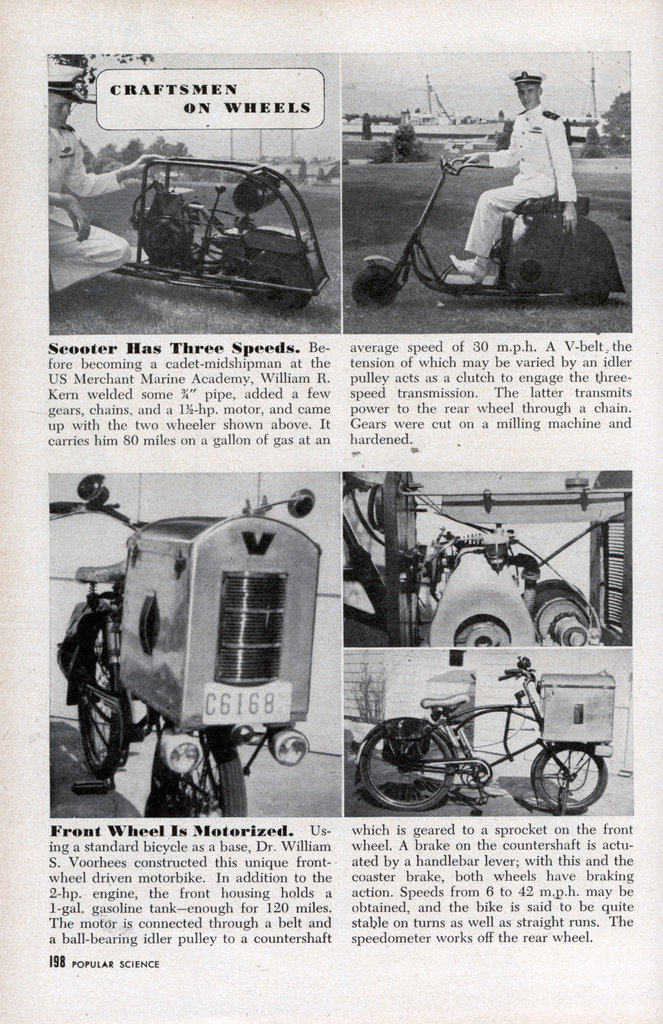 Scooter Has Three Speeds. Before becoming a cadet-midshipman at the US Merchant Marine Academy, William R. Kern welded some 3/4″ pipe, added a few gears, chains, and a 1/2-hp. motor, and came up with the two wheeler shown above. It carries him 80 miles on a gallon of gas at an average speed of 30 m.p.h. A V-belt, the tension of which may be varied by an idler pulley acts as a clutch to engage the three-speed transmission. The latter transmits power to the rear wheel through a chain. Gears were cut on a milling machine and hardened.

Front Wheel Is Motorized. Using a standard bicycle as a base, Dr. William S. Voorhees constructed this unique front-wheel driven motorbike. In addition to the 2-hp. engine, the front housing holds a 1-gal. gasoline tankâ€”enough for 120 miles. The motor is connected through a belt and a ball-bearing idler pulley to a countershaft which is geared to a sprocket on the front wheel. A brake on the countershaft is actuated by a handlebar lever; with this and the coaster brake, both wheels have braking action. Speeds from 6 to 42 m.p.h, may be obtained, and the bike is said to be quite stable on turns as well as straight runs. The speedometer works off the rear wheel.

Scooter Takes Hills Easily. Employing a reduction of about four to one from motor to driven wheel makes this little scooter an excellent climber. Since it uses a 2.3-hp. engine, it still has enough power to cruise at 35 m.p.h. The Rev. J. Karlton Dewey, who built the machine, used 1/2″ water pipe for the frame and welded all joints. Fittings are made from flat and angle iron. Clutch action is obtained through a jackshaft located just behind the motor. The shaft, which swivels in a horizontal plane, is moved by a pedal to slacken or tighten the drive belts in operation.

Motorbike Built from Scrap
Cast-off parts that he found lying around his father’s machine shop became the raw materials for Robert Barr’s lightweight motorcycle. A washing-machine motor, to which he added a carburetor for smoother performance, gives Barr a top speed of better than 40 m.p.h. Wheels, front assembly, and coaster brake were salvaged from old bicycles, and additions to the frame were made of 3/8″ gas pipe. Drive pulleys and chain sprockets give a ratio of 6 to 1.

Aluminum Goes for a Ride.
Bob Wurgaft gets a top speed of 25 m.p.h, from his aluminum-framed scooter. It uses a 3/4-hp. washing-machine motor whose action simplifies the design. For one thing the machine needs no clutch because it starts readily with just a slight push; the brake was also omitted since it was found that motor compression stopped the wheels quickly after the motor was shut off. With two passengers a cruising speed of about 15 m.p.h, is obtained.