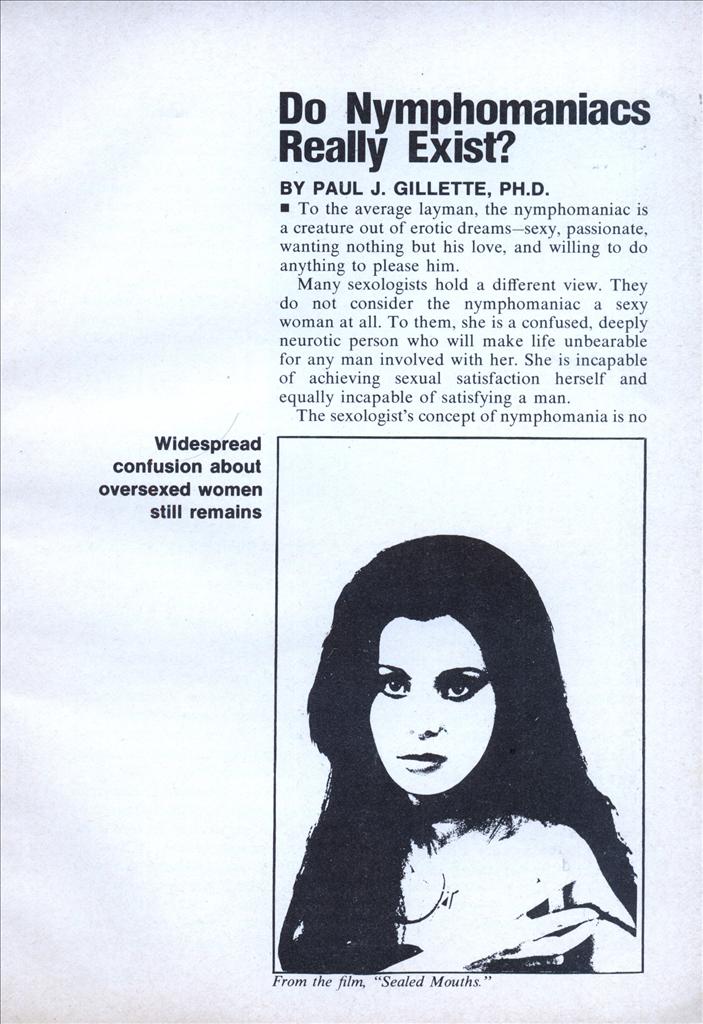 Many sexologists hold a different view. They do not consider the nymphomaniac a sexy woman at all. To them, she is a confused, deeply neurotic person who will make life unbearable for any man involved with her. She is incapable of achieving sexual satisfaction herself and equally incapable of satisfying a man.

The sexologist’s concept of nymphomania is no more realistic than the layman’s notions. The important question is whether nymphomaniacs really exist.

The term, nymphomania, became well known in the late Nineteenth Century, when psychology was in its infancy, and the study of sex was confined largely to physicians.

These physicians had never studied sexual behavior in itself. They had been trained only in genital anatomy and physiology. However, since no one else seemed to know any more about the subject, they were accepted as experts.

To describe the condition of these sexually “sick” women, Nineteenth Century physicians coined the word, “nymphomania,” which quickly entered the general vocabulary. The condition which it purported to describe was recognized as a legitimate disease.

These same symptoms, in a male, were taken as evidence of healthy, heterosexual normalcy.

The diagnosis of nymphomania was, therefore, a moral judgment, based on the premise that females are not supposed to enjoy sex. A woman labeled a nymphomaniac was also described as “degenerate,” “depraved,” “licentious,” “lascivious,” “tainted” and “wicked.”

The German sexologist, Dr. Iwan Bloch wrote in one case history: “Madame V. . . . Since her earliest years, she has pursued handsome men and given herself to them. When a young girl, by this degrading conduct she reduced her parents to despair. . . .

“Of an amiable character, she blushed when anyone spoke a word to her. She cast her eyes down when in the presence of several persons; but as soon as she was alone with a young or old man, or even with a child, she was immediately transformed; she lifted her petticoats, and attacked with a raging energy him who was the object of her insane love. . . .

“The more excesses she committed, the more she wanted to commit. It is hardly credible that such debased ideas and habits should leave intact such a sweet expression of countenance, a voice so youthful, a behavior so full of calm repose, and a glance of such clear assurance . . .” [Italics supplied] Dr. Bloch’s contemporaries are no less judgmental. Consider the report of Dr. Charles Moreau in Des aberrations dusens genesique, published in 1880, about a young girl who “suddenly became a nymphomaniac when forsaken by her betrothed.”

Dr. Moreau writes: “She reveled in cynical songs and expressions, and ran about in the streets, making lascivious gestures. She refused to put on her garments, had to be held down in bed by muscular men, and furiously demanded coitus.

“She suffered insomnia, congestion of the facial nerves, a dry tongue, and a rapid pulse. Within a few days, she had a lethal collapse.”

In the 1882 edition of Dictionaire des sciences medicale, Dr. Louyer-Villermay writes of “Miss X., aged thirty, modest and decent” who “was suddenly seized with an attack of nymphomania, unlimited desire for sexual gratification, obscene delerium.” Her fate: “Death from exhaustion within a few days.”

In 1886, summing up the data then available in Europe, Dr. Richard von Krafft-Ebing, professor of psychiatry and nervous disorders at the University of Vienna, concluded that “abnormally increased sexual desire”— which he termed “hyperesthesia”— ranged in intensity from mild to manic.

All forms, he wrote, were caused by an “hereditary taint.” The manic stage was one in which sexual desires “become so predominant that they sway completely the imagination and desire, and imperatively de- mand the relief of the effect in the corresponding sexual act.”

In the first half of the Twentieth Century Dr. Sigmund Freud, and other writers, dispelled the myth that only a “sick” woman could enjoy sex.

In his reports on male and female sexual behavior, Dr. Alfred C. Kinsey demonstrated that sexual desire is as much a part of the biological heritage of females as it is of males.

But most people today still refuse to think of women as men’s sexual equals. They regard as nymphomaniacal a woman whose sexual behavior, if exhibited by a male, would be considered normal.

The very words by which this desire is described render the definition scientifically useless. All of these terms call for a moral or philosophical judgment.

When we say that a woman’s desire is extreme, excessive or abnormal, all we really are saying is that she desires sex more often than we think she should.

When we say that her desire is uncontrollable, we mean that she has sex more frequently or with a greater variety of partners than we deem proper.

When we say that her desire is insatiable, we mean that she wants more sexual satisfaction than we think she should have.

The attempt to pass off moral judgment as scientific fails. Scientifically speaking, there is no right or proper level of sexual desire. In females as well as in males, it is influenced by a variety of physical and psychological factors.

The intensity of a given female’s— or male’s—sexual desire is not something which rightfully can be considered “sick.”

This does not mean that a woman’s sexual behavior is never connected with emotional problems.

A woman may behave sexually in a way of which she herself does not approve. An example is the girl who “just can’t say no”^and who has coitus with virtually every man who wants her, despite her lack of desire for these men and her belief that her behavior is morally wrong.

Another example is the woman who repeatedly selects sexual part- ners who abuse her and treat her in such a way that she finds it difficult to maintain her self-respect.

A third example is the woman who uses sex as a weapon to achieve nonsexual ends—for instance, the housewife who repeatedly makes a laughingstock of her husband by going to bed with his friends, or the teenager who takes on the entire high school football team in order to embarrass her mother and father.

All these women obviously have sexual problems, but the problem is not that they are nymphomaniacs. Their trouble is that they are compulsively behaving against their own best interests. What difference does it make whether we call the problem “nymphomania” or something else?

It may make all the difference in the world. When we say that a woman is a nymphomaniac, we are perpetuating the myth of female sexual inferiority and are condemning the woman on moral or philosophical grounds.

When we refuse to label a woman’s behavior and instead merely describe it with non-judgmental terms, we are taking the first step toward solving her problem—assuming, of course, that she has a problem.

Nymphomania, therefore, is one of a large number of sexual terms which sounds scientific until an attempt is made to define it. Thereupon they reveal themselves to be highly unscientific terms which accuse rather than describe.

Some women behave sexually in a way which is self-defeating, frustrating, or otherwise problematic. But, the problem is not that such women are nymphomaniacs. Nymphomaniacs do not really exist.