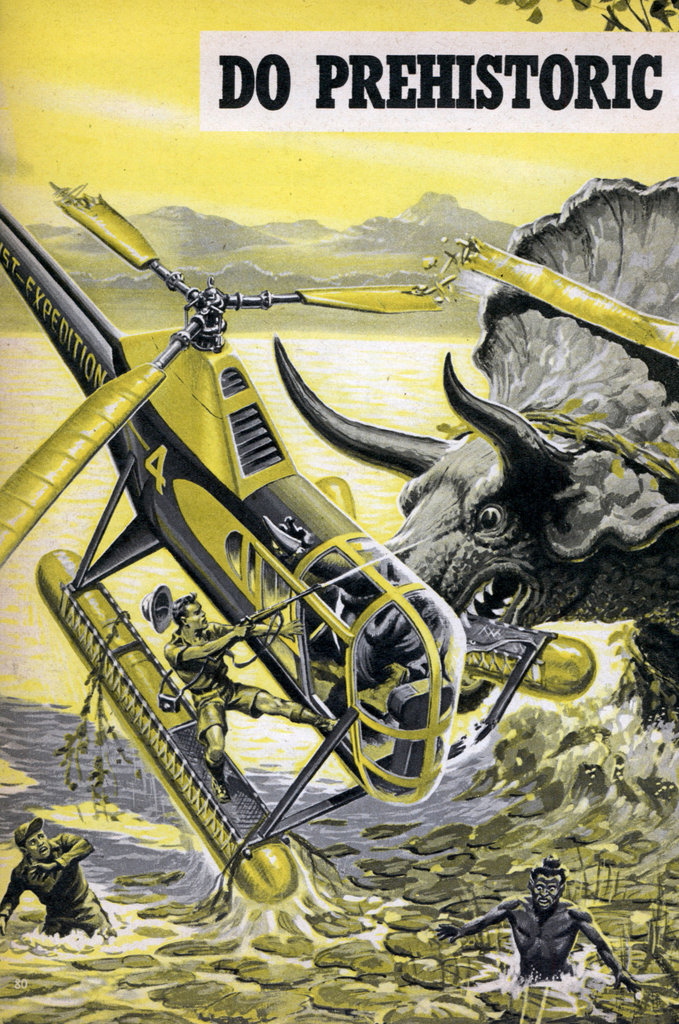 Future explorers may find themselves battling “extinct” creatures which lurk in the remote corners of the world.

By Willy Ley
Author of The Lungfish, the Dodo and the Unicorn*

DINOSAURS may roam the unexplored jungles of Africa!

Native tribes near the Congo River call the creatures Mokele Mbembe. They say they’re enormous and live in caves washed out by the river at sharp turns. Some startled tribesmen have described them as having long necks, small heads and one long tusk. Others have told of a three-horned monster like that shown above, with ferocious teeth and a massive comb. All agree that the creatures kill both humans and elephants. But they never eat the flesh. Farther east in Africa, near Lake Ban-gweolo, the natives tell of a weird animal which they call Chipekwe. Because it kills hippopotamuses, not one hippo can be found in the lake. One tribe claims it hunted and killed a Chipekwe forty years ago. The strongest hunters had to jab it with their spears for days before the animal finally succumbed.

There have been many other reports of strange creatures stilln uncatalogued. They have not been officially described and not yet pinned down with a Latin label. But in all corners of the earth there are people who, will swear to what they have seen.

Of all the unknown animals, the one for which the best evidence has been offered is the apeman of the South American jungles. In 1929, a French geologist, Monsieur de Loys, made a trip into the interior of Venezuela. One day he camped on the banks of the Catatumbo River.

Suddenly, two hairy creatures approached the camp in fury. As they attacked him he fired. One of the attackers fell dead, the other fled. When de Loys examined the body, he found it was not a man as he had thoughtâ€”it was an ape!

He knew he had really discovered something because it had always been thought that there were no apes native to the Western Hemisphere. He propped the body up on a crate and took pictures. It was five feet tall, had 32 teeth, a nose like that of South American monkeys, and no tail at all. Then he cut off the head in order to bring home the skull. But a later accident to the expedition resulted in the loss of the skull although the photos were saved.

So far, this strange apeman of Venezuela has never been found again.

Tales of natives and explorers cannot be discounted. The famous African explorer, Stanley, and other early hunters were told about an animal living in the Congo which had stripes. It sounded like a zebra but since zebras live in open plains, the white men were doubtful. Later the animal was actually “discovered”â€”it was the okapi.

The natives also wore feathers in their headdresses which did not come from any bird known to science. Then this bird was “discovered”â€”the Congo peacock.

And in Liberia, German hunters heard stories about a very large black pig with treacherous teeth. They didn’t believe them until one day a hunter was actually attacked by the animalâ€”the pigmy hippo.

And the fishermen along Norway’s coast have insisted for hundreds of years that two sea monsters exist. One, they say, looks like a long snake. The other has a head like the roots of a big uprooted tree. But the roots are alive and squirmingâ€” with two gigantic eyes. The first monster the fishermen call the Sea Worm and the second, Kraken.

Way back in 1861 the commander of a French man-of-war came back and told of an encounter with an 18-foot octopus of brick-red color. The crew shot cannon balls at it. When they hoisted it aboard, the creature decayed so rapidly it was thrown overboard.

The largest octopus ever taken had a ten-foot body, two long arms about 30-feet long and two short arms about seven feet long. Some varieties of toothed whales like to eat octopusâ€”and they don’t seem to care about the size so long as they can swallow the creatures.

One such whale, on being harpooned, vomited recently-eaten food during its death struggle. In that mess, the men found a piece of octopus tentacle six feet long with a diameter of two feet. The diameter of tentacles of the biggest specimen previously seen had been only eight inches!

On the skin of another toothed whale, fishermen found the mark of a sucking disk two feet in diameter. The tentacle to which it was attached must have been even thicker. The octopus to which tentacles and sucking disks of this size belong, must be of enormous dimensions.

As for “ordinary” sea serpentsâ€”they have been seen on almost all shores at least 200 times. The latest case is that of the SS Santa Clara. This ship literally ran into one in the Gulf Stream at about noon on December 30, 1947. There was lots of blood in the sea and the captain of the vessel thinks his ship may have cut the animal in half.

There are other unrecognized creatures of the sea, too. A turtle-like monster has been reported on Easter Island and in Queensland. It’s called Nuihi on Easter Island and Mohamoha in Queensland but it has never been seen in this country. Yet last winter a mammoth animal tried to climb a Florida sea wall. The next morning, early swimmers found great Nuihi-like tracks in the sand!

Scientists who have studied reports about serpents, have decided that there must definitely exist some unknown sea creature which vaguely answers the descriptions given down through the ages. It seems to come to the surface in warm weather and it is probably not a snake. More likely, it is a warm-blooded mammal like the whale. One of these scientists said, “If you compare the whale to the elephant, the unknown animal should be compared to a giraffe; not much larger than the whale but of a stranger shape.”

A few years ago, fishermen in South America caught a latimeriaâ€”a large fish that was supposed to be extinct 60 million years ago. It caused many to wonder if we have fully explored the fringes of our animal world.

Reliable sources have been hinting to us for generations that there are creatures existing which we have never seen. Will they be dreadful throwbacks to another age or inconceivable monsters of the future?