Mechanix Illustrated
Issue: Nov, 1941
Posted in: Advertisements
Tags: religion
2 Comments on DO WE HAVE TO DIE? (Nov, 1941)

Yes, we do. The Institute of Mentalphysics is still around. 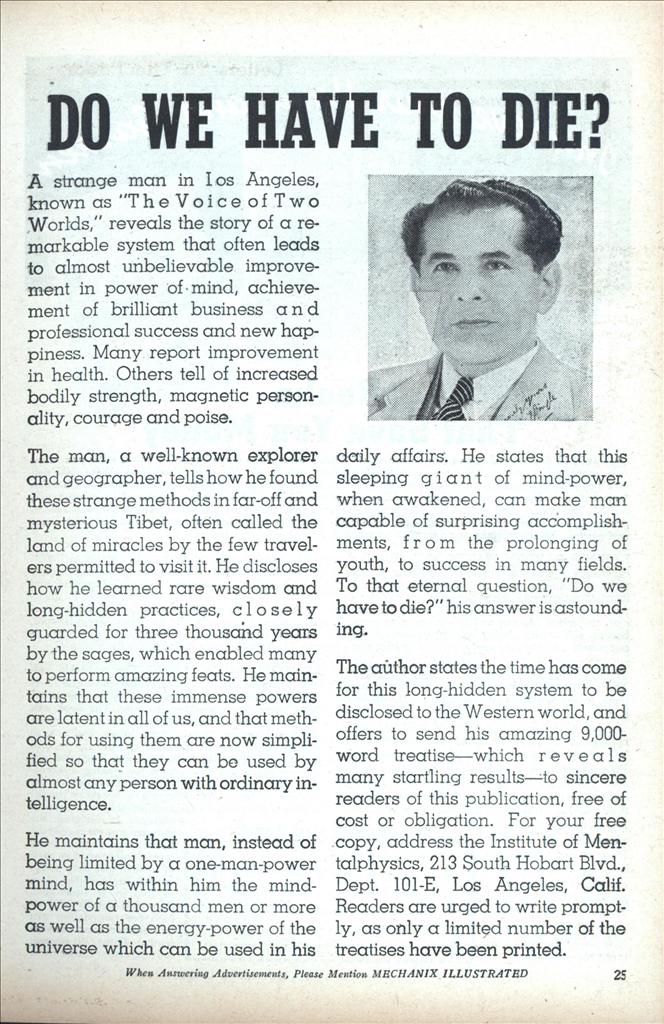 DO WE HAVE TO DIE?

A strange man in Los Angeles, known as “The Voice of Two Worlds,” reveals the story of a remarkable system that often leads to almost unbelievable improvement in power of mind, achievement of brilliant business and professional success and new happiness. Many report improvement in health. Others tell of increased bodily strength, magnetic personality, courage and poise.

The man, a well-known explorer and geographer, tells how he found these strange methods in far-off and mysterious Tibet, often called the land of miracles by the few travelers permitted to visit it. He discloses how he learned rare wisdom and long-hidden practices, closely guarded for three thousand years by the sages, which enabled many to perform amazing feats. He maintains that these immense powers are latent in all of us, and that methods for using them are now simplified so that they can be used by almost any person with ordinary intelligence.

He maintains that man, instead of being limited by a one-man-power mind, has within him the mind-power of a thousand men or more as well as the energy-power of the universe which can be used in his daily affairs. He states that this sleeping giant of mind-power, when awakened, can make man capable of surprising accomplishments, from the prolonging of youth, to success in many fields. To that eternal question, “Do we have to die?” his answer is astounding.

The author states the time has come for this long-hidden system to be disclosed to the Western world, and offers to send his amazing 9,000-word treatise—which reveals many startling results—to sincere readers of this publication, free of cost or obligation. For your free copy, address the Institute of Mentalphysics, 213 South Hobart Blvd., Dept. 101-E, Los Angeles, Calif. Readers are urged to write promptly, as only a limited number of the treatises have been printed.