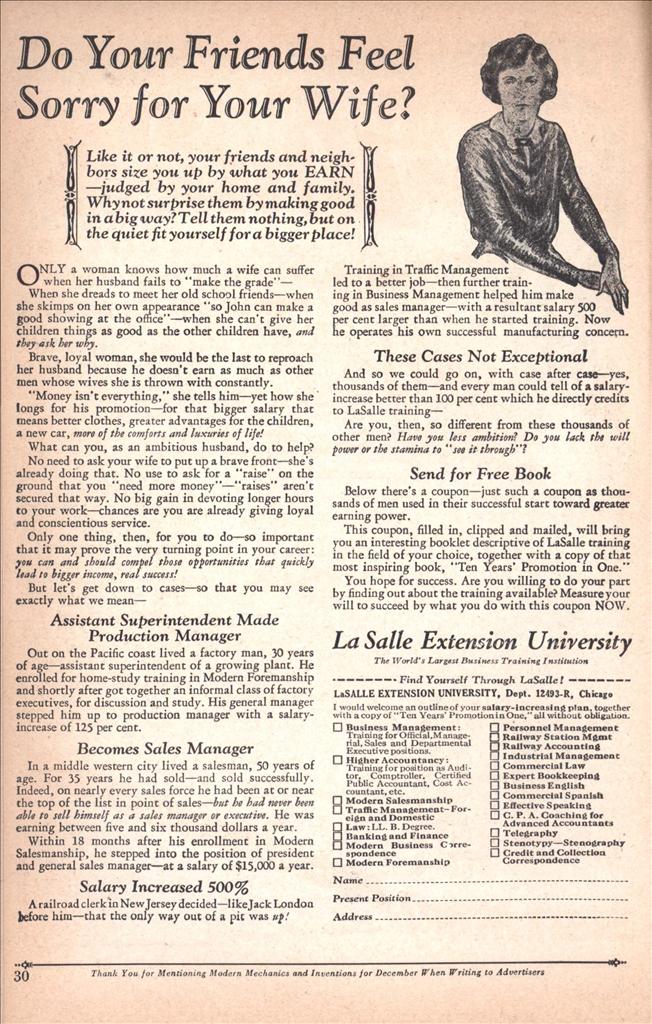 Do Your Friends Feel Sorry for Your Wife?

Like it or not, your friends and neighbors size you up by what you EARN —judged by your home and family. Why not surprise them by making good in a big way? Tell them nothing, but on the quiet fit yourself for a bigger place!

ONLY a woman knows how much a wife can suffer when her husband fails to “make the grade”— When she dreads to meet her old school friends—when she skimps on her own appearance “so John can make a good showing at the office”—when she can’t give her children things as good as the other children have, and they ask her why.

Brave, loyal woman, she would be the last to reproach her husband because he doesn’t earn as much as other men whose wives she is thrown with constantly.

“Money isn’t everything,” she tells him—yet how she longs for his promotion—for that bigger salary that means better clothes, greater advantages for the children, a new car, more of the comforts and luxuries of life!

What can you, as an ambitious husband, do to help?

No need to ask your wife to put up a brave front—she’s already doing that. No use to ask for a “raise” on the ground that you “need more money”—”raises” aren’t secured that way. No big gain in devoting longer hours to your work—chances are you are already giving loyal and conscientious service.

Only one thing, then, for you to do—so important that it may prove the very turning point in your career: you can and should compel those opportunities that quickly lead to bigger income, real success!

But let’s get down to cases-—so that you may see exactly what we mean— Assistant Superintendent Made Production Manager Out on the Pacific coast lived a factory man, 30 years of age—assistant superintendent of a growing plant. He enrolled for home-study training in Modern Foremanship and shortly after got together an informal class of factory executives, for discussion and study. His general manager stepped him up to production manager with a salary-increase of 125 per cent.

Becomes Sales Manager In a middle western city lived a salesman, 50 years of age. For 35 years he had sold—and sold successfully. Indeed, on nearly every sales force he had been at or near the top of the list in point of sales—but he had never been able to sell himself as a sales manager or executive. He was earning between five and six thousand dollars a year.

Within 18 months after his enrollment in Modern Salesmanship, he stepped into the position of president and general sales manager—at a salary of $15,000 a year.

Salary Increased 500% A railroad clerk in New Jersey decided—like Jack London before him—that the only way out of a pit was up: Training in Traffic Management led to a better job—then further training in Business Management helped him make good as sales manager—with a resultant salary 500 per cent larger than when he started training. Now he operates his own successful manufacturing concern.

These Cases Not Exceptional And so we could go on, with case after case—yes, thousands of them—and every man could tell of a salary-increase better than 100 per cent which he directly credits to LaSalle training— Are you, then, so different from these thousands of other men? Have you less ambition*. Do you lack the wilt power or the stamina to “see it through'”!

Send for Free Book Below there’s a coupon—just such a coupon as thousands of men used in their successful start toward greater earning power.

This coupon, filled in, clipped and mailed, will bring you an interesting booklet descriptive of LaSalle training in the field of your choice, together with a copy of that most inspiring book, “Ten Years’ Promotion in One.”

You hope for success. Are you willing to do your part by finding out about the training available? Measure your will to succeed by what you do with this coupon NOW.