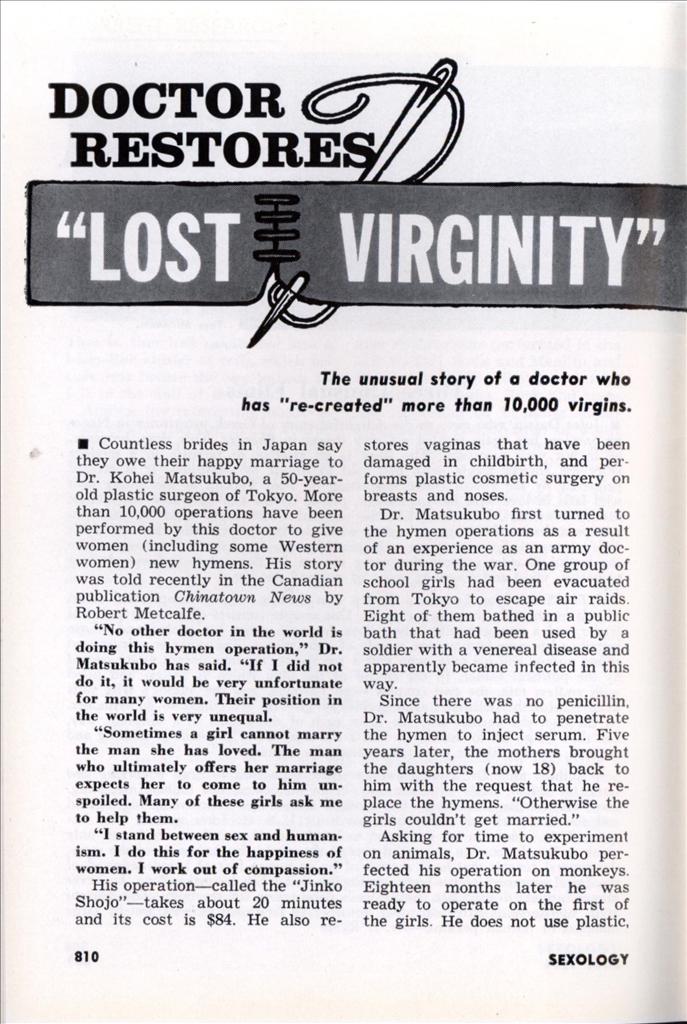 “No other doctor in the world is doing this hymen operation,” Dr. Matsukubo has said. “If I did not do it, it would be very unfortunate for many women. Their position in the world is very unequal.

“Sometimes a girl cannot marry the man she has loved. The man who ultimately offers her marriage expects her to come to him unspoiled. Many of these girls ask me to help them.

“I stand between sex and humanism. I do this for the happiness of women. I work out of compassion.”

His operation—called the “Jinko Shojo”—takes about 20 minutes and its cost is $84. He also re- stores vaginas that have been damaged in childbirth, and performs plastic cosmetic surgery on breasts and noses.

Dr. Matsukubo first turned to the hymen operations as a result of an experience as an army doctor during the war. One group of school girls had been evacuated from Tokyo to escape air raids. Eight of them bathed in a public bath that had been used by a soldier with a venereal disease and apparently became infected in this way.

Since there was no penicillin, Dr. Matsukubo had to penetrate the hymen to inject serum. Five years later, the mothers brought the daughters (now 18) back to him with the request that he replace the hymens. “Otherwise the girls couldn’t get married.”

Asking for time to experiment on animals, Dr. Matsukubo perfected his operation on monkeys. Eighteen months later he was ready to operate on the first of the girls. He does not use plastic, but does careful repair work with thread and needle.

Some of his patients are prostitutes from the Ginza district, seeking to make a fresh start. Most operations are sought by young girls. Some women travel from Southeast Asia for the operation.

Dr. Matsukubo is no fly-by-night quack. More than 100 doctors showed up when he gave a party to celebrate his 10,000th “Jinko Shojo” operation.

“Some said that 10,000 husbands would be waiting in the next world to take me to task for the deception,” said Dr. Matsukubo. “But I think I’m doing the right thing.”

Report From the Future

The following items are taken from FORECAST: 1964, annual Christmas-New Year’s greetings sent out to thousands of friends, associates, and scientific fellow-workers by Hugo Gernsback, Editor and Publisher of Sexology. Mr. Gernsback, who has been predicting the scientific future for more than 55 years, was described in a recent Life magazine article as “a man of remarkable energy who raps out forecasts of future scientific wonders with the rapidity of a disintegrator gun. . . . His list of successful scientific prophecies is almost endless.”

THE WHITE NEGRO (2084 A.D.) In 1972, chemi-genetist scientists developed a method to whiten the skin color for all who desired it.

As long ago as 1925, Sir Joseph Barcroft, C.B.E., M.A., B.Sc., M.D., F.R.S. (1872-1947) wrote that Negroid skin pigment was caused “by Melanin, closely related to two remarkable chemical substances: the hormone adrenalin and lyrosinate.” By 1976 two Rockefeller Fund scientists had isolated the Melanin-carrier genes of the Negro.

Next they discovered the enzyme Menalbin, which causes albinism, really the absence of color pigmentation. (There always were white albino Negroes.) By altering the genes which manufacture this enzyme in the body at birth, chemi-genetists were able to control the amount of melanin produced in the body and thus change skin color. Within 2 generations the offspring of colored people in the U.S. became white, thereby removing a basic source of friction.

SEX AT WILL (2124 A.D.) what will it be? Boy or girl? This question has plagued humanity since antiquity. It remained for Sir Austin W. Gerard, Nobel Prize winner, to solve the problem in 2114.

The basis of future sex always occurs at the moment of conception. Since the egg has the X chromosome and the sperm can have either X or Y chromosome, we must control the wanted male chromosome.

To do this, one must take the proper hormone 24 hours before mating.