I’ve always wondered why my knee joint’s weren’t as supple as I’d have liked. I always I assumed that it was because I’m lazy and shiftless, but apparently it’s just because I’m a Jew.

Damn you gentiles with your supple knees! 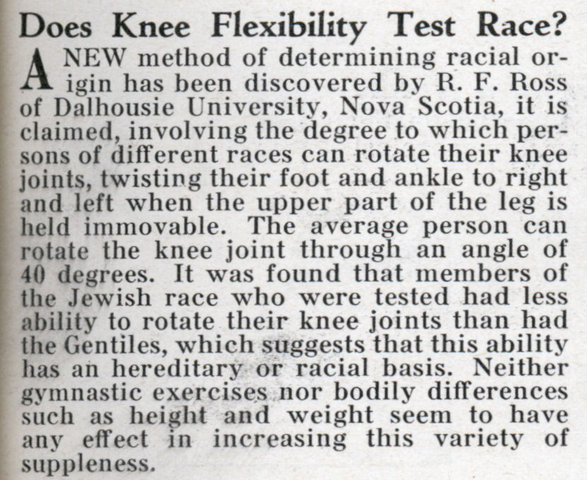 Does Knee Flexibility Test Race?
A NEW method of determining racial origin has been discovered by R. F. Ross of Dalhousie University, Nova Scotia, it is claimed, involving the degree to which persons of different races can rotate their knee joints, twisting their foot and ankle to right and left when the upper part of the leg is held immovable. The average person can rotate the knee joint through an angle of 40 degrees. It was found that members of the Jewish race who were tested had less ability to rotate their knee joints than had the Gentiles, which suggests that this ability has an hereditary or racial basis. Neither gymnastic exercises nor bodily differences such as height and weight seem to have any effect in increasing this variety of suppleness.