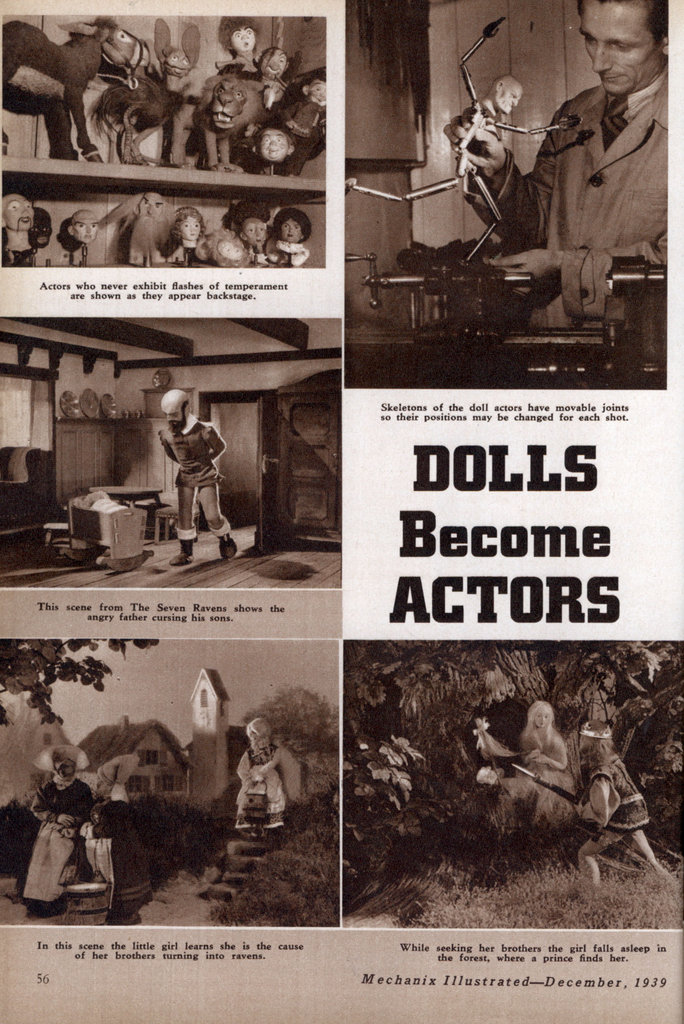 DOLLS may replace drawings as actors in animated cartoon movies if the idea developed by three Italian brothers proves successful. The present way of making such films, the best example of which is Walt Disney’s Snow White And The Seven Dwarfs, is to shoot thousands of drawings separately and then piece them together so that the subjects appear to move when projected.

To remove the need for a drawing of each movement of a character, the brothers decided to use dolls in miniature settings. Filming procedure is the same but the cost is less. By this method they have taken Jakob Ludwig Karl Grimm’s old fairy tale, The Seven Ravens, and turned it into an interesting movie.

In the picture, several scenes of which are shown in accompanying photos, the story tells of an old man who had seven sons but no daughters. At last a girl was born, but she was so small and delicate she had to be christened at home. Her brothers were sent for water to baptize their newborn sister, but in their hurry they dropped the jug. Whereupon their father cursed them, saying, “May you all turn into ravens!”

Years later the daughter learns she is the cause of her brothers’ fate and that they live in the Glass Mountain. Seeking them, she grows tired and falls asleep in the forest A prince finds her, and their marriage delights his people, but her silence baffles him.

She is tried as a witch when her own sons turn into ravens and is condemned to die at the stake, but she remains silent, for to free her brothers she cannot speak a word for seven years. Previously the princess had taken care of an old blind man and his daughter. They demand her release, and at that moment her seven-year spell is over. Her brothers, restored to human form, rescue her and bring back her sons.