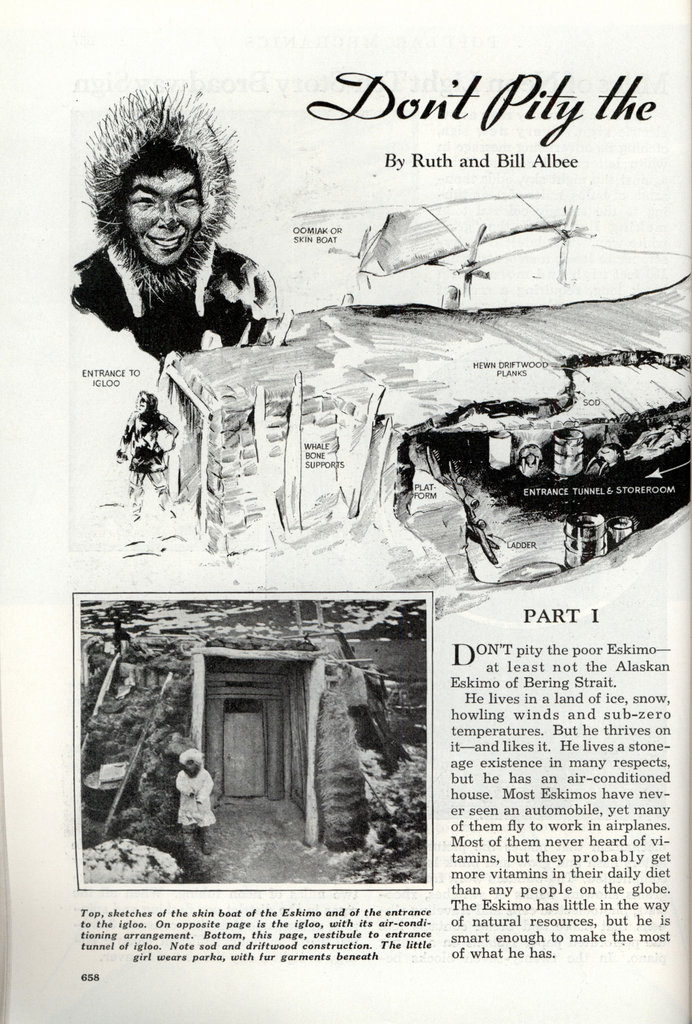 DON’T pity the poor Eskimo â€” at least not the Alaskan Eskimo of Bering Strait.

He lives in a land of ice, snow, howling winds and sub-zero temperatures. But he thrives on itâ€”and likes it. He lives a stone-age existence in many respects, but he has an air-conditioned house. Most Eskimos have never seen an automobile, yet many of them fly to work in airplanes. Most of them never heard of vitamins, but they probably get more vitamins in their daily diet than any people on the globe. The Eskimo has little in the way of natural resources, but he is smart enough to make the most of what he has.

Aside from sod dug from the tundra swamps, driftwood picked up on the beach, and a few articles secured from traders, the Eskimo has no raw materials except those he secures by hunting. Yet from these materials he fabricates dwellings, clothing, boats and weapons. He makes them in the same pattern that his ancestors have used through the centuries because they are better suited to his needs and to the rigorous climate than any that civilized man has been able to devise.

Nevertheless, he is quick to adopt the latest products of civilization if and when they have proved their superiority to his own devices and methods. Thus, we found him hunting in the same kind of oomiak or skin boat that his forefathers usedâ€”but propelled by an outboard motor. In the boat along with stone-age harpoons, we saw rifles, binoculars, a compass, and a primus stove. These modern implements make him a more efficient hunter. And he must be an efficient hunter to survive. The Kingekmiu tribe, among whom we lived for some time, dwell at Cape Prince of Wales, Alaska, westernmost point of the North American mainland, just fifty-six miles across Bering Strait from Siberia. Contrary to general belief, these Eskimos do not live in ice igloos. Virtually the only Eskimos who do are those who live where there is no driftwood.

The typical Cape Prince of Wales igloo is built half above ground level and half below and banked with dirt to minimize wind resistance. Its walls and roof of driftwood and whale ribs are covered with peat sod for insulation. Old walrus hides shed water from the roof. But if water seeps through, the sod underneath absorbs it like a blotter.

The igloo consists of one low-ceilinged room about twelve feet square and an entrance tunnel from sixteen to twenty feet long and half as wide. Light is admitted through a skylight of translucent strips of walrus intestine sewed together with sinew. The tunnel provides storage space for food and household effects. It is also a part of the air-conditioning system. The tunnel floor is lower than that of the living room and acts as a sump allowing the cold air and the carbon-monoxide gas to drain from the living quarters. The warm air inside rises and forces the cold air down and out. A small ventilating tube in the ceiling can be opened to admit fresh air. Thus the fresh air enters at the point where the inside air is warmest, and is tempered before it descends to the floor level where the occupants work and sleep. Like the igloo, the Eskimo parka is an air-conditioning device. Its primary function is to protect the wearer against one of the most dreaded of Arctic disastersâ€”frostbitten lungs. Essentially, the parka is a hooded shirt worn outside the trousers and fitting loosely around the chest and neck. It is usually made of reindeer or squirrel fur. The hood has a ruff of long fur to shield the face and eyes from driven snow. This ruff is usually of wolverine fur which does not “freeze up.” That is, frost and ice collecting on the hairs do not stick, but can be brushed off easily.

Cold air enters the parka around the loose bottom of the garment, is warmed by contact with the body, rises past the loose-fitting neck, and passes out through the long-haired ruff in front of the wearer’s mouth and nose. There, the cold air being drawn into the lungs is mixed with the heated or “conditioned” air, escaping through the parka top.

In developing the oomiak, these Eskimos faced the problem of designing a boat for hunting walrus and whales in the stormy waters of Bering Strait with its crushing ice floes and treacherous currents. Since whales often weigh as much as fifty tons, and walrus from 2,000 to 3,000 pounds each, they must be hunted by large crews. The boat must be capable of transporting eight to ten men, surviving heavy weather and bringing home the catch. To solve this problem, the Eskimo had only driftwood and hides.

The oomiak is dory-shaped for seaworthiness, and from twenty-five to forty feet long. The frame is of light driftwood spruce, each piece carved to shape and the pieces lashed together with rawhide thongs. Strength is obtained by several single-piece longitudinal members lashed to the ribs. Sturdy stem and stern pieces are carved from driftwood stumps, making use of the natural curve of the stump and roots. These are dovetailed to the keel.

Over the frame a covering of wet, split walrus hide is lashed, with wet rawhide lacings. Three or four of these hides are sewn together with sinew in invisible stitches to form waterproof seams. As the skins and lacings dry they contract, stretching the covering to drumhead tightness.

The flexible construction of the oomiak makes it extremely resilient so that it can absorb shocks that would crush most boats. Each oomiak is equipped with oars, paddles, mast, and sail, and usually an outboard motor. The oars are used for long pulls, should the motor fail; the paddles for fast work amid ice floes; the sail to take advantage of favorable winds. Caught far out at sea, with a whale in tow, the crew may utilize motor, sail and oars simultaneously. We found no record of any oomiak crew at Cape Prince of Wales having been lost at sea. Surely this is a tribute to the oomiak as well as to the skill of the men who designed it centuries ago and the men who build and sail it today. The U. S. Coast Guard cutters patrolling Bering Sea waters usually carry an oomiak to reach places where no other boat could venture with safety.

Although the Eskimo has adopted the rifle, he still finds his stone-age harpoon indispensable. For instance, a walrus, shot dead in the water, sinks instantly, and is lost to the hunter. But if the hunter can get a harpoon into the animal, he has it hooked like a fish. The Eskimo harpoon is essentially a sharp-bladed projectile attached to a rawhide line that can be forced into the animal’s body. Once it has penetrated the tough hide, the harpoon head comes loose from the shaft and turns with a toggle-pin action, anchoring the head and the line firmly within the carcass. The head is attached to the line by a slipknot that can be released to free the line without removing the harpoon head. The long heavy shaft serves as a handle for the projectile and as a means of propelling it. As soon as the harpoon head is driven home, the handle comes loose and floats on the water. A running ring, sliding along the harpoon line, prevents the handle from drifting away.

The entire harpoon assembly, except for the steel blade of the head, is made from native materials; the head from walrus-tusk ivory, the socket from bone, the shaft from driftwood, the lashings from whale baleen and the line from seal rawhide. In fashioning the harpoon, the Eskimo shows expert workmanship and a thorough understanding of ballistics. Again, he displays his ability to analyze a technical problem and find the right answer.

Away back in the dim past, he found the right answer to the problem of daily diet: eat all the digestible parts of the animals one kills. Livers, brains and hearts, for instance, contain elements which the human body needs. Most of us get too little of these elements. But the Eskimo’s diet is rich in them. Also, the Eskimo consumes a lot of seal oil. And seal oil is closely akin to cod-liver oil. It took years of propaganda to convince the so-called civilized peoples that cod-liver oil was good for them. The Eskimo knew it long ago.

He didn’t know about the airplane until recently. But he was quick to see its advantages. Every spring, Eskimo men from the Diomede Islands in Bering Straits, have gone to Teller and Nome to work on the docks and at placer mines. Until the airplane came, they had to wait until the ice broke up and make the trip by oomiak. Last spring they chartered a plane and flew to work, making the trip in hours instead of days and gaining an extra month or six weeks of employment.

So don’t pity the poor Eskimo! Living among them, we admired their wisdom in clinging to the ways of their ancestors when those ways are best. We admired their readiness to adopt white man’s ways of proved value. We marveled at their ability to live happily in an environment in which few white men can surviveâ€”unless they adopt some of the stone-age ways of the not-so-dumb Eskimo.