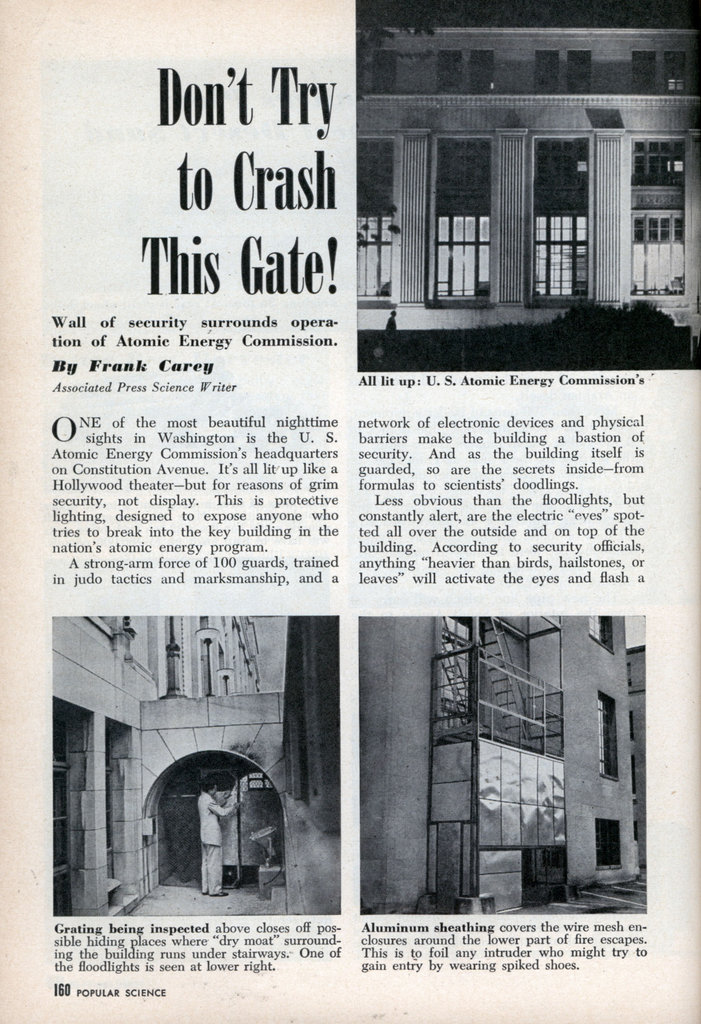 Don’t Try to Crash This Gate!

ONE of the most beautiful nighttime sights in Washington is the U. S. Atomic Energy Commission’s headquarters on Constitution Avenue. It’s all lit up like a Hollywood theaterâ€”but for reasons of grim security, not display. This is protective lighting, designed to expose anyone who tries to break into the key building in the nation’s atomic energy program.

A strong-arm force of 100 guards, trained in judo tactics and marksmanship, and a network of electronic devices and physical barriers make the building a bastion of security. And as the building itself is guarded, so are the secrets insideâ€”from formulas to scientists’ doodlings.

Less obvious than the floodlights, but constantly alert, are the electric “eves” spotted all over the outside and on top of the building. According to security officials, anything “heavier than birds, hailstones, or leaves” will activate the eyes and flash a signal on a centrally located enunciator board. Any tampering with the electrically protected windows will flash a similar alarm. In case of a break, it is estimated that guards could reach the farthest comer of the building’s attic in less than two minutes.

Even if you are an employee of AEC, and want to get into the building at night on official business, you find it no cinch. You show your identification pass to a guard on the other side of the glass panel of a door that is locked and hooked up with an electrical alarm system. You’re okay, but the door guard, a cautious soul, looks at a semicircular mirror that gives him a six-angle view of the areas outside. If he doesn’t spy a gang of potential enemy agents lurking

offside, he signals another guard who momentarily switches off the alarm system so that the door can be opened. And then you finally enter, to be faced by a couple of stalwarts ready to draw guns from their hip holstersâ€”just in case you try anything.

When Bryan F. La Plante, a veteran of Army counterintelligence, took charge of the security system, he decided to start at the bottom. Right off he found that a man could gain entrance to AEC high-command offices by crawling through a heat tunnel linking the building with a central heating plant. When health authorities reported that a man could live in the tunnel for almost half an hour despite the heat radiating from the pipes, a concrete wall was built around the pipes.

Next La Plante recommended that seven of the nine entrances to the building be locked at all times, leaving only a single front and rear entrance open. The barred doors can be opened only from the inside by a five-door-type crash bar.

Now for legitimate entry into the building. Based on the system used at wartime installations of the Army’s Manhattan Districtâ€”makers of the A-bombâ€”regular employees have to exchange passes for badges I at the reception desk. Both have a photograph of the “cleared” person, and these are carefully checked before a person receives his identification badge, which must be worn at all times within the building. When leaving the building, the employee turns in his badge and gets his pass back. As an extra precaution, the color scheme of all badges and passes is changed periodically.

Visitors must have an escort while going between offices and the reception desk, and even if they go out for a drink of water from a corridor bubbler. Exceptions are certain “preferred” list visitors. These include cabinet officers, congressmen, and scientists who have frequent business with the commission or its staff. They receive a special identification badge, but only after a thorough security investigation. And everyone, including David E. Lilienthal, Chairman of the Atomic Energy Commission, must “log in” at the reception desk. Only such clearance is the “open sesame” to AEC’s inner sanctums.

But even with everyone in the building checked and double-checked, the security staff doesn’t relax its vigilance. Persons walking along corridors are frequently challenged and the photograph on their badges compared with the original. The prankster who pasted a picture of Hitler over his own identification photo and gained entry to a government building during the war, would soon get the bum’s rush at AEC.

Some of our top scientists are doodlers from way back. “So, after a pow-wow in one of the conference roomsâ€”soundproofed against eavesdroppersâ€”pads that have been used for making notes are carefully inspected. The security boys remove not only the sheets that have doodles or notes that may be of the slightest use to prying eyes, but also all sheets that have the slightest impression of a pencil mark.

Guards check every safe once an hour all through the night. If one is found open, the person responsible, whose name and telephone number is pasted inside, gets a call. No matter what time of the night, he is told to hot foot it down and check the contents in case something is missing. And in the morning the culprit is on the carpet.

And although the building is fireproof, safes are so constructed that in case of a fire, they could crash through two floors without cracking open, holding their secrets intact.

Nothing “confidential” or higher is discussed over the telephone. And anyone succeeding in tapping a phone line is likely to hear a conversation interspersed with code words in a sort of glorified double-talk. Information is departmentalizedâ€”that is, employees are allowed to know all that is necessary for their particular job, but NO more.

This, of course, isn’t a complete blueprint of the safeguards surrounding our atomic energy program. For, as La Plante says, “There’s much more to maintaining security, but we can’t tell all our trade secrets.”