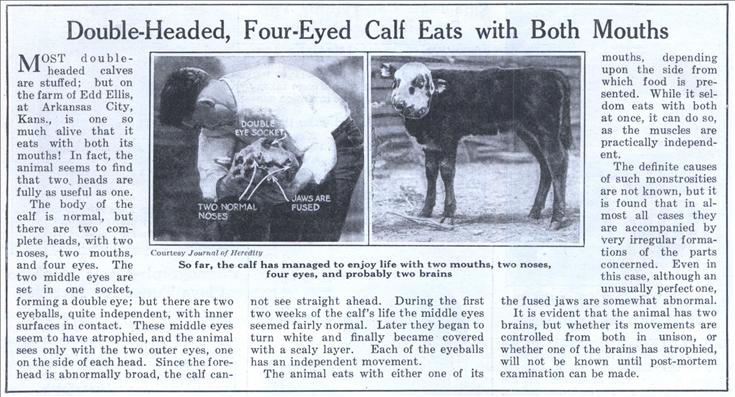 MOST double-headed calves are stuffed; but on the farm of Edd Ellis, at Arkansas City, Kans., is one so much alive that it eats with both its mouths! In fact, the animal seems to find that two, heads are fully as useful as one. The body of the calf is normal, but there are two complete heads, with two noses, two mouths, and four eyes. The two middle eyes are set in one socket, forming a double eye; but there are two eyeballs, quite independent, with inner surfaces in contact. These middle eyes seem to have atrophied, and the animal sees only with the two outer eyes, one on the side of each head. Since the forehead is abnormally broad, the calf can- not see straight ahead. During the first two weeks of the calf’s life the middle eyes seemed fairly normal. Later they began to turn white and finally became covered with a scaly layer. Each of the eyeballs has an independent movement.

The animal eats with either one of its mouths, depending upon the side from which food is presented. While it seldom eats with both at once, it can do so, as the muscles are practically independent.

The definite causes of such monstrosities are not known, but it is found that in almost all cases they are accompanied by very irregular formations of the parts concerned. Even in this case, although an unusually perfect one, the fused jaws are somewhat abnormal. It is evident that the animal has two brains, but whether its movements are controlled from both in unison, or whether one of the brains has atrophied, will not be known until post-mortem examination can be made.