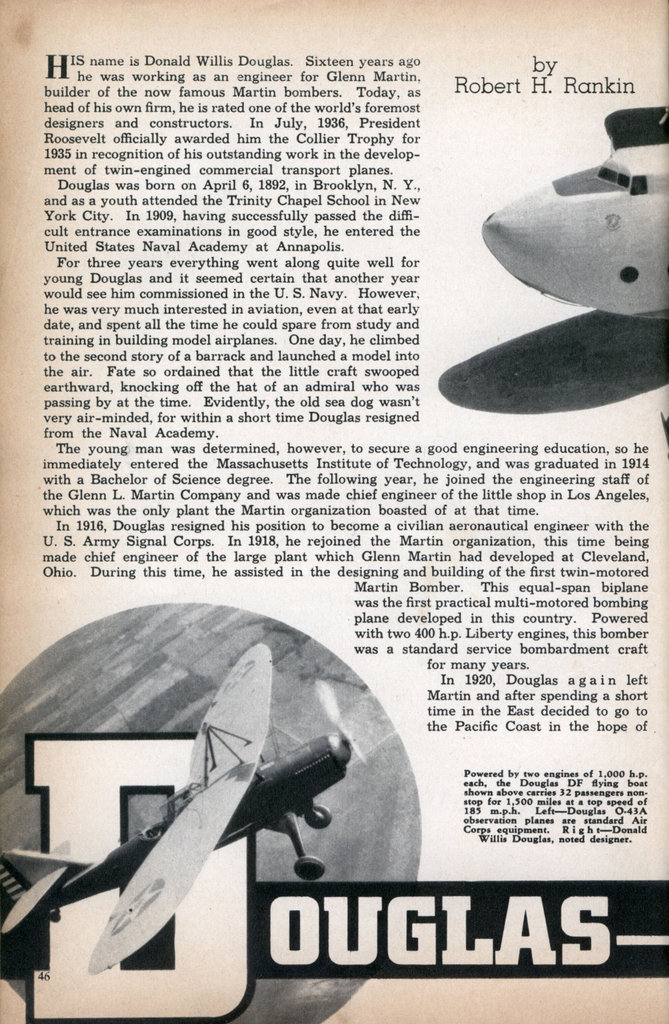 HIS name is Donald Willis Douglas. Sixteen years ago he was working as an engineer for Glenn Martin, builder of the now famous Martin bombers. Today, as head of his own firm, he is rated one of the world’s foremost designers and constructors. In July, 1936, President Roosevelt officially awarded him the Collier Trophy for 1935 in recognition of his outstanding work in the development of twin-engined commercial transport planes.

Douglas was born on April 6, 1892, in Brooklyn, N. Y., and as a youth attended the Trinity Chapel School in New York City. In 1909, having successfully passed the difficult entrance examinations in good style, he entered the United States Naval Academy at Annapolis.

For three years everything went along quite well for young Douglas and it seemed certain that another year would see him commissioned in the U. S. Navy. However, he was very much interested in aviation, even at that early-date, and spent all the time he could spare from study and training in building model airplanes. One day, he climbed to the second story of a barrack and launched a model into the air. Fate so ordained that the little craft swooped earthward, knocking off the hat of an admiral who was ( passing by at the time. Evidently, the old sea dog wasn’t very air-minded, for within a short time Douglas resigned from the Naval Academy.

The young man was determined, however, to secure a good engineering education, so he immediately entered the Massachusetts Institute of Technology, and was graduated in 1914 with a Bachelor of Science degree. The following year, he joined the engineering staff of the Glenn L. Martin Company and was made chief engineer of the little shop in Los Angeles, which was the only plant the Martin organization boasted of at that time.

In 1916, Douglas resigned his position to become a civilian aeronautical engineer with the U. S. Army Signal Corps. In 1918, he rejoined the Martin organization, this time being made chief engineer of the large plant which Glenn Martin had developed at Cleveland, Ohio. During this time, he assisted in the designing and building of the first twin-motored Martin Bomber. This equal-span biplane was the first practical multi-motored bombing plane developed in this country. Powered with two 400 h.p. Liberty engines, this bomber was a standard service bombardment craft for many years.

In 1920, Douglas again left Martin and after spending a short time in the East decided to go to the Pacific Coast in the hope of finding enough capital to enable him to establish his own aircraft factory.

He arrived in Los Angeles with limited funds, but within a comparatively short time was able to interest a Mr. David Davis in his plans. Believing that the day of commercial aviation was dawning. Douglas was of the opinion that if the American public was stirred by a non-stop transcontinental flight, commercial air transportation would receive a more ready welcome. The Davis-Douglas Company was formed and a small shop was leased from the Goodyear concern. In this little plant, the first Douglas ship, the Cloudster, was built. Designed especially for the transcontinental hop, this Liberty powered craft was the first American-built airplane which could get off the ground with a useful load equal to its own weight.

On its attempted non-stop flight across the country, the Cloudster was forced down at El Paso, Texas, by engine failure. Mr. Davis withdrew from the concern and the Davis-Douglas Company passed out of existence.

In the meantime, Douglas attracted the favorable attention of several influential men and in 1921, when the Navy announced an open competition for torpedo plane designs, he was able to raise some $15,000. With this sum he set to work, and designed and built the craft which won the competition.

This marked the real beginning of the present Douglas organization, for the Navy immediately ordered two of the ships. The following year eighteen more were delivered to the Navy.

As a result of the success of the Douglas torpedo plane, the “D. T.,” an improved model was brought out. This twin-float, Liberty -powered biplane was delivered to the Navy in quantity and many of them were also sold to the governments of Peru and Norway.

Following this, the famous “D. W. C’s.” (Douglas World Cruisers) were designed and built for the U. S. Army’s ‘Round the World’ flight. Designed to be used as either land or sea craft, two of the original flight of four machines completed the jaunt around the globe, making the trip in 175 days. This flight brought the first wide spread fame to Douglas ships, and rightly so, for they were the first airplanes to ever circle the globe.

After this, the 0-2, forerunner of the modern Douglas observation ships, was brought out. This craft differed from preceding Douglas designs in that radiator was streamlined into the fuselage lines instead of being left out in air stream-It is interesting to note at this point that Douglas has built more than 800 machines of the observation type. In addition to being standard service equipment with the U. S. Army Air Corps, they are standard with the Chinese National Air Force.

While reviewing the various craft built by Douglas, mention should be made of the M-l. This Liberty-12-powered mail plane could carry 1000 pounds of mail, and was the standard plane of the Post Office Department. These machines replaced the veteran De Havilands and set a record of thousands of miles of flying over the various air mail routes of the nation before they were honorably retired from service.

The C-l was an efficient Liberty-powered-bi-plane which was used as a military transport.

The T2D, built for the Navy, was fitted with air-cooled radial engines. It was available with either twin floats or wheels and carried a torpedo slung beneath the fuselage.

The PD-1 was the first flying boat ever built by Douglas and was used as a patrol ship by the Navy. Like the T2D, it was equipped with air-cooled engines.

The BT, a long nosed, equal span job, proved to be an outstanding basic training plane and was built in quantity for the Army.

The T2D-1, an improved version of the T2D, was also available with either floats or wheels and featured a twin rudder tail group.

In 1930, Douglas entered the bombardment field with the production of the B-7. An unconventional, gull-wing monoplane, this craft was a distinct advance over the bombing craft then in service use. The machine was powered with two 600 h.p. Curtiss Conqueror liquid-cooled engines mounted on either side of the fuselage in well streamlined nacelles. The landing gear retracted into the rear of these nacelles. The original machines of this type had a high speed of some 158 m.p.h. The later models, however, showed speeds of well over 185 m.p.h.

Two later military developments were the 0-38 and the 0-43. The 0-38 is an equal-span biplane powered with an air-cooled engine and has a speed of over 150 m.p.h. This craft is used by many of the National Guard observation squadrons. The 0-43 is a parasol monoplane type fitted with a liquid-cooled motor and is characterized by a rather long fuselage. Both of these types have been delivered in quantity to the Army and National Guard air squadrons. The 0-46A, equipped with a radial air-cooled engine is the latest of the Douglas observation type planes.

One of the most interesting of the many Douglas military planes is the Douglas bomber. This big, twin-engined monoplane resembles the Martin bomber to some extent. It is powered with 800 h. p. air-cooled engines and 100 have been ordered for the Air Service.

Although Douglas had made his name quite well known to the world of aeronautics, he did not enter the commercial field until 1932. The reason was that up until 1929 Ford, Fokker, Boeing and Curtiss had a monopoly on the air transport market and it was practically impossible for any other manufacturer to find a buyer for transport planes. However, the commercial transport market became saturated during the period from 1929 to 1931, because few of the air line operators were in a position to replace their flying equipment.

Early in 1932, Transcontinental and Western Air Express decided to purchase some new transports and invitations for bids were extended to various aircraft builders. At once, there was a turmoil in the commercial field, with practically all of the major aircraft manufacturers striving to win the contract. At this point, Donald Douglas stepped into the picture with his DC-1. This ship readily won the TWA contract and Douglas was well launched in the commercial field.

The DC-l’s were the result of careful experimentation and sound engineering. Low-wing, twin-engined monoplanes of all metal construction, these transports with their retracting landing gear were soon a familiar sight at all of the larger airports.

The DC-1 was soon improved and appeared as the DC-2. This model is one of the most efficient and popular transports ever built and it is quite probable that no other commercial airplane ever sold so quickly and so well. In addition to the fifty-eight which were sold to TWA, American Airlines, Eastern Air Transport, and Pan American Airways, thirty-four were delivered to Royal Dutch Air Mail Lines, Swissair, China National, Japan Air Transport, Spanish Air Mail, and Avio Linee Italiane S. A.

In 1936, the DC-2 was developed into the DST, 14 passenger sleeper plane, and the DC-3, a day plane with reclinable seats for 24 passengers.

The DC-4, a four-engined transport is scheduled for production during 1937.

One of the most interesting of the many Douglas developments is the Dolphin. This eight-place monoplane amphibian, powered with two 450 h. p. air-cooled engines, has a high speed of 160 m.p.h.

Designed primarily for the commercial market, this machine found but few sales and for a time it looked as though the plane would be a washout, as far as sales were concerned. However, the Army, in searching for a small amphibian transport, bought one and gave it a series of extremely hard tests. Entirely satisfied with the Dolphin’s performance, the Army ordered twenty-eight. In addition to this, the Navy took delivery on eight and the Coast Guard purchased thirteen. These government sales, together with numerous sales to private individuals, made the Dolphin a very profitable model to build.

One of the latest Douglas achievements is a giant DF twin-engine flying boat. Designed for trans-oceanic flying, this ship can fly non-stop with thirty-two passengers for 1500 miles. With twelve passengers, it has a non-stop range of 3300 miles. Fitted with two 1000 h. p. engines, the boat has a high speed of 185 m.p.h. and a cruising speed of 167 m.p.h. Among the interesting features of the craft are the retractable wing floats. These hydraulically operated floats retract inward and upward into the under side of the wing.

Douglas, throughout his career as an airplane designer and builder, has been a most careful experimenter. Although he has produced several hundred planes, representing in all more than a hundred different stages of development, he has kept his designs within a few well defined types.

Since 1921, when he first started in the airplane manufacturing business, Douglas has built around 1,500 planes. The majority of these have been built for the Army, Navy, and Coast Guard (Douglas early recognized the fact that Uncle Sam was about the only reliable customer who could buy airplanes in large quantities and pay for them).

Douglas has ample reason to be proud of his planes. Beginning with his first plane, which won the Navy’s competition, his craft have steadily progressed in popularity and today, they are part of the standard equipment of the Army, Navy, and major American airlines. From the little shop in Los Angeles where the Cloudster was built, his plant organization has grown until it occupies a factory at Santa Monica covering 390,000 square feet of floor space and employing some 2,000 persons.