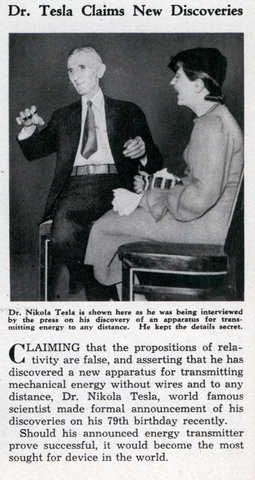 Dr. Tesla Claims New Discoveries
CLAIMING that the propositions of relativity are false, and asserting that he has discovered a new apparatus for transmitting mechanical energy without wires and to any distance, Dr. Nikola Tesla, world famous scientist made formal announcement of his discoveries on his 79th birthday recently.
Should his announced energy transmitter prove successful, it would become the most sought for device in the world.