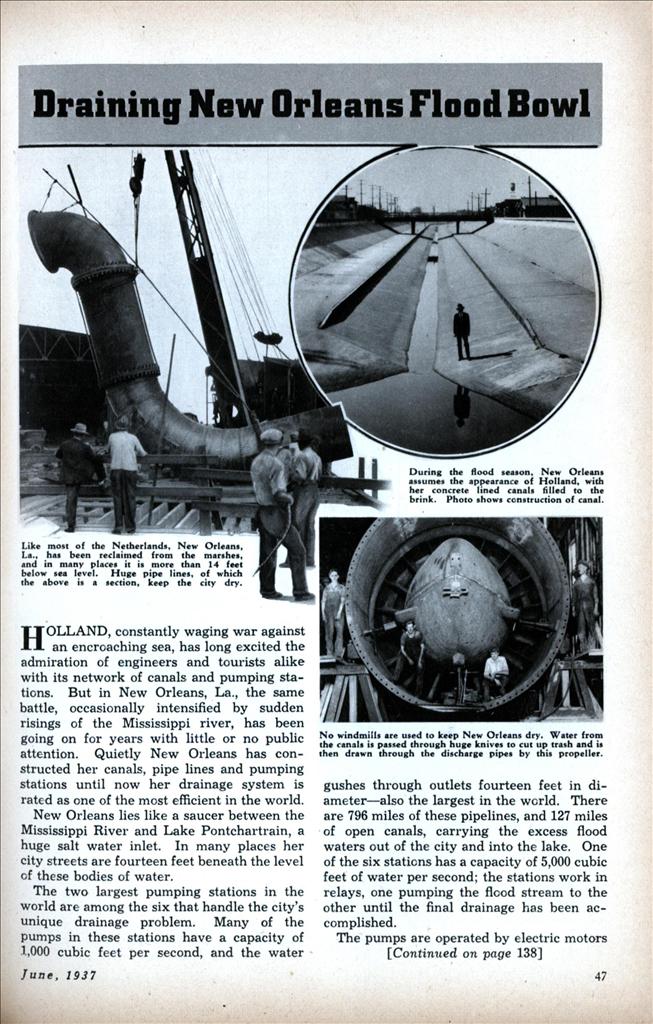 HOLLAND, constantly waging war against an encroaching sea, has long excited the admiration of engineers and tourists alike with its network of canals and pumping stations. But in New Orleans, La., the same battle, occasionally intensified by sudden risings of the Mississippi river, has been going on for years with little or no public attention. Quietly New Orleans has constructed her canals, pipe lines and pumping stations until now her drainage system is rated as one of the most efficient in the world.

New Orleans lies like a saucer between the Mississippi River and Lake Pontchartrain, a huge salt water inlet. In many places her city streets are fourteen feet beneath the level of these bodies of water.

The two largest pumping stations in the world are among the six that handle the city’s unique drainage problem. Many of the pumps in these stations have a capacity of 1,000 cubic feet per second, and the water gushes through outlets fourteen feet in diameter—also the largest in the world. There are 796 miles of these pipelines, and 127 miles of open canals, carrying the excess flood waters out of the city and into the lake. One of the six stations has a capacity of 5,000 cubic feet of water per second; the stations work in relays, one pumping the flood stream to the other until the final drainage has been accomplished. The pumps are operated by electric motors ranging from 600 to 1,200 horsepower. This dependency upon a central power plant is the only weakness in the system, but so far current failures have been of briefest duration, and the system has never been shut off long enough for any extensive damage to be done by the ever-menacing floods.

Before 1900 a large section of the present city of New Orleans was uninhabitable entirely, and the rest of the city was kept dry in a haphazard manner by means of primitive drainage canals, with pumping stations equipped simply with huge paddle wheels, such as those used on stern-wheeled river boats, operated by steam. For many years these clumsy, inefficient paddle wheels, churning the water in the canals, constituted the city’s only protection against the constantly overflowing Missippippi. The yearly damage during these years of inadequate protection ran into enormous figures, and the flood waters claimed lives as well as property.

After the propeller pumps were installed a new problem arose. The blades were constantly being clogged by trash and debris of all sorts that kept flowing through the miles of canals, much of it being fallen branches of trees and weeds from the banks of the unprotected canals. Crews of men were constantly employed to keep the canal banks cleared, and thousands of dollars were expended to line the banks of the main arteries. An improved pump was designed by the city engineers in which the propellers were placed above the water-line, instead of beneath it, vacuum pumps sucking out the air between the propeller blades and the water, and with electrically-operated trash-cutters preventing the water from carrying the refuse and trash up to the blades.

Each station operates its own controls with a switchboard, and is independent of the other stations—there is no central plant.

If huge Lake Pontchartrain and the gigantic Mississippi were both to begin emptying themselves into the bowl-bottom that is New Orleans, a dozen men at the control board of the half-dozen quiet-looking pumping stations could drain the city dry as fast as the floods poured in.