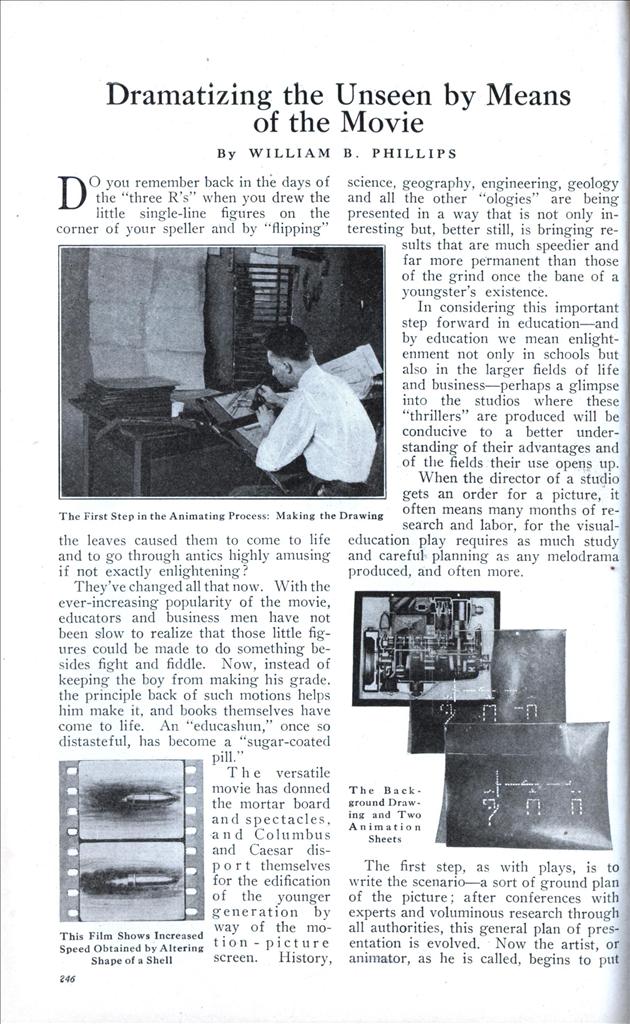 They’ve changed all that now. With the ever-increasing popularity of the movie, educators and business men have not been slow to realize that those little figures could be made to do something besides fight and fiddle. Now, instead of keeping the boy from making his grade, the principle back of such motions helps him make it, and books themselves have come to life. An “educashun,” once so distasteful, has become a “sugar-coated pill.”

The versatile movie has donned the mortar board and spectacles, and Columbus and Caesar disport themselves for the edification of the younger generation by way of the motion – picture screen. History, science, geography, engineering, geology and all the other “ologies” are being presented in a way that is not only interesting but, better still, is bringing results that are much speedier and far more permanent than those of the grind once the bane of a youngster’s existence.

In considering this important step forward in education—and by education we mean enlightenment not only in schools but also in the larger fields of life and business—perhaps a glimpse into the studios where these “thrillers” are produced will be conducive to a better understanding of their advantages and of the fields their use opens up.

When the director of a studio gets an order for a picture, it often means many months of research and labor, for the visual-education play requires as much study and careful planning as any melodrama produced, and often more.

The first step, as with plays, is to write the scenario—a sort of ground plan of the picture; after conferences with experts and voluminous research through all authorities, this general plan of presentation is evolved. Now the artist, or animator, as he is called, begins to put the result of this planning in a form that, shown consecutively, will explain the subject most clearly.

Let us take for the subject of this picture, the oiling system of the modern automobile engine. With blueprints and possibly a model before him, the animator makes each scene as directed in the scenario. A cross-section of the engine is first drawn on heavy cardboard, showing in minute detail and with exquisite workmanship each part, bolt or bearing that we would see if the engine were cut in half lengthwise.

Over this background a sheet of celluloid, very thin and transparent, is placed and kept in exact register by two perforations in the upper edge that fit over corresponding lugs projecting up through the background. On this cel- luloid, known as an animation sheet, the animator now proceeds to draw with paint or ink a representation of the oil in one position in the tubes. Placing another celluloid over this one he draws the oil in a position slightly more advanced.

After drawing several such sheets, each slightly different from the preceding one, a chain or series of drawings is formed showing progressively the course of the oil from the crank case and through the pump, the various tubes, channels, grooves and bearings back to the crank case to be filtered and used all over again. This series of drawings, when shown consecutively, will merge into a single picture showing the oil in motion, coursing through the tubes.

During the movement a little pointer draws attention to the features of the system as they are announced by small lettered cards that appear on the drawing; for instance, as we read that “from large end bearings the oil travels through a channel in each connecting rod to small end bearings, lubricating piston rings and cylinder walls,” the little pointer traces the course of the oil over this path.

It can easily be seen that not a few drawings will be necessary to explain the whole oiling system—and this number is but a small part of the total required for more complicated processes. There are sixteen pictures to the foot and as the scenario usually calls for from five hundred to a thousand or more feet, one can get some idea of the tremendous amount of work that goes into one of these pictures.

Usually the animation can be done on the sheets, but not uncommonly one background will not suffice and the action must be shown by a multitude of background drawings: quite often, too, accuracy demands that the animation must be made on thin tracing paper and the celluloids traced from this, thus doubling the number of drawings. Sometimes moving parts can be cut out and moved over the background while they are being photographed and time saved in this manner.

After the entire set of drawings are made, they go to the camera man for photographing; this in itself is quite an important task which takes considerable time and ingenuity, as many novel effects must often be brought out at this stage : fade-outs, phantom views, in which one may look through the outside of an object and see the interior in motion, double exposures and countless other stunts too numerous or too secret to mention.

In photographing, the background is first placed in the special frame, which is lighted at each side by mercury-vapor lights, and the animation sheets registered over this ; the glass cover is now clamped down. The camera is directly above this frame and is operated by a little crank placed conveniently within the operator’s reach; as many exposures as necessary are made by turning the handle either forward or backward the required number of times.

It is certainly a novel sight to watch the operator in dark goggles making these seemingly meaningless exposures under the intense greenish glare of the Cooper-Hewitts. The real action and meaning, however, become apparent after the developing, printing, inspecting, titling, retaking, revising and rearranging have taken place following the removal of the film.

It can then be seen how the dotted line on each celluloid, representing the oil, on being laid over the drawing of the engine registers on the oil tubes and how each succeeding celluloid shows the dots a little farther along in the tube. When the pictures are shown at the rate of sixteen per second, the dotted lines form a smooth, steady stream that looks like oil.

In a film recently brought out, showing the formation, of coal, antediluvian monsters were shown capering through prehistoric woodlands and the history of tens of thousands of years was shown in a few minutes as the forests underwent the changes that made trees into coal. In the final stage a cross-section of the earth was shown with human ants delving ever deeper and farther into these ancient jungles with modern mining machinery.