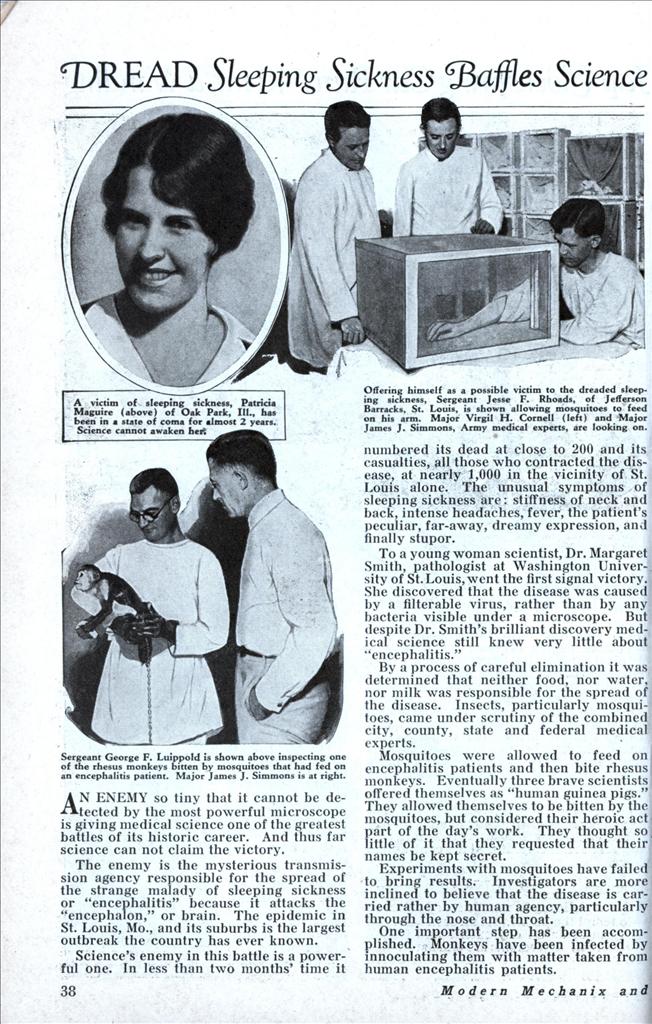 AN ENEMY so tiny that it cannot be detected by the most powerful microscope is giving medical science one of the greatest battles of its historic career. And thus far science can not claim the victory.

The enemy is the mysterious transmission agency responsible for the spread of the strange malady of sleeping sickness or “encephalitis” because it attacks the “encephalon,” or brain. The epidemic in St. Louis, Mo., and its suburbs is the largest outbreak the country has ever known.

Science’s enemy in this battle is a powerful one. In less than two months’ time it numbered its dead at close to 200 and its casualties, all those who contracted the disease, at nearly 1,000 in the vicinity of St. Louis alone. The unusual symptoms of sleeping sickness are: stiffness of neck and back, intense headaches, fever, the patient’s peculiar, far-away, dreamy expression, and finally stupor.

To a young woman scientist, Dr. Margaret Smith, pathologist at Washington University of St. Louis, went the first signal victory. She discovered that the disease was caused by a filterable virus, rather than by any bacteria visible under a microscope. But despite Dr. Smith’s brilliant discovery medical science still knew very little about “encephalitis.”

By a process of careful elimination it was determined that neither food, nor water, nor milk was responsible for the spread of the disease. Insects, particularly mosquitoes, came under scrutiny of the combined city, county, state and federal medical experts.

Mosquitoes were allowed to feed on encephalitis patients and then bite rhesus monkeys. Eventually three brave scientists offered themselves as “human guinea pigs.” They allowed themselves to be bitten by the mosquitoes, but considered their heroic act part of the day’s work. They thought so little of it that they requested that their names be kept secret.

Experiments with mosquitoes have failed to bring results. Investigators are more inclined to believe that the disease is carried rather by human agency, particularly through the nose and throat.

One important step has been accomplished. Monkeys have been infected by innoculating them with matter taken from human encephalitis patients.