Why is his dream of the future that men will be fully mature at 10 years of age? Does he not like children? Or like them too much? 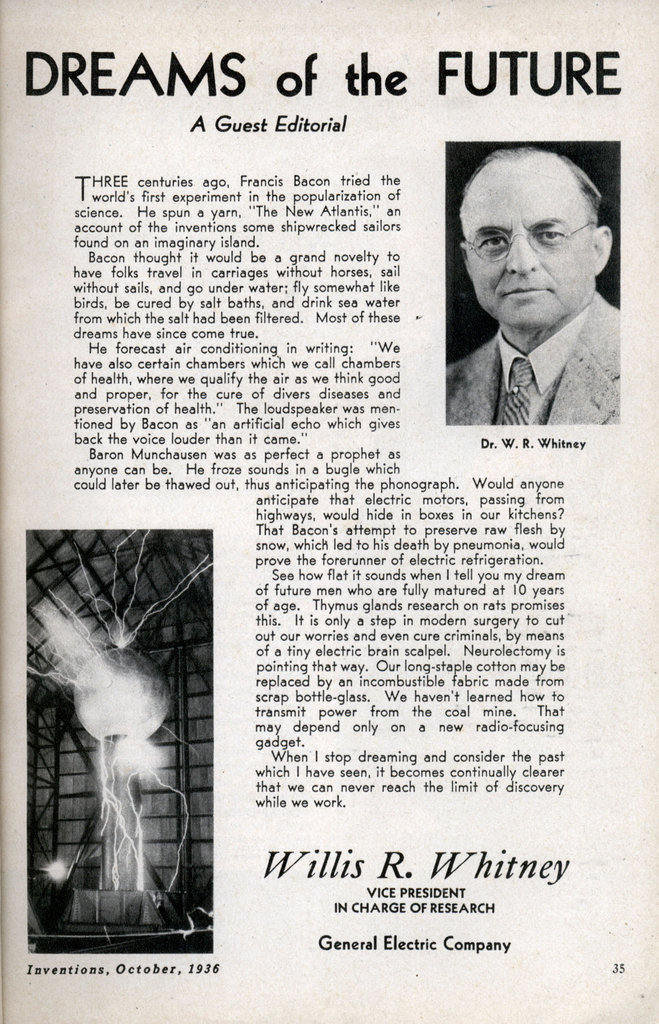 DREAMS of the FUTURE

THREE centuries ago, Francis Bacon tried the world’s first experiment in the popularization of science. He spun a yarn, “The New Atlantis,” an account of the inventions some shipwrecked sailors found on an imaginary island.

Bacon thought it would be a grand novelty to have folks travel in carriages without horses, sail without sails, and go under water; fly somewhat like birds, be cured by salt baths, and drink sea water from which the salt had been filtered. Most of these ” dreams have since come true.

He forecast air conditioning in writing: “We have also certain chambers which we call chambers of health, where we qualify the air as we think good and proper, for the cure of divers diseases and preservation of health.” The loudspeaker was mentioned by Bacon as “an artificial echo which gives back the voice louder than it came.”

Baron Munchausen was as perfect a prophet as anyone can be. He froze sounds in a bugle which could later be thawed out, thus anticipating the phonograph. Would anyone anticipate that electric motors, passing from highways, would hide in boxes in our kitchens? That Bacon’s attempt to preserve raw flesh by snow, which led to his death by pneumonia, would prove the forerunner of electric refrigeration.

See how flat it sounds when I tell you my dream of future men who are fully matured at 10 years of age. Thymus glands research on rats promises this. It is only a step in modern surgery to cut out our worries and even cure criminals, by means of a tiny electric brain scalpel. Neurolectomy is pointing that way. Our long-staple cotton may be replaced by an incombustible fabric made from scrap bottle-glass. We haven’t learned how to transmit power from the coal mine. That may depend only on a new radio-focusing gadget.

When I stop dreaming and consider the past which I have seen, it becomes continually clearer that we can never reach the limit of discovery while we work.