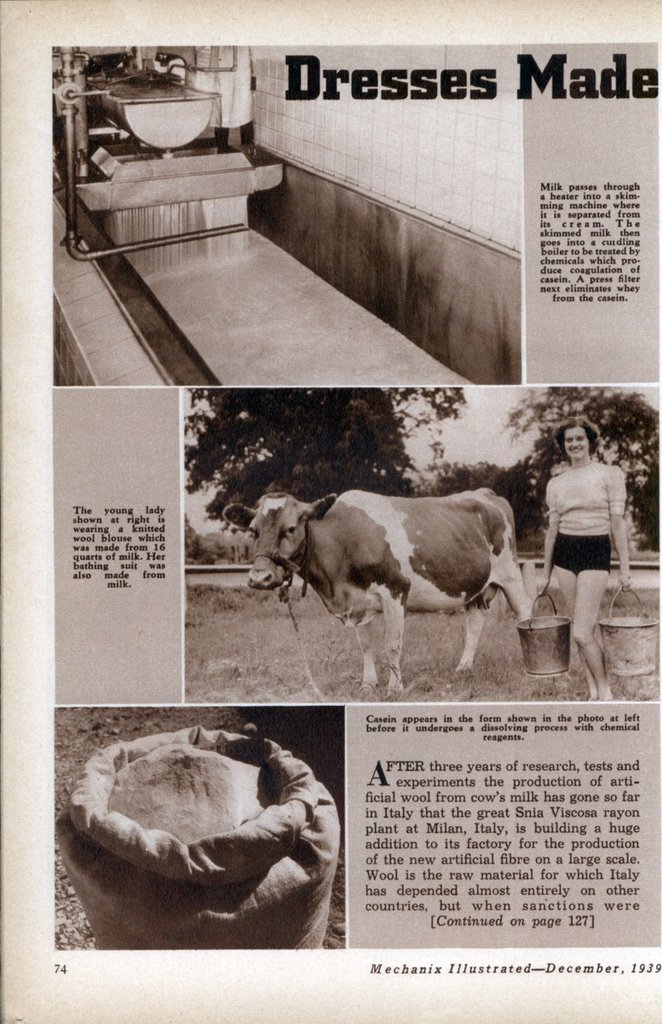 Dresses Made From Milk

AFTER three years of research, tests and experiments the production of artificial wool from cow’s milk has gone so far in Italy that the great Snia Viscosa rayon plant at Milan, Italy, is building a huge addition to its factory for the production of the new artificial fibre on a large scale. Wool is the raw material for which Italy has depended almost entirely on other countries, but when sanctions were threatened during the Ethiopian conquest Italy turned to the development of a substitute. The new material is the result.

In producing artificial wool milk is weighed and passed through a heater into a skimming machine, where it is separated from its cream. The skimmed milk passes into a curdling boiler to be treated by chemicals which produce coagulation of the casein suspended in the milk. The casein thus collected is sent by a casein hoist into a press filter, where whey is eliminated. The solid casein goes to a mixer to be dissolved by chemical reagents and then is sent on to maturing and filtering tanks.

Again in liquid form, the casein is forced through a spinneret of platinum containing 600 minute holes calibrated to the finest precision standards. It then passes through a precipitating bath which solidifies it into filaments. The filaments are carried as fine white wool threads, each consisting of many filaments, to small rotating cylinders on which they go to cutting machines to be cut into desired lengths.