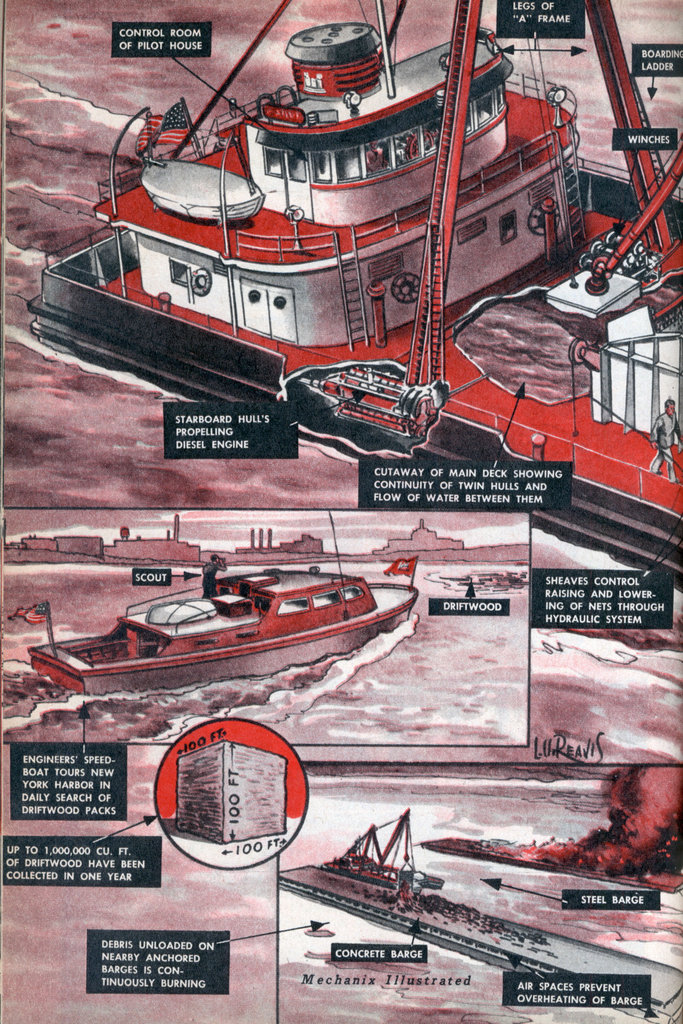 Army engineers have contrived a twin-hulled vessel that ploughs right into harbor driftwood and carries it away.

UNCLE SAM’S Army engineers have devised a floating “hyacinth machine” and a “snag remover” to eradicate persistent evils in inland waters and now, facing the increasing menace of driftwood in New York’s harbor, they have contrived another marine contraption which, like a steam shovel’s bucket, ploughs right into its objective and carries it away.

The operation is beautifully simple. Utilizing the twin-hulled principle of the catamaran, the new “self-propelled driftwood collector”—for whose construction bids have recently been asked —will have two walled-in wells, forward between the hulls, in which strong steel hydraulically-operated nets are suspended from fore-and-aft transverse bars. The nets when lowered serve as scoops. When the vessel charges into a flotilla of driftwood the nets trap and scoop it up.

Look at the picture. The forward net, lowered into the water, forms roughly the shape of the letter L with the open part ahead. As the vessel moves into the driftwood pack, fragments caught between the advancing prows of the hulls are forced into the gaping mouth of the front net, while the water swirls easily back between the hulls to emerge at the stern. There’s no need to stop the craft, no obstacle from pent-up water. The second net, just behind the first, remains elevated, inactive, until the front net becomes sufficiently loaded and is raised; then it repeats the scooping process.

Note the cables hanging from the booms. Those hooks engage in loops on the net bars. When the nets are filled and crew members have secured a degree of order in the jumble of drift pieces the “hoist away” signal is transmitted to the control room; then the winches turn and the straining cables rise. Rollers on the bars’ extremities neatly follow small tracks inboard from the “wings” of the walls. The load, stabilized, is swung over to a barge by the boom and, with the release of one end of a net, its contents are quickly dropped. This means that after the nets have been filled the vessel must dispose of their contents before the process of refilling can be resumed.

Let’s go back to the beginning. Whence comes this driftwood? Why is it so dangerous that back in 1915 an act of Congress provided funds for its detection, collection and elimination? Oddly enough, very few persons, even around New York’s waterfront, know the answers.

From far up the Hudson river, from various streams emptying into New York’s Upper and Lower Bays, and from some of the wharves of the harbor come the miscellaneous planks, logs, fragments from rotting wharves and piling, wooden boxes (illegally thrown into the water), and occasional animal debris. Tossed by wind and tide, masses of material tend to accumulate. Much becomes waterlogged, scarcely visible on the surface. In the greatest port in the United States this means danger. Finely-tapered ships’ propellers may become fouled, blades broken. Thin-hulled plywood craft may be holed. Aircraft alighting on the East River and taxiing toward seaplane and amphibian ramps are endangered.

Wartime shipping first threw a searchlight on the driftwood menace. Vessels were then specially used to “sweep the streets” of the harbor. Since then operations have become rigidly systematized. On a full eight-hour daily patrol an observer in a 40-foot speedboat inspects the extensive surface of the harbor and adjacent waters and, on sighting masses of debris, radios his discovery to the collectors. Under the present system the engineers have been using from one to six collecting vessels every day—and sometimes, in the middle of summer, because of the important tidal effect of the full moon, working 16 hours to the day. Collectors now employed are barges designed with steel nets held just below the surface of the water and towed by steam lighters. It is easily seen that the new catamaran-type, soon to be built, will give a vast improvement in service.

What to do with the stuff after it is collected? The least complex and expensive solution is burn it. Therein lies the explanation of the almost continuous pall of smoke lingering near Robbin’s Reef on the New Jersey side of the Hudson river opposite Manhattan Island. Two incinerating barges, 230 feet long, 30 feet in the beam, one of steel, the other of concrete, are anchored off-shore there.

With two 300-hp direct-connected Diesel engines—one in each hull—the new catamaran collector will be able to speed to the incinerating barges at ten miles per hour with full load, turn around and quickly return to attack the floating menace of harbor driftwood. It will have a daily capacity of 4,000 to 5,000 cubic feet of debris, equivalent to the consents of three, to four gondola freight cars.