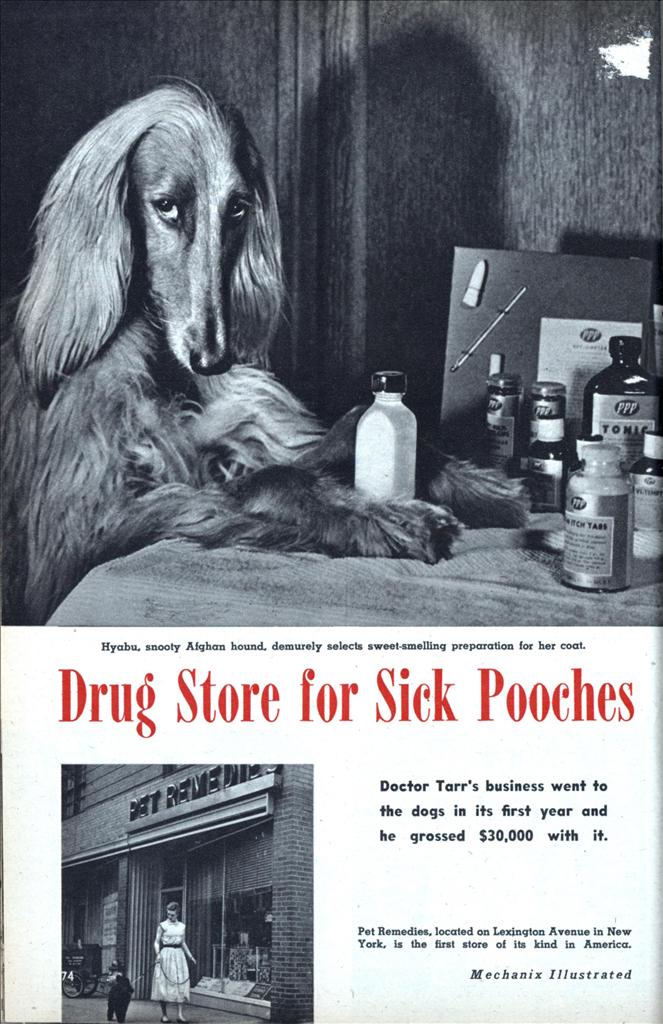 Doctor Tarr’s business went to the dogs in its first year and he grossed $30,000 with it.

“HOW to get rich?” is an ever recurring XI question, and one reasonable answer, contributed by Henry Kaiser, the famous industrialist and speed king of ship builders, is: “Render a needed new service.”

Veterinarian Lewis M. Tarr may not have heard about this remark, but he followed the advice with great success. He opened what is probably America’s and perhaps the world’s first pet drug store!

A strapping six-footer now in his late thirties, Dr. Tarr was born in New York, lived in Akron, Ohio, and attended college in Fort Collins, Colorado. After graduation he worked for the Federal Food and Drug Administration, then started private practice in New York five years ago.

In answer to our question: “How did you get the idea for a pet drug store?”, Dr. Tarr explained: “The needs of pets and humans for keeping well are very similar. Pets, too, need a balanced diet, supplemented by vitamins and minerals.

“We humans can go to the drug store and buy remedies for common ailments, get vitamins, minerals, or tonics in a great variety. For pets, however, there were no such products.

“Owners occasionally use human medicines for curing their pets, but the results are unsatisfactory, sometimes harmful or even fatal, because while the ingredients are similar, there is an important difference in dosage between remedies meant for humans and pets.

“I decided to fulfill the obvious need for a pet drug store, selling easy to use medications to be administered at home. I made a list of the items needed, persuaded manufacturers of the necessary medicines and other products to pack their wares in doses suitable for pets, and started to manufacture the items I could not get otherwise.”

Today, Dr. Tarr and his assistant, Sal Arena, can just about manage the volume of work that keeps pouring in. Pet owners come to the store from all over the city, while mail orders arrive from as far away as Florida, Idaho, Vermont, and even Canada.

The store itself is clean and uncluttered. Plenty of unused floor space is left to keep customers’ pets far enough apart, outside of fighting range. To further discourage battles the linoleum floor is kept well waxed; it is fine for walking but becomes awful slippery when the would-be warriors try to get a toehold on it!

The secret of Dr. Tarr’s success? We think it can be found in that remark: “Render a needed new service.”—Joseph Foldes