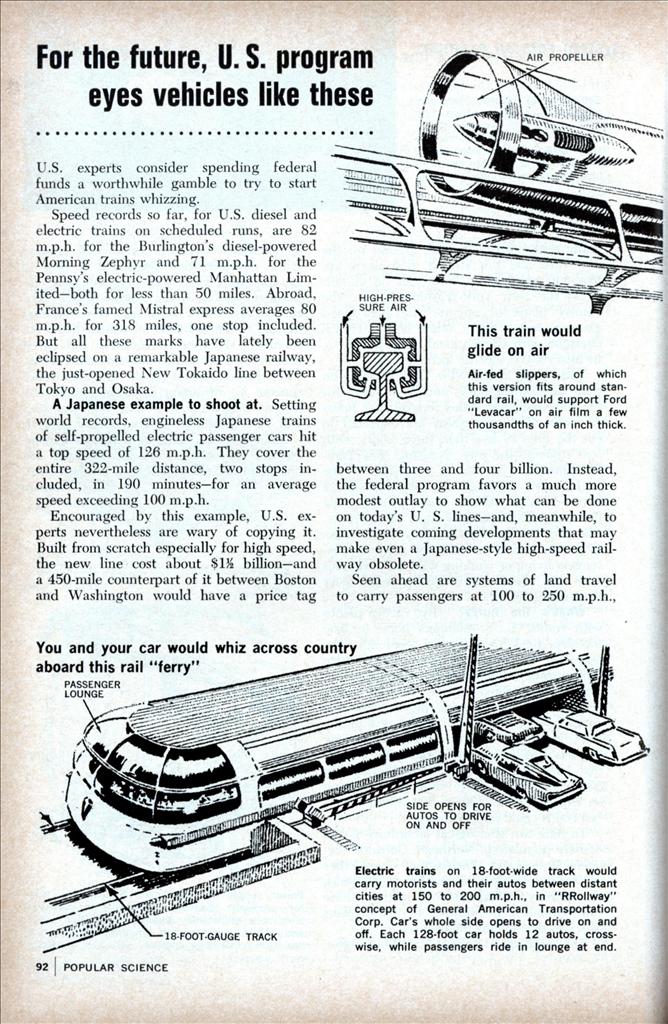 Electric cars will soon cut travel time between New York and Washington, in a bold U. S. program to speed travel by rail

By ALDEN P. ARMAGNAC
DRAWINGS BY HENRY B. COMSTOCK

All a-BOARD! Psshhh-the doors slide closed. The silvery train leaps forward. Back into your seat cushion you go, as if in an airplane taking off. No nonsense about it, this train’s really going to ride—in just 150 seconds it will accelerate to 125 m.p.h., more than two miles a minute. For it aims to get you to your destination in a travel time matching that by air—maybe less.

Americans are due to ride the first of these superspeed trains this year, possibly as early as next fall. That’s when delivery is expected of a substantial part of a fleet of 50 self-propelled electric passenger cars, capable of a record-breaking top speed of 150 m.p.h. Assembled in engine-less trains of four to 10 cars, they’ll immediately go into actual passenger service on the Pennsylvania Railroad’s 226-mile line between New York and Washington.

At the same time or soon after, three to five passenger cars propelled by gas turbines are scheduled to inaugurate extra-fast service on the New Haven’s 45-mile run between Boston and Providence.

U. S. sparks the program. The exciting new high-speed trains will be the first result of a three-year, $90-million U. S. program to speed travel on land. Sponsored by the Department of Commerce, the bold project has just been launched by Congress’ passage of the High Speed Ground Transportation Act of 1965. Its initial aim, which might be called “High Speed Now,” will be to demonstrate how far today’s technology can boost the speed of railroad travel on existing electric and non-electric lines. A longer-range aim, “High Speed in the Future” will be to look into unconventional systems of ground transport that may revolutionize intercity travel within the next 15 to 20 years.

To get High Speed Now trials going on the New York-Washington run, the government will put up the money to buy 28 of the 150-m.p.h. cars. The Pennsy, maintaining that a conclusive test will take 50, plans to buy the rest. They may be under construction by the time this is read. While prospective bidders still awaited detailed specifications at this writing, advance reports of the cars’ features indicate that they’ll be the finest passenger equipment in the world.

The stainless-steel cars, 85 feet long and extra wide for spacious comfort, will carry 80 passengers apiece in reclining seats. Four mighty, 150-hp. electric motors, one to each axle, will provide the power required for their speed. Air-operated sliding doors, remotely controlled, will expedite passengers’ entry and exit to save time at station stops. Snack bars will serve light meals. Built in will be electric heating, no-draft air conditioning, low overhead racks, reading lights. Within the cars, despite their speed, there will be no more noise than in a modern executive office.

Entirely new to railroading today are self-propelled gas-turbine cars, the kind to be tried on the Boston-Providence run. A preview of them is given by plans to build one for the Long Island Rail Road. Designed by a leading car maker, the Budd Co., this car will be driven by two gas turbines of 450 hp. each, mounted on the wheel trucks at each end. Hydraulic transmissions will deliver power from the turbine shafts to the car axles. The light weight of modern gas turbines, about one pound per horsepower, especially suits them for high-speed rail cars on non-electrified routes.

Why no locomotives? Engineless trains, whether of electric or gas-turbine cars, will oiler many advantages in high-speed service. Even distribution of weight throughout the train will give faster and smoother acceleration and braking. It will also spare the track the terrific pounding that would be administered by a heavy locomotive’s two-mile-a-minute pace. At the end of a run, the self-propelled cars will permit a quick turnaround, needing no switching engine to make them up into new trains of any desired length.

Superspeed trains will need an improved right-of-way, to make their ride safe and comfortable. So the Pennsy is bettering its already top-class trackage between New York and Washington—by straightening curves, strengthening bridges, improving systems of signals and overhead-wire power supply. It will raise station platforms, too, to the level of the new cars’ sliding doors.

Especially intensive upgrading will make one 20-mile length of straightaway track, between New Brunswick and Trenton, virtually a high-speed proving ground for the new cars. On this stretch, passengers are likely to see what a train can do all-out.

On the New York-Washington run, the Pennsy plans to operate the high-speed glamour trains every other hour. They’ll alternate with conventional ones, pulled by its husky GG-1 electric locomotives.

Today, the fastest New York-Washington train takes three hours and 35 minutes for the run, and most trains require four hours or more. The new trains are expected to cut the time to less than three hours, with four stops on the way. Nonstop New York-Washington runs, to be included in the trials, may approach a phenomenal 2/2 hours. There will be nonstop runs, too, between various pairs of cities on the route. Allowing for the time it takes air travelers to get to and from outlying airports, passengers living or working near rail terminals may find these train trips actually faster than going by air.

What’s the hurry? By racing planes with trains, U. S. planners hope to woo travelers back to the rails—seemingly, the only way to cope with tomorrow’s outsize transportation needs. Travel between U. S. cities has doubled in the last 15 years, and will reach staggering proportions in a couple of decades more. Highway building can’t keep pace. Sites available for new airports are so remote from city centers that New York is seriously considering one 50 to 60 miles away. For people going on trips of up to 400 or 500 miles, super-fast trains could be the answer.

To find out, the logical laboratory is the densely populated “Northeast Corridor” between Boston and Washington, whose cities are fusing into one continuous megalopolis, or supercity. What’s learned in trials there can ultimately be applied to mainstreams of travel throughout the country.

The high-speed New York-Washington and Boston-Providence trains will operate for a demonstration period of a year to 18 months. That will conclude the experiment so far as the government is concerned, and the U.S.-bought cars will then be sold to the railroads on which they were running. Whether to continue the speed runs will be up to the railroads themselves. That should depend on the glamour trains’ success in attracting passengers—and collecting ticket statistics that tell the story will be a vital part of the federal project. Since the outcome admittedly is a gamble, the railroads understandably have felt unable to risk the experiment on their own.

Speed records so far, for U.S. diesel and electric trains on scheduled runs, are 82 m.p.h, for the Burlington’s diesel-powered Morning Zephyr and 71 m.p.h, for the Pennsy’s electric-powered Manhattan Limited—both for less than 50 miles. Abroad, France’s famed Mistral express averages 80 m.p.h, for 318 miles, one stop included. But all these marks have lately been eclipsed on a remarkable Japanese railway, the just-opened New Tokaido line between Tokyo and Osaka.

Encouraged by this example, U.S. experts nevertheless are wary of copying it. Built from scratch especially for high speed, the new line cost about $1/2 billion—and a 450-mile counterpart of it between Boston and Washington would have a price tag between three and four billion. Instead, the federal program favors a much more modest outlay to show what can be done on today’s U. S. lines—and, meanwhile, to investigate coming developments that may make even a Japanese-style high-speed railway obsolete.

Seen ahead are systems of land travel to carry passengers at 100 to 250 m.p.h., or more—in vehicles so radical that their tracks no longer are called railways, hut “guideways.” More than half the federal program’s funds will go for the first really thorough study of a variety of these far-out schemes.

“New concepts that appear to merit investigation include mass transport of automobiles on rail ‘ferries,’ vehicles sup- ported by a layer of air, and rail-guided systems that differ from conventional track,” says Secretary of the Interior John T. Connor. Accompanying illustrations show examples of some of the unconventional ideas he’s talking about. Thus the current program will seek to learn, not only how fast our present railroads can carry us, hut what may come next.