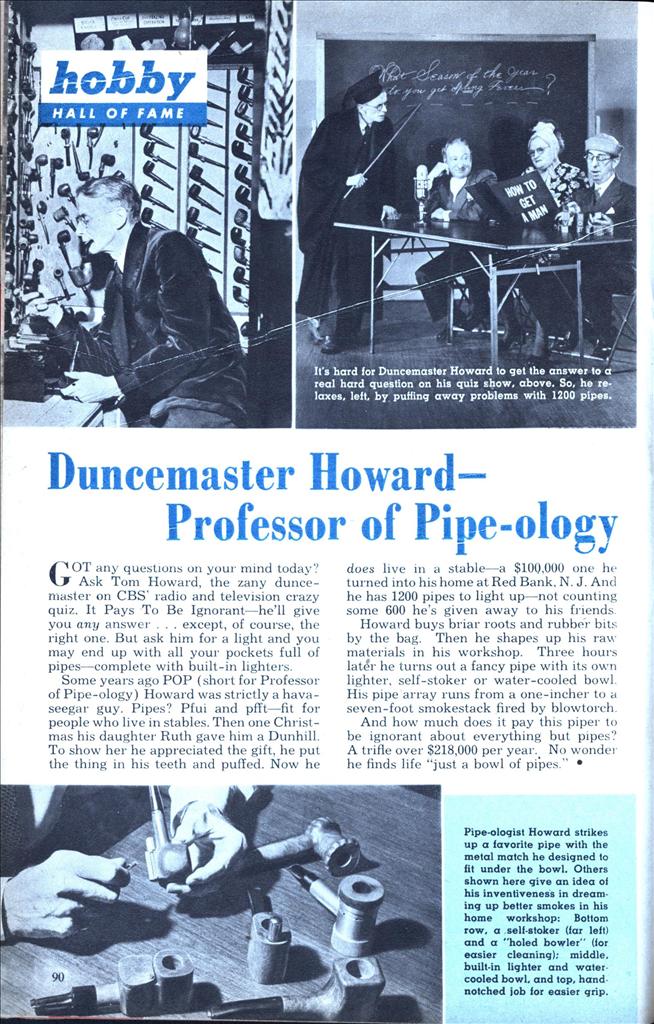 GOT any questions on your mind today?

Ask Tom Howard, the zany dunce-master on CBS’ radio and television crazy quiz. It Pays To Be Ignorant—he’ll give you any answer . . . except, of course, the right one. But ask him for a light and you may end up with all your pockets full of pipes—complete with built-in lighters.

Some years ago POP (short for Professor of Pipe-ology) Howard was strictly a hava-seegar guy. Pipes? Pfui and pfft—fit for people who live in stables. Then one Christmas his daughter Ruth gave him a Dunhill. To show her he appreciated the gift, he put the thing in his teeth and puffed. Now he does live in a stable—a $100,000 one he turned into his home at Red Bank, N. J. And he has 1200 pipes to light up—not counting some 600 he’s given away to his friends.

Howard buys briar roots and rubber bits by the bag. Then he shapes up his raw materials in his workshop. Three hours later he turns out a fancy pipe with its own lighter, self-stoker or water-cooled bowl. His pipe array runs from a one-incher to a seven-foot smokestack fired by blowtorch.

And how much does it pay this piper to be ignorant about everything but pipes? A trifle over $218,000 per year. No wonder he finds life “just a bowl of pipes.”