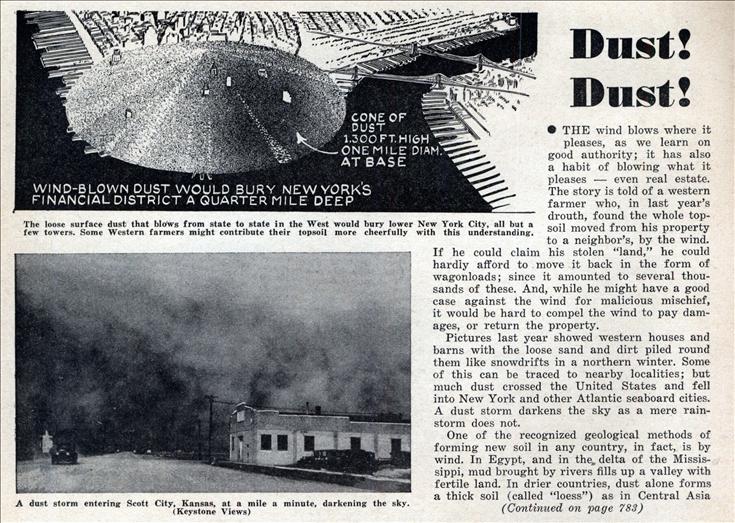 • THE wind blows where it pleases, as we learn on good authority; it has also a habit of blowing what it pleases — even real estate. The story is told of a western farmer who, in last year’s drouth, found the whole top-soil moved from his property to a neighbor’s, by the wind. If he could claim his stolen “land,” he could hardly afford to move it back in the form of wagonloads; since it amounted to several thousands of these. And, while he might have a good case against the wind for malicious mischief, it would be hard to compel the wind to pay damages, or return the property.

Pictures last year showed western houses and barns with the loose sand and dirt piled round them like snowdrifts in a northern winter. Some of this can be traced to nearby localities; but much dust crossed the United States and fell into New York and other Atlantic seaboard cities. A dust storm darkens the sky as a mere rainstorm does not.

One of the recognized geological methods of forming new soil in any country, in fact, is by wind. In Egypt, and in the,, delta of the Mississippi, mud brought by rivers fills up a valley with fertile land. In drier countries, dust alone forms a thick soil (called “loess”) as in Central Asia and Western America. It has been calculated by Prof. J. A. Udden that, in an average year, 850 million tons of dust is moved an average of 1,440 miles by the wind in the United States; a trillion and a quarter “mile-tons,” as railroad freight is measured. In 1929 the railroads of America handled only four hundred and fifty billion mile-tons of freight—about a third as much. And this does not include the wind’s “local traffic”—mere carrying of dust back and forth in the same county, to annoy farmers who didn’t want to trade.