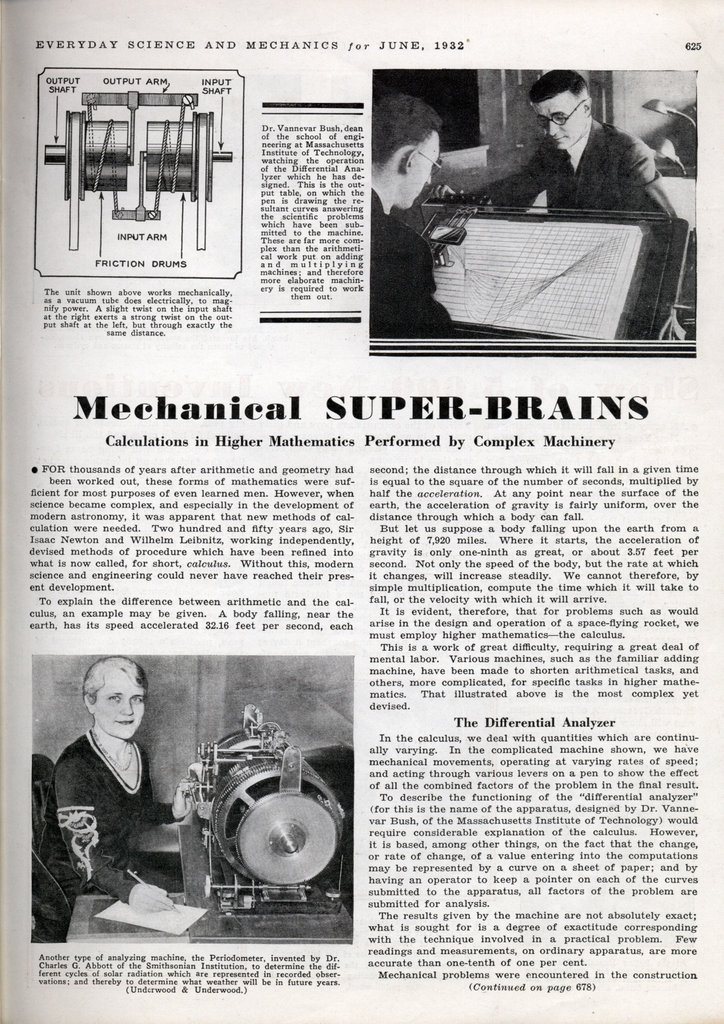 â€¢ FOR thousands of years after arithmetic and geometry had been worked out, these forms of mathematics were sufficient for most purposes of even learned men. However, when science became complex, and especially in the development of modern astronomy, it was apparent that new methods of calculation were needed. Two hundred and fifty years ago, Sir Isaac Newton and Wilhelm Leibnitz, working independently, devised methods of procedure which have been refined into what is now called, for short, calculus. Without this, modern science and engineering could never have reached their present development.

To explain the difference between arithmetic and the calculus, an example may be given. A body falling, near the earth, has its speed accelerated 32.16 feet per second, each second; the distance through which it will fall in a given time is equal to the square of the number of seconds, multiplied by half the acceleration. At any point near the surface of the earth, the acceleration of gravity is fairly uniform, over the distance through which a body can fall.

But let us suppose a body falling upon the earth from a height of 7,920 miles. Where it starts, the acceleration of gravity is only one-ninth as great, or about 3.57 feet per second. Not only the speed of the body, but the rate at which it changes, will increase steadily. We cannot therefore, by simple multiplication, compute the time which it will take to fall, or the velocity with which it will arrive.

It is evident, therefore, that for problems such as would arise in the design and operation of a space-flying rocket, we must employ higher mathematicsâ€”the calculus.

This is a work of great difficulty, requiring a great deal of mental labor. Various machines, such as the familiar adding machine, have been made to shorten arithmetical tasks, and others, more complicated, for specific tasks in higher mathematics. That illustrated above is the most complex yet devised.

In the calculus, we deal with quantities which are continually varying. In the complicated machine shown, we have mechanical movements, operating at varying rates of speed; and acting through various levers on a pen to show the effect of all the combined factors of the problem in the final result.

To describe the functioning of the “differential analyzer” (for this is the name of the apparatus, designed by Dr. Vannevar Bush, of the Massachusetts Institute of Technology) would require considerable explanation of the calculus. However, it is based, among other things, on the fact that the change, or rate of change, of a value entering into the computations may be represented by a curve on a sheet of paper; and by having an operator to keep a pointer on each of the curves submitted to the apparatus, all factors of the problem are submitted for analysis.

The results given by the machine are not absolutely exact; what is sought for is a degree of exactitude corresponding with the technique involved in a practical problem. Few readings and measurements, on ordinary apparatus, are more accurate than one-tenth of one per cent.

Mechanical problems were encountered in the construction of the machine; particularly that of taking up backlash in the driving apparatus. It was checked by setting the machine to solve a problem the mathematical answer of which is known to be a circle; and compensating this.

The sketch at the head of this article shows one of a number of units which are incorporated in this device, for the purpose of moving parts in exact correspondence to an applied signal. The operation of tightening on a revolving drum a friction band which is wrapped around another drum, revolving in the opposite direction, has the effect of multiplying the force of the pull; somewhat as variation of input voltage on the grid of a vacuum tube produces a corresponding, but GREATER voltage change in the plate coupling device. The analogy extends to the fact that the mechanical amplifier, like the tube amplifier, can oscillate; and it does so when its amplification fact is too highâ€”because of output energy being fed back into the input. This was overcome by the use of a flywheel, loose on the shaft and revolving with it only through friction, to damp out oscillations.

The whole machine, as constructed, has eighteen shafts, through which varying factors may be regulated. It fills a good-sized room. Yet, as its constructor says: “It is not yet completed; it is questionable whether it will ever be complete, for it can always be extended by the addition of units to cover greater order or complexity of equations.”

Another machine, illustrated below on the same page, has for its specific purpose the separation of a complex curve into its components. As those who are interested in radio theory know, a ‘modulated’ wave may be considered as the sum of a number of waves. This machine, with its brass cylinders tracing an irregular curve, is intended to show the simpler curves which lie beneath.

For instance, the heat received from the sun fluctuates slightly from day to day; and the Smithsonian Institution has long been conducting a survey based on continual readings, taken in different parts of the world. The purpose of this machine, invented for purposes of the solar survey, is to render it possible, by a knowledge of the different cycles affecting solar variation, to plot the heat to be received, and therefore the weather, for a number of years in the future.