The explanation given sounds roughly like how an LCD works. What do you think the mystery material was that went transparent when current was applied? 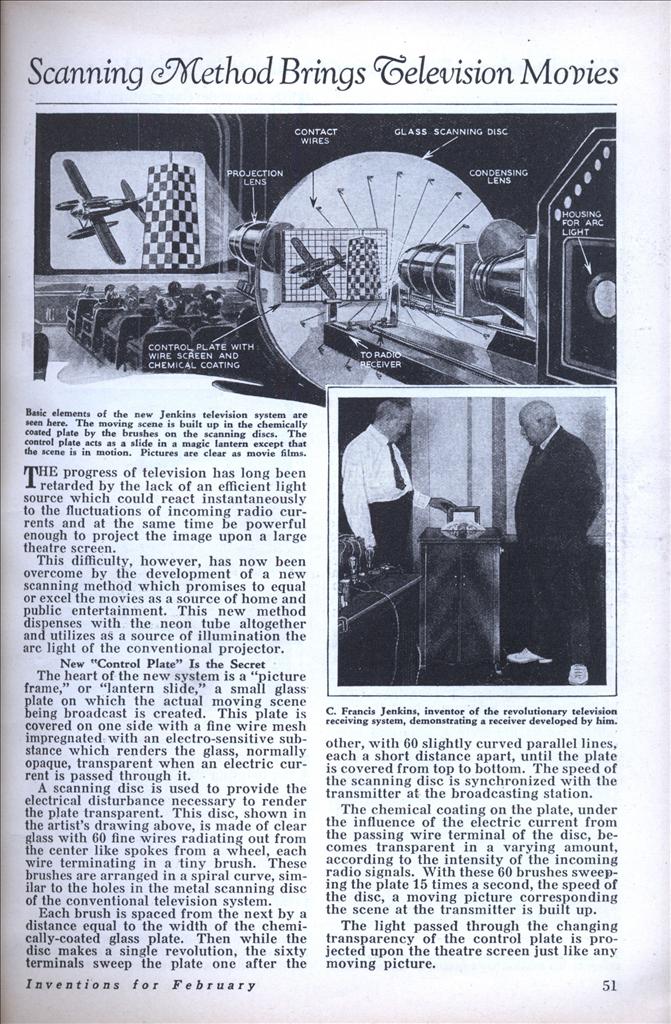 THE progress of television has long been retarded by the lack of an efficient light source which could react instantaneously to the fluctuations of incoming radio currents and at the same time be powerful enough to project the image upon a large theatre screen.

This difficulty, however, has now been overcome by the development of a new scanning method which promises to equal or excel the movies as a source of home and public entertainment. This new method dispenses with the neon tube altogether and utilizes as a source of illumination the arc light of the conventional projector.

New “Control Plate” Is the Secret The heart of the new system is a “picture frame,” or “lantern slide,” a small glass plate on which the actual moving scene being broadcast is created. This plate is covered on one side with a fine wire mesh impregnated with an electro-sensitive substance which renders the glass, normally opaque, transparent when an electric current is passed through it.

A scanning disc is used to provide the electrical disturbance necessary to render the plate transparent. This disc, shown in the artist’s drawing above, is made of clear glass with 60 fine wires radiating out from the center like spokes from a wheel, each wire terminating in a tiny brush. These brushes are arranged in a spiral curve, similar to the holes in the metal scanning disc of the conventional television system.

Each brush is spaced from the next by a distance equal to the width of the chemically-coated glass plate. Then while the disc makes a single revolution, the sixty terminals sweep the plate one after the other, with 60 slightly curved parallel lines, each a short distance apart, until the plate is covered from top to bottom. The speed of the scanning disc is synchronized with the transmitter at the broadcasting station.

The chemical coating on the plate, under the influence of the electric current from the passing wire terminal of the disc, becomes transparent in a varying amount, according to the intensity of the incoming radio signals. With these 60 brushes sweeping the plate 15 times a second, the speed of the disc, a moving picture corresponding the scene at the transmitter is built up.

The light passed through the changing transparency of the control plate is projected upon the theatre screen just like any moving picture.